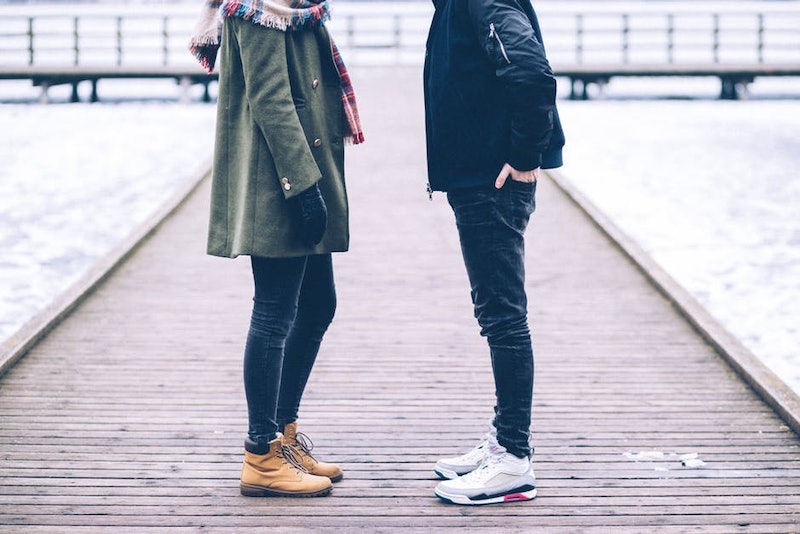 It's always a good idea, as the social beings we are, to be aware of little habits that make you difficult to get along with. This can come in handy when out with friends, on dates, and when spending tons of time with coworkers. Are you coming off as likable, friendly and helpful? Or are you putting people off? It is possible to pay attention and change your ways, if necessary.

That's not to say, however, that you need to worry 24/7 about getting along with everyone. As long as you're polite and respectful, then it doesn't really matter if you befriend the entire planet. I'm just talking about having awareness and (when you feel like it) laying on the charm to be more likable.

"When you are able to recognize that you are on the path to turning off people, you can stop yourself and think through your actions," says life and career coach Gia Ganesh, in an email to Bustle. "Most of the difficult habits in people are a default or a reactionary behavior. Interrupting the pattern of these reactionary behaviors starts with recognizing the habits in oneself as they occur."

Once you can do that, you'll be able to go up to anyone and knock their socks off with your charm and friendliness. But first, read on for examples of habits of what not to do, and why these habits might be getting in the way.

1. Turning Everything Into An Argument

Being a bit cranky and argumentative when you're stressed is one thing. But take note if you're turning into what's known as an "auto-arguer." As certified executive coach Tim Toterhi says, "People with this tendency often start sentences with 'Yea, but...' and go on to poke holes in whatever their conversation partner has said." He tells me this frustrating habit can put on a strain on relationships, and I can totally see why.

2. Being Honest At Any Cost In Conversations

Honesty is always the best policy and all that. But we all have that one friend (or we are that friend) who is honest to a fault. As psychologist Dr. Nikki Martinez tells me, those of us who are "honest at all costs" are often only looking for an excuse to say whatever we want. This usually results in rude comments and hurt feelings, and that's not OK.

I hate awkward silences, so I totally understand the desire to fill them with a question or a joke. And yet, this is a habit that can put others off. As licensed social worker Laura MacLeod, LMSW says, "Silence is important and needed for processing information, thinking through a problem or just relieving stress and resting." Stepping on that peace can make people want to leave the convo, and quick.

4. Failing To See The Positive Side Of Things

While you don't have to be sunny 24/7, it's often a good idea to monitor how many negative comments you contribute to a conversation. As Ganesh tells me, downer remarks and negativity can put a bad taste in everyone's mouth and leave them wanting to run away. Not good.

If someone has asked for your kind criticism, then go ahead and spill it. But doling out critiques on the regular to everyone and anyone? That's not as OK. As Ganesh says, "... constant criticism drains the recipient and is a sure fire way to turn off other people."

It's normal to get excited during a conversation and step on the end of someone's sentence. But if people seem to get frustrated when you chat, it may be that you're interrupting a little too often. "You end up feeling like you can't get a complete thought across without the conversation becoming derailed," relationship counselor Julienne B. Derichs, LCPC tells Bustle. And that's not cool.

7. Getting Upset When Things Don't Go Your Way

Sometimes plans fall through or things get screwed up at work. The next time this happens, check in with yourself. Do you automatically get upset things didn't go your way? Or did you roll with the punches? As Ganesh tells me, people get along better with those who remain calm and don't get upset. While not always possible, it's a very likable trait.

8. Not Truly Listening When Someone Speaks

People can totally tell when you're only half listening, and it's not very likable. "We all have a basic need to feel validated or acknowledged," says licensed clinical psychologist Dr. Helen Odessky, Psy.D. "If you bide your time when someone is talking just to let them know what you think without acknowledging what they said or what you think about it, you may be difficult to get along with."

9. Breaking Plans On The Regular

There's nothing likable about a flake, so try not to make a habit of backing out of plans — especially at the last minute. "Someone who breaks plans at the last minute or is chronically late send the message 'you just aren't that important to me,'" Derichs says. "That can be very difficult to deal with in the long term."

Think about all the times you've tried to make plans with friends, but couldn't agree on a time. If you were the one who caved and agreed to meet later, I bet your friends really appreciated it. Of course, you don't always have to be the one to give in, but Odessky tells me this type of flexibility is super important when it comes to getting along.

11. Circling All The Attention Back To You

It's feels great to hold everyone's attention as you tell a story, but it's important to not go overboard with that spotlight. "If you constantly require all attention on you, you are difficult to get along with because you do not give other people a chance to shine," Odessky says. Let other people have their moment, too. I promise they'll love you for it.

We all want to be liked, but these little habits can stand in the way. Keep them in mind and you'll reap all the benefits of being easier to get along with.