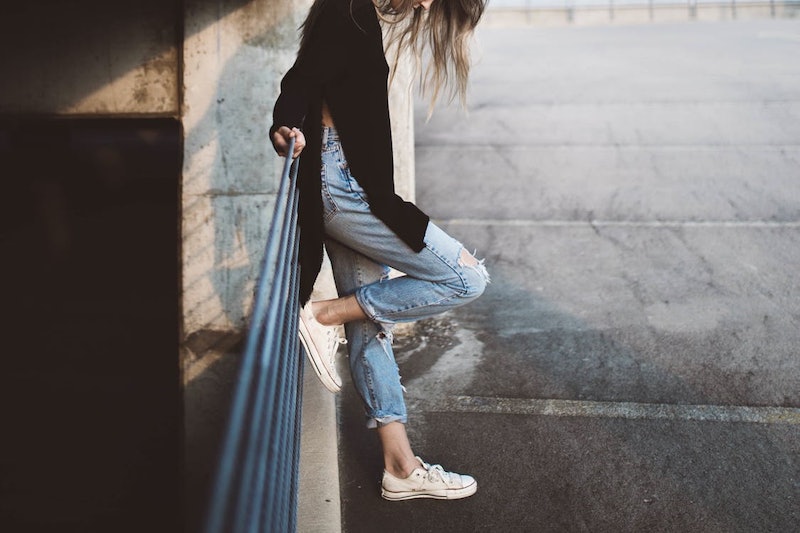 When struggling with a mental health issue it can be difficult to figure out what, exactly, is going on. While symptoms for things like anxiety and depression are often easy to recognize, this isn't the case for every disorder. Some are notoriously difficult to identify, like the signs of Borderline Personality Disorder (BPD). And it can make the process of getting a diagnosis incredibly frustrating.

This has a lot to do with the fact BPD was only officially recognized in 1980. Since it's newer on the scene, it doesn't have as much research and understanding as anxiety, depression, or even bipolar disorder. BPD also tends to mimic or coincide with other disorders. "In some cases, co-existing mental illnesses may have symptoms that overlap with BPD, making it difficult to distinguish BPD from other mental health illnesses," says licensed clinical professional counselor Julienne Derichs, LCPC. There is, however, a definition for BPD as well as info on what sets it apart from other issues.

As Derichs says, "Borderline personality disorder is a serious mental disorder manifested by a pattern of ongoing instability in moods, behavior, self-image, and functioning." These mood shifts happen much faster than the ones found in bipolar disorder, and the issues with self-esteem and functioning tend to be more pervasive and longer-lasting than those found in anxiety and depression. Sound familiar? Then read on for more ways to spot BPD.

If you have BPD, you might notice there's no middle ground when it comes to how you view friends, family, and partner. "Individuals who suffer with this have unstable interpersonal relationships. They see things as very black and white," psychologist Dr. Nikki Maritnez tells Bustle. As a result, you might fluctuate between loving your friends and hating them, all within the same day.

2. You Have Trouble Reading Emotions

If you have BPD, then you likely won't have much in the way of "emotional intelligence." As Derichs says, "Emotional intelligence is about observing emotions, both your own and those of the people around you, and then using this knowledge to guide your thinking and actions." Without it, you're likely to come off as "needy' or "rude."

3. You're All Sorts Of Impulsive

People with BPD are highly impulsive. As Derichs tells me, you might catch yourself doing risky things like abusing drugs, spending money you don't have, driving recklessly, or having lots of unsafe sex

BPD sufferers tend to lack of a sense of self. As a result, you might always feel "empty," constantly clinging to others for validation and self-esteem, or changing your life plans on a whim. (Switching careers, moving a lot, etc.) It can be a very lonely feeling, as well as one that causes a lot of problems.

5. You Don't Always Care About Your Personal Safety

Some people with BPD self harm or put themselves in risky situations, like that aforementioned reckless driving. As Derichs says, any recurring suicidal behaviors or threats can be a sign of the disorder. If you feel suicidal or like you "don't care" — even for a minute — talk with a doctor ASAP.

6. You've Cycled Through Many A Therapist

If you've been dealing with these symptoms for a while, you may have already popped on over to a therapist to figure out what the heck is going on in your life. And then maybe another therapist. And then another. As Martinez tells me, BPD patients are notorious for skipping out on appointments because they're therapist "offended" them or they don't want to put in the work. It can lead to a cycle of starting therapy and stopping, and constantly looking for someone else to talk to.

7. Your Mood Changes All The Time

Mood swings are often associated with bipolar disorder, but the peaks and valleys of bipolar disorder tend to last weeks or even months. BPD sufferers have mood swings, too, but Derichs tells me yours might change faster, like every few hours or days.

8. Your Relationships Are Always Intense

Think about your relationship history. Do you have intense but very unstable relationships with friends, family, and significant others? If so, this is thanks to the black and white thinking, Derichs tells me. When you're idolizing people one moment and hating them the next, it can lead to all sorts of relationship issues.

9. You Have Trouble Controlling Your Anger

Anger is a huge problem for those with BPD. Instead of just getting mad, you get mad. And it's always over something small, too. You blow things out or proportion, read into little "slights," and then have trouble reeling your emotions back in.

10. You Often Lose Touch With Reality

When super stressed, you might have a sort of "out of body" feeling known as dissociation. As Derichs says, it'll cause you to feel cut off from yourself or like you're observing things from outside your body. You might also feel paranoid and catch yourself saying or accusing people of all sorts of wild things.

11. You Have A Huge Fear Of Abandonment

BPD can cause you to feel clingy, and thus very afraid of real and imagined abandonment, Derichs tells me. You might think you see "signs" someone is going to leave or feel crushed and slighted by little things, like your partner not texting back immediately. It can be very exhausting for all involved.

BPD is a tough disorder to deal with, and even more difficult to diagnose and treat. There is hope, though. With treatments like talk therapy — and understanding friends and family — it is possible to feel better.