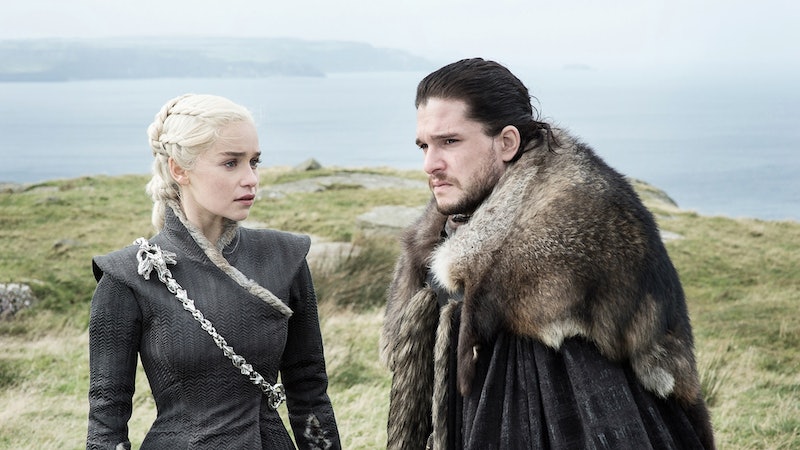 Fans have known the truth about Jon's parents for years now, but on Sunday's episode of Game of Thrones, the secret was revealed to the one person who it will affect most. Daenerys learned that Jon Snow is a Targaryen and her reaction proves that their romance is officially over. Jon (Kit Harington) broke the news to Dany (Emilia Clarke) near the end of the second episode of Season 8 and the reigning Queen of the North didn't seem to want to accept the fact that she and her new boyfriend are actually related. If anything, it seemed less about the whole incest thing and more about who would end up on the Iron Throne when this battle is over.

As Jon told her the story of Lyanna and Rhaegar's marriage — and admitted that he was actually Aegon Targaryen — Dany fired back that it was "impossible" and attempted to leave the crypt where the pair stood. And most importantly, she brought up the major issue that still hangs over the couple's heads: "If this is true, you would be the last male Targaryen heir," she told Jon, adding that this put him in line for the Iron Throne. Considering she told Sansa earlier in the episode that her only goal has ever been to be on the Iron Throne, it seems as if the honeymoon is officially over for these two.

As Sam (John Bradley) explained to Jon in the Season 8 premiere, Jon is not actually the bastard son of Ned Stark (Sean Bean), as he always thought. Instead, he was revealed to be the son of Ned's younger sister, Lyanna, and Dany's eldest brother, Rhaegar Targaryen. While that was a massive shock to Jon in and of itself — after all, the former King of the North always believed Ned to be an honorable and honest man — the even bigger twist was discovered by Gilly (Hannah Murray) back in Season 7.

While looking through books at the Citadel, Gilly found a record of a secret wedding ceremony between Lyanna and Rhaegar, who annulled his first marriage in order to run away with the Lady Stark. Because Jon's parents were married, that means that not only is he not a bastard, but as the heir Rhaegar Targaryen, he's technically higher in the line of succession than Dany. As Sam said, he's the true king of Westeros, despite bending the knee to his new love in order to earn her support in the fight against the White Walkers.

Sam also revealed that Jon's real name is Aegon Targaryen, which Bran saw Lyanna tell Ned in a vision where she asked him to protect her son. In other words: it's very clear that Jon is Dany's nephew, so even if he decides not to act on his claim to the Throne, their romance is effectively over.

Despite Jon's hesitation to accept the news that Sam shared with him — after all, he gave up being both the Lord Commander of the Night's Watch and the King of the North because he doesn't want to be a ruler — the fact that Jon has more claim to the throne than Dany means that they both will have to choose between love and power.

"Daenerys' lifelong dream has been to avenge her family and claim her rightful seat on the Iron Throne," Clarke told TV Guide back in January, predicting her character's reaction to the shocking news. "She truly loves Jon. Were she to find out about his title, it would cut deep." Add to that the fact that the North are already wary about being ruled by a foreign queen and it seems as if the battle for the Iron Throne might have just become even more fraught than the war against the White Walkers.

Dany might have an army and dragons on her side, but Jon was apparently born to sit on the Iron Throne; if these two can manage to find a way to rule together, Westeros should be in good hands, but it seems much more likely that these two Targaryens will have to fight it out to determine who, exactly, will rule the Seven Kingdoms when all the fighting is done.