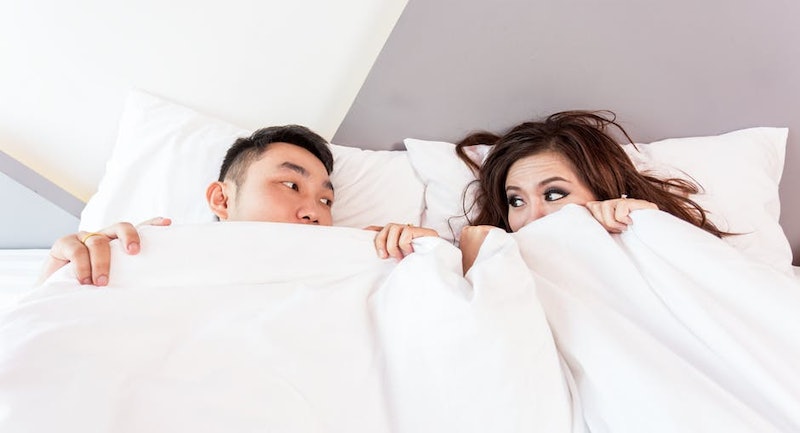 While you certainly don't want to read too much into your private life, it doesn't hurt to check in occasionally — especially since the way you and your partner have sex can reveal problems in your relationship. Do you enjoy yourselves? Do you feel comfortable enough to try new things? If not, it may mean you have similar issues going on in other areas of your relationship.

Of course, many other factors will be at play in a failing relationship. But your intimate moments together can reveal quite a lot. "Sex is a very ... vulnerable experience where you often let your guard down and are physically and emotionally connected to your partner," NYC-based therapist Kimberly Hershenson, LMSW tells Bustle. "If you can't be yourself or express your desires during sex, when you're at your most vulnerable, you likely aren't expressing yourself or your needs outside the bedroom." And that's one habit, among many, that can truly mean a relationship is on the rocks.

Apart from addressing any intimacy issues you might be having as a couple, recognizing a problem before it gets out of hand can help save your relationship. Read on for some symptoms to watch out for, as they may mean you two have some work to do.

1. You're The One Putting In All The Work

While it's cool you're making such an effort during sex, you certainly don't want to be the only one doing so. "If one person is always the giver in bed and the other is the taker, this may be playing out in the relationship as well," Hershenson says. Do you also make all the decisions while your SO sits idly by? And are you the one making all the plans to get together? If so, it may mean your partner has checked out. And that's not good.

2. You've Been Feeling Pain And Tension

If you're experiencing pain during sex, it could be due to your period, or the fact you aren't using enough lube. But it could also point to something a bit more. "Sexual pain is often psychogenic — caused by the mind in response to relationship strife," says Laurel Steinberg, PhD, New York-based sexologist and relationship therapist and professor of psychology at Columbia University. If you feel tense during sex, it could be your body's way of telling you something's wrong.

3. One Or Both Of You Has Checked Out

Sex can't be mind-blowing 100 percent of the time. But that doesn't mean you two should make a habit of checking out. As Steinberg says, "If there is a complete lack of creativity and 'checkedoutedness,' that is probably happening elsewhere as well." If you guys aren't paying attention to each other during the other moments of the day, it may be time to put in a little more effort.

4. You Feel The Need To Fake It

There's nothing wrong with occasionally playing up your pleasure in bed. But, once again, do not make a habit of it. "If one of you is faking it in bed it could be a sign of lack of trust and a breakdown in communication," Hershenson says. "You should feel comfortable to express your needs not only in bed but in all matters."

5. Your Partner Clearly Doesn't Care About Satisfying You

If your partner orgasms then passes out on the regular — without satisfying you — there could be several problems going on, Dr. Steve McGough, director of R&D at Women and Couples Wellness, LLC tells me. It might mean you have a selfish partner on your hands. Or, it could mean you don't feel comfortable enough in your relationship to speak up about your needs. And clearly, that's not good.

6. You're Never In The Mood

If you don't feel like having sex, that's fine. But do take note if you're suddenly never in the mood. "Low sex drive can happen for a number of reasons, including not being that into [your partner]," Steinberg says. This could just be a little dry spell you're going through, or it could be another underlying psychological response to larger issues in your relationship. Whatever the case may be, it's definitely time to talk to your partner and figure out that's going on.

7. You've Started To Avoid Having Sex

Your sex drive can wax and wane as you deal with life, tiredness, a busy schedule, etc. But that attraction should still be there. So, if you're avoiding having sex, it could mean there's more going on. "It can be that you have negative feelings related to your partner and this shuts down your desire," McGough says. "This could be caused by many, many different things ranging from just being annoyed to major issues such as infidelity, etc."

8. You Feel Too Embarrassed To Try Something New

If you've been mulling over some fantasy, but feel too shy to bring it up, it could be a sign of trust issues. "You should be able to speak up regarding your needs and if you feel you can't, that is a problem," Hershenson says. It could all be in your mind, however, so try asking your partner and see how they react. If they don't listen, or make you feel ashamed, then it may be time to reconsider your relationship.

9. You're Really Bad At Communicating Your Needs

Not all sex has to be slow and loving — especially if that's not your thing. But if you crave intimacy, and the love's just not there, it may mean things are falling apart outside the bedroom. "Sex without intimacy may be reflective that your relationship is also lacking in intimacy, not only physically but emotionally as well," Hershenson says.

11. You Can't Stop Thinking About Somebody Else

While it's normal to fantasize, it's not so normal to become completely focused on somebody else. "If a woman is consistently thinking about being with another partner, this could be an indicator of a problem," McGough says. "However, it also could just be healthy fantasy. In my opinion, relationships are best when they are honest and the partners can truly tell each other what they want and fantasize with the confidence that the other partner will accept and not judge them."

If you do these things for reach other, you two are likely in a healthy relationship. But if your sex life has become stale, uncomfortable, or painful, it could mean things are on the outs. Think that may be the case? If so, talking with your partner is the best place to start.

More like this
Bumble's "Compliments" Feature Lets You Message Before You Match
By Lexi Inks
Emily Ratajkowski & Pete Davidson's Astrological Compatibility, Revealed
By Nina Kahn
20 Thanksgiving Toast & Speech Ideas That Actually Aren’t Cheesy
By Brandi Neal and Mia Mercado
Are Sagittarius & Sagittarius A Good Match? Astrologers Weigh In
By Kristine Fellizar
Get Even More From Bustle — Sign Up For The Newsletter