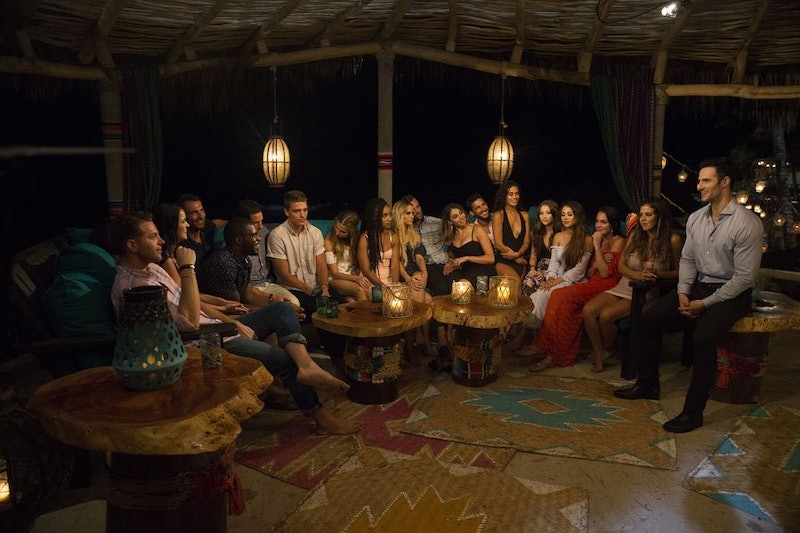 There's been a lot of talk about Bachelor in Paradise this season, especially after the production shutdown had people weighing in on the show before the season even began. (As a reminder, a producer raised concerns about alleged sexual misconduct between Corinne Olympios and DeMario Jackson during filming, and production was temporarily halted. But an investigation into the matter found no wrongdoing.) The shutdown seeped into almost every frame of the season, largely because ABC teased upcoming appearances from Corinne and DeMario for weeks, stretching out the topic. But aside from the shutdown and how it was handled, Bachelor in Paradise Season 4 has been frustrating to watch.

Instead of a fun, sunny, extracurricular activity for Bachelor Nation, it became a frustrating show where fan faves became villains and exhausting love triangles were everywhere. It almost felt like work to watch instead of a breezy interlude between The Bachelorette and The Bachelor — and the contestants are a huge part of that. What's been up with them this season, anyway?

Any part of this franchise will always have problematic elements (just as many shows do), but this season was a low point for Paradise, which always felt more casual by design. So, production shutdown drama aside, there are so many reasons why the cast of Bachelor in Paradise Season 4 has been disappointing, making for a frustrating viewing experience.

Who Are These People?

Usually the cast of Bachelor in Paradise is filled with some of the quirkiest, most memorable members of the cast from the year before, but this season's cast has been pretty light on interesting, different personalities. And, new additions like Blake and Fred found themselves leaving the show the same episode they came in on — so there wasn't really even time to get to know these suitors. As a result, there have been many forgettable contestants this season, and it's hard to even keep track of who any of them are. Jack Stone? Christen? Who knows.

Coming out of Season 13 of The Bachelorette, Dean had a broken heart, a tender side, and was a major fan favorite in the running for the next Bachelor. But after spending Paradise two-timing Kristina and Danielle, he's a lot less charming. Like, you probably wouldn't want to imagine him as your boyfriend now, right? And that's just sad. It isn't really the show's fault that Dean acted the way he did, but he's kind of ruining the viewing experience.

Every year there are a good number of double crosses and love triangles on Bachelor in Paradise, but there are usually enough strong couples to root for that the fling drama is entertaining to watch. But, the same can't be said for this season in which even the strong couples don't feel like they could go the distance. Amanda doesn't really even seem to like Robby, and Taylor and Derek pretty much only get shown when they're fighting. Which leads me to...

Where Are Taylor & Derek?

The show does have a strong couple (who is now reportedly engaged), but yet they can hardly be found on the show. Sure, if there was real drama to get to I could see how Derek and Taylor's love could fall by the wayside. But if you're gonna show fans Christen eating plates and plates of scallops instead of the sweet date Derek claims he planned, I just don't get it.

After what happened between Amanda Stanton and Josh Murray in the past year, Amanda deserved a redemptive love story, so why is her new relationship with Robby so dull? With the twins claiming Robby cheated on Amanda in the finale (he denied it), it seems Amanda will once again end Paradise with a broken heart.

Ben Z. Is Only Loved By His Dog

With someone like Ben Z. available for dates, I have no idea why so many people fought over Tickle Monster and Daniel. Ben Z. (and his dog) deserved better.

Daniel's Jokes Have Got To Stop

We get it, Daniel: You're Canadian. But while there's nothing wrong with a few (more like a few dozen) "Canadian bacon" references — making jokes about building a wall and undocumented immigrants is just tasteless. Paradise isn't really the time for political satire. Add to that his Caitlyn Jenner joke and the way he treats women and Daniel just needs to go — not get more screen time.

Jaimi's Sexuality Is Not A Joke

Yes, bisexual people can be attracted to men and women. But the contestants making it seem like Jaimi and Christen were going to hook up when they're obviously just friends, and the idea that because Christen is a virgin that it was strange to see her going off with Jaimi, is totally not cool. Their fellow contestants shouldn't have speculated about them the way they did.

Emily and Haley Ferguson have entertained audiences by competing jointly on The Bachelor and Bachelor in Paradise, often identified only by their twindom. But in their second appearance on BiP this season, when their chosen guys were taken, they turned into a pair of mean girls, insulting D. Lo and Taylor's appearances. They had the good sense to apologize on Twitter, but the damage was done — and their behavior left a poor taste in everyone's mouths.

What is the big deal with Christen loving scallops? Sometimes getting a look at the experiences the cast has when the cameras aren't rolling or hearing about weird things they love can be fun, but this "scandal" just made most of the BiP cast seem like a bunch of immature, shellfish-hating bullies. And, you know, maybe a bag of scallops isn't the perfect late-night club food — but she's doing her, and who cares?

What's Up With These Rose Ceremonies?

The rose ceremony is the centerpiece of any Bachelor franchise show, but on Paradise, they've been out of control. There are cast members quitting out of the blue in the middle of episodes. There are episodes that start with a rose ceremony or have one stretch out over the course of two episodes. A return to the one episode/one rose ceremony format would be welcome for next season. Sometimes with all the drama an episode is dishing, having a familiar format helps anchor the show.

Overall, this season of Bachelor in Paradise has been a bit of a disappointment — and that's even before you consider anything to do with the shutdown. At this point, it's probably for the best that the season is drawing to a close. Here's hoping next year the cast handles things differently.