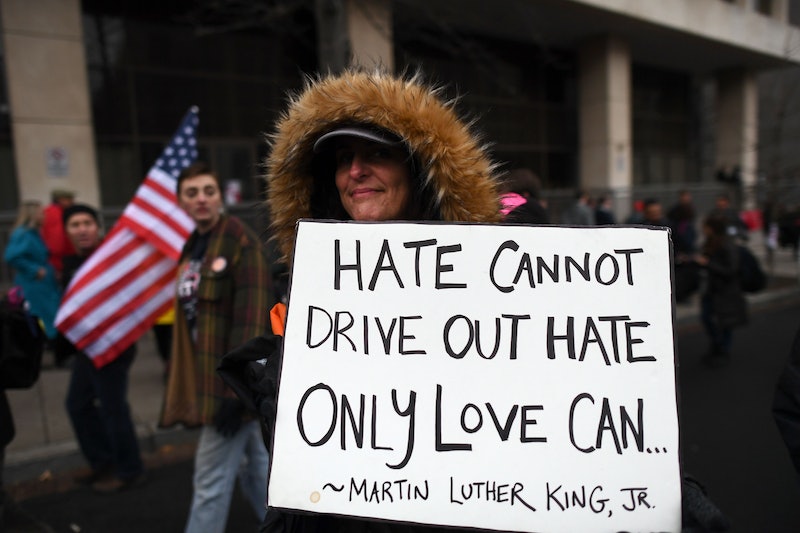 With hundreds of thousands of women planning to take to the streets Jan. 21 for the Women's March on Washington (and more than 600 sister marches planned around the world), you may want to draw some inspiration from your favorite feminists. Using feminist quotes on your Women's March signs is a great way to show your solidarity for everyone's rights. Millions of people have come before us to fight for our basic human rights, so I've compiled 12 feminist quotes to fuel your inspiration.

In 2017, things like equal pay for equal work, protection of our reproductive rights, paid parental leave, immigrant rights, disability rights, LGBTQ rights, and anti-discrimination protections for every race and religion should be a given. The newly-inaugurated president and administration threaten these rights in a terrifying way — and because of that, it's more important now than ever before for us to band together, support each other, and fight for those rights together.

Quotes from people like Hillary Clinton, Gloria Steinem, Maya Angelou, Michelle Obama, Malala Yousafzai, Beyoncé, and Desmond Tutu, can offer us guidance as we continue to fight for our collective future. Check out these 12 quotes about feminism to inspire you for the upcoming Women's March. Use them on your signs, or just keep them in your head for support.

1. "The most common way people give up their power is by thinking they don't have any."

2. "The future depends entirely on what each of us does every day; a movement is only people moving."

3. "If you are neutral in situations of injustice, you have chosen the side of the oppressor."

4. "We cannot all succeed when half of us are held back."

9. "I believe that telling our stories, first to ourselves and then to one another and the world, is a revolutionary act."

10. “No country can ever truly flourish if it stifles the potential of its women and deprives itself of the contributions of half its citizens.”

11. "I am deliberate and afraid of nothing."