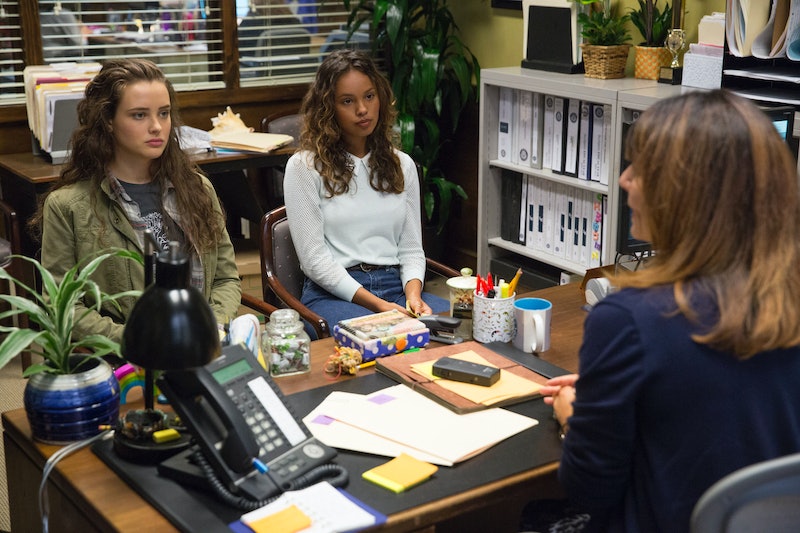 "The tapes were just the beginning," so says the trailer for 13 Reasons Why Season 2. It's also what the Netflix show's creator Brian Yorkey is saying in a new interview, in which he revealed there won't be another suicide this season, but Hannah will still be integral to this new story, which is taking things beyond Jay Asher's book of the same name. In Season 2, 13 Reasons Why is tackling sexual assault, which Yorkey knows is a heavy yet timely topic in the age of #MeToo. It's why the creator is making sure the show's treating the topic with the utmost respect.

In an interview with The Hollywood Reporter, Yorkey said that when 13 Reasons Why returns on May 18, it will be less graphic than last season. In fact, each episode will start with a new intro that will have the stars of the show issue a warning telling viewers how to get help if they need it. But it will not back down from addressing tough topics like sexual assault. This season will explore how Jessica comes to terms with being sexually assaulted by Bryce.

"I once read something online where someone said, 'Well, Jessica told her dad she was raped, so her story is over,'" Yorkey told THR. "I remember thinking that right there is reason enough to do a season two, because her story is just beginning — her experience continues to be a central part of season two."

While every character is dealing with the fallout from the tapes, Yorkey wanted to put special focus on Jessica and Hannah's sexual assaults, both at the hands of Bryce. Ultimately, the first season shows that the assault had a major impact on Hannah's life, and now it's important to see how Jessica recovers from what happened.

Yorkey wasn't expecting how timely that story would feel, though. He had finalized the Season 2 story before last year's Harvey Weinstein allegation bombshell, which resulted in more than 80 women accusing him of sexual harassment or assault. (In a statement to the New Yorker, a spokesperson for Weinstein denied all allegations of non-consensual sex.) It also became timely in another unexpected way, in that author Asher was accused of sexual harassment earlier this year. (In a previous statement to Bustle, a spokesperson for Asher denied the allegations.)

Back in December, the show's producer and cast noted that the new season of 13 Reasons Why and the Weinstein scandal have a lot in common. This season is specifically look at serialized sexual assault. "I understood that scary systemic rape culture in Hollywood," executive producer Joy Gorman said at Teen Vogue's LA Summit, before explaining how the high school in 13 Reasons is similar to the film industry.

"Liberty High School, like every high school and every college campus, is capable of having that same kind of systemic rape culture," she said. "We have Bryce Walker, Hollywood had Harvey."

Yorkey wanted to continue Jessica's story to show how to "go from being a victim of sexual assault to being a survivor of sex assault." But it will also take a look at sexual assault within Liberty High School's sports program. All of which will come to light through Polaroids, which were teased in the trailer.

"We look at the ways that sexual assault has been perpetrated over a number of years and has been in fact documented," Yorkey said. "And also the ways in which the institutions — the athletic department, the high school itself — are in some ways complicit in letting that happen."

The new season will likely be as emotional as the first time around. It will also be timely. The show is tackling sexual assault at a time when women and men of all ages need to be having a conversation on consent. Hopefully, 13 Reasons Why will help push that conversation forward.