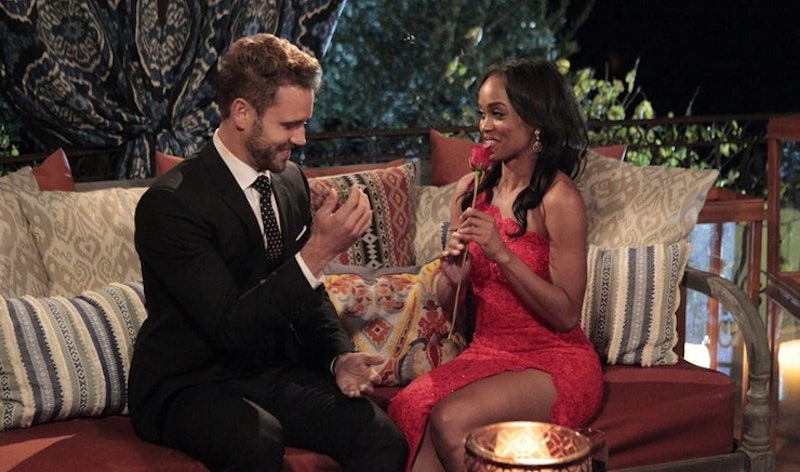 Now that she's been eliminated from The Bachelor (as we already knew for lit'ral weeks), it's finally time to talk about what to expect from Rachel Lindsay's season of The Bachelorette. I regret to inform you that I've been unsuccessful in my attempts to infiltrate the audition process or to propose to Rachel myself after Nick Viall was foolish enough to let her get away, but luckily, we have a whole season's worth of footage to draw from for these predictions. I'm referring to The Bachelor, of course, where Rachel outlasted 27 other woman in vying for Nick's heart, only to be sent home in the second-to-last episode, right after Fantasy Suites.

But before that, I had plenty of quality time with Rachel, both one-on-one in her interviews and opportunities to observe her in groups, so I feel like I have a pretty good feel for who and how she is, and how that will all play out once she's at the helm of her very own love ship. (This metaphor works, please don't worry about it.) Rachel's season of The Bachelorette is far from airing, and as far as I know, it hasn't even started filming yet, but here are the 13 things we're most likely to see when it premieres in all its glory.

Part of why Rachel went on The Bachelor in the first place is because she said she let her career as a civil defense litigation attorney — so legit — dictate her life, and neglected to leave time and space to find a partner. For that reason, I'm betting she'll have a whole host of men who are similarly stable in their career lives, and looking for that added bonus of a significant other. So sorry, but "Aspiring Dolphin Trainers" need not apply. (No offense to Alexis.)

At 31 to his 36, Rachel was closer in age to Nick than most of the other contestants on her season, and I think it benefited Rachel's interactions with Nick. She's also mature beyond her years, so I don't think we'll be seeing any of the decade-plus age gaps that have been so rampant on Nick's season. I predict most guys will fall in the early-to-mid-30s range, with a few scattered in the late 20s and late 30s. Maybe one or two in their early 40s, if things get really crazy.

Rachel has never been one to mess around, so I have a feeling we'll see her get engaged at the end of all this. She seems to both believe in the process and take it seriously, which bodes well for a finale proposal.

As the first black Bachelorette, there is already an incredible amount of emphasis being placed on her race and the race of whoever she chooses, but Rachel says she's coming into this process without any preconceptions about the man she ends up with. She told The Hollywood Reporter, "It’s my journey in finding love. And whether that person is black, white, red, whatever — it’s my journey." It sounds like she's putting very few restrictions on herself and trying to come in open-minded, and I'd expect the field of competitors to reflect that.

5. An Emphasis On Faith

Rachel made sure to bring Nick to her church when he visited her hometown of Dallas, Texas, so it's clear that her faith is an important element of her life that she wanted Nick to understand. It's also an important element in a relationship for two people to be on the same page, so look for conversations between Rachel and her suitors about what faith means to them and how their beliefs might intersect.

6. An Emphasis On Race

As much as I wish this could just be a regular season, with Rachel treated like the regular Bachelorette that she is, it's not going to be. Bachelor producers put off naming a black Bachelor or Bachelorette for so long that now there's an immense amount of pressure and scrutiny going into this first foray, so I imagine race will come up a lot, just as it did during Rachel's Hometown date with Nick.

Is it just me, or did anyone else completely fall in love with Rachel's family, particularly her mom during that Hometown visit? She was taking no BS, and was sharp as a tack, not letting a single thing sneak by her, so producers would be nuts not to bring her back as much as possible.

8. A Lot Of References To Her Dad

As we've been reminded umpteen times, Rachel's father Sam Lindsay is a federal judge, which means he is literally not allowed to appear on camera, as Chris Harrison shared in a post-show blog post. For that reason, he met with Nick off-camera, which is likely what we could expect from any of the gents who make it to the end with Rachel.

Rachel and Nick left things in a really amicable place, so I wouldn't be surprised to see him show up to offer some friendly advice and platonic hugs, à la Andi Dorfman knocking at Nick's door for a pre-rose ceremony pep talk. I think any interactions between Nick and Rachel going forward can only make the two of them look more positive and easygoing, so it would be smart for both to take advantage of that.

10. Former Bachelorettes In The House

This one is a gimme, because it's a format the show has followed pretty much every season, but if a group like Kaitlyn Bristowe, Ashley Hebert, and Desiree Siegfried doesn't show up to give Rachel advice, I will eat my hat. (And I don't even have a hat. That's how confident I am that this is going down.)

If there's one thing you could always rely on Rachel for this season, it was spitting the truth with Nick. She never sugarcoated anything and always spoke her mind, even if it was to say that she was considering walking off the show, so I would expect to see her treat the men on her season with that same respect, empathy, and compassion. She really doesn't strike me as the type to fake feelings that she doesn't have, or to be anything but honest if things aren't feeling right.

Something that really seemed to traumatize the women this season was Nick's abandonment of the typical structure of the series. It seemed like any one-on-one conversation was an opportunity to be sent home, so the ladies were always on-edge and fearful that they'd be next. For that reason, my hunch is that she moves back to the more standard set-up of eliminating men at a rose ceremony — instead of whenever the mood strikes her, Nick Viall-style.

No matter where she was or what she's doing, Rachel always seems to find a way to make it fun and interesting, whether it's vacuuming her living room or dancing down the street in New Orleans. She brought an incredibly refreshing energy and enthusiasm to the process in The Bachelor, and my guess is she'll do the same thing for The Bachelorette.

So there you have it — those are my best guesses for what's coming our way next season. And regardless of whether every single one of them comes true, I know it's going to be an exciting, compelling ride, and that Rachel deserves every moment of it.