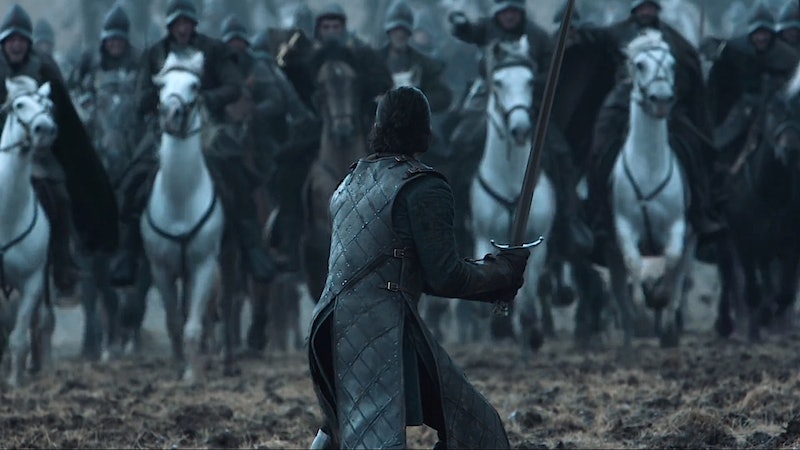 The dark days of winter are almost over, and sweet summer children everywhere will be able to tune into the Game of Thrones Season 7 premiere on July 16. Granted, July is still months away, but look at it this way, that just gives you more time to rewatch key Game of Thrones episodes. It's not the same as feasting on new episodes, but revisiting the most important moments from the show so far is a great way to prepare for the final two seasons.

Whether you need to brush up on your Azor Ahai theories, or want to refresh your memory when it comes to the various reasons the Starks and Lannisters are so adversarial, there is no bad reason to watch Game of Thrones. Rewatching the entire series is a big commitment though. If you aren't up to reliving six seasons worth of backstabbing, bloody battles, and beloved characters dying, then there is no shame in going straight for the highlights. With the final two seasons kicking off in July, it's time to focus on the stories destined to have the most impact on the series' endgame.

Here are the 14 Game of Thrones episodes you need to revisit immediately. Pop some popcorn and grab some tissues, because this is going to be an emotional ride.

The pilot introduces the White Walkers, offers up background on Lyanna Stark, and kicks off the major feud between the Starks and the Lannisters when Jaime tosses Bran out of a window. Go back to the beginning and prepare to be impressed by how essential this episode still is.

Let Ned's death serve as a reminder than anything can and will happen on this show.

Daenerys being reborn in the fire is one of the show's most pivotal moments. The hour also sets Jon, Tyrion, and Bran's overarching stories into motion.

Watch as the Tyrells form an alliance with the Lannisters, and Tyrion leads an army. This King's Landing-centric outing is full of strategic moves with long-lasting repercussions for all involved.

Two important things happen in the Season 2 finale — Arya receives the coin from Jaqen H'ghar, and Jon kills one of the Night's Watch. For these two Stark siblings, these moments lead them to allying themselves with groups they will ultimately turn their backs on in the name of family.

The bear pit scene remains one of the show's all time great moments, but more than that, this episodes solidifies Jamie's redemption arc, establishes the bond between him and Brienne, and still finds time to prove Ramsay is a monster.

7. "The Rains Of Castamere"

No one wants to revisit the Red Wedding, but it is such an important part of the story, it is worth another viewing — if you think you can handle watching Robb, Catelyn, and Talisa die twice.

The latest Season 7 tease features Brienne's sword, Oathkeeper, prominently. This is the episode where Jaime gives her the sword — forged from Ice — and sends her on a quest to find Sansa. Additionally, the hour also includes the story of how white walkers are made by the Night's King, and Daenerys' taking of Meereen.

9. "The Mountain And The Viper"

Here you have Tyrion's failed trial by combat, and Jorah being exiled by Daenerys. Basically, it's an episode devoted to evoking all of your emotions.

Melisandre uses her blood magic by burning poor Shireen, and sets up her future banishment by Jon in the process. There's also plenty of amazing action between Daenerys, Jorah, and Tyrion back in Meereen.

A newly reborn Jon leaves the Night's Watch, Bran has a vision of The Tower of Joy, and the High Sparrow's grip on King's Landing grows stronger.

Hold. The. Door. This heartbreaking outing illustrates just how powerful — and potentially dangerous — Bran can be.

The re-taking of Winterfell by the Starks will never stop being must-see TV.

Cersei's reign begins, Jon's parentage is revealed, and Daenerys sails for Westeros — the Season 6 finale is the last big move before the final game begins.

Rewatch these episodes now, because summer is coming, guys.