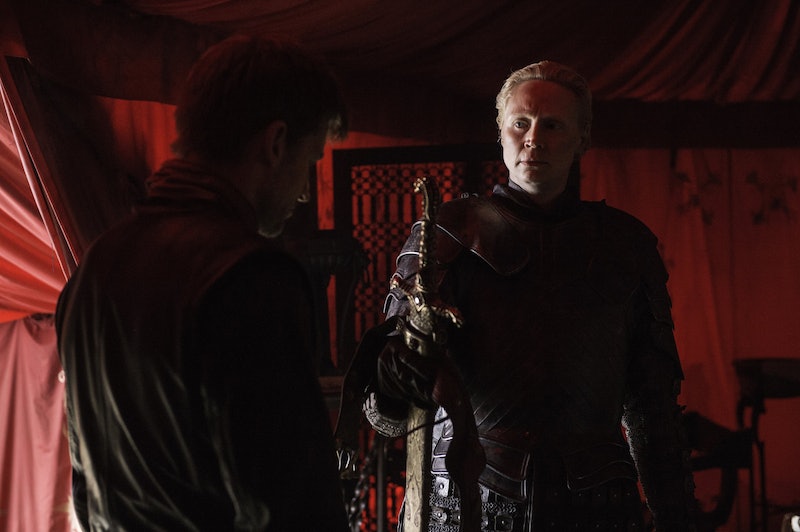 The night is dark and not at all full of Game of Thrones spoilers, which is frustrating since in the days before winter came to Westeros, there would have been a full-length trailer by now. Still, there's a tiny nugget of news in the form of a Game of Thrones Season 7 production video that surfaced on Twitter. It's just 15 seconds long, and there's no dialogue, but it may hold a major clue.

In the video, a mysterious hand is holding Oathkeeper, the sword Jaime gifted Brienne of Tarth when she went on her mission to save Sansa Stark. Remember, Oathkeeper is one of two Valyrian steel swords forged from Ned Stark's greatsword, Ice, and one of just a handful of Valyrian steel swords left in Westeros. Now, I would prefer not to think about what may or may not have happened to Brienne for her sword to end up in someone else's hands, and instead focus on why this in production teaser focuses all of its attention on Oathkeeper.

One look at Reddit reveals fans have long suspected Oathkeeper is Lightbringer, the legendary sword belonging to Azor Ahai. According to the prophecy, Azor Ahai reborn will draw the sword from the flames, signifying his return to save the realm from eternal darkness. The two key candidates for fulfilling said prophecy? Jon Snow and Daenerys, because, yes, Azor Ahai reborn may end up being a woman.

Now, since this is an in production video, the hand holding the sword does not necessarily belong to a cast member. If it is part of a future production special, it could be a props guy. It is definitely not the hand of Jon, Daenerys, or Brienne. In fact, the only current cast member whose hand it remotely resembles is Ser Davos', but since the hand in question has all of its finger joints intact, that counts the Onion Knight out too.

What's more important is the focus on the sword, and what it could mean for Season 7. With Jon and Daenerys destined to finally meet this season, and Brienne having joined team Jon for the foreseeable future, there will be plenty of opportunities for either character to get their hands on Oathkeeper. If it truly possesses any power, then either one of them could cause the blade to flame — finally answering the question of who is Azor Ahai reborn, once and for all.

Well, it would be definitive unless Game of Thrones has one more twist in store.

If Ice truly was the literal Lightbringer, then Oathkeeper is only half of the legendary sword. The other half, Widow's Wail, was gifted to Joffrey, and has not been seen on the show since his burial. By rights, Widow's Wail should have been passed to Tommen, but he wasn't big on swordplay, making it unclear if he ever possessed the sword.

Now, here's where things get interesting. Let's run with the idea of Lightbringer being in two parts. Could the show be planning on dropping a major surprise on fans by revealing both Jon and Daenerys together — one reborn in fire, the other in ice — are Azor Ahai? Prophecies are rarely ever literal, and if there are two swords, there could be two sword-wielders.

After all, Azor Ahai forged the sword by plunging the blade into his wife, Nissa Nissa's heart, and it was her soul combining with the blade that infused it with power. Maybe the lovers must be reunited in order for the prophecy to truly come to pass. If so, Jon and Daenerys are the most likely candidates.

No matter how all this plays out, Season 7 is shaping up to be a major year for Jon, Daenerys, and Oathkeeper. I, for one, cannot wait to see what happens next.