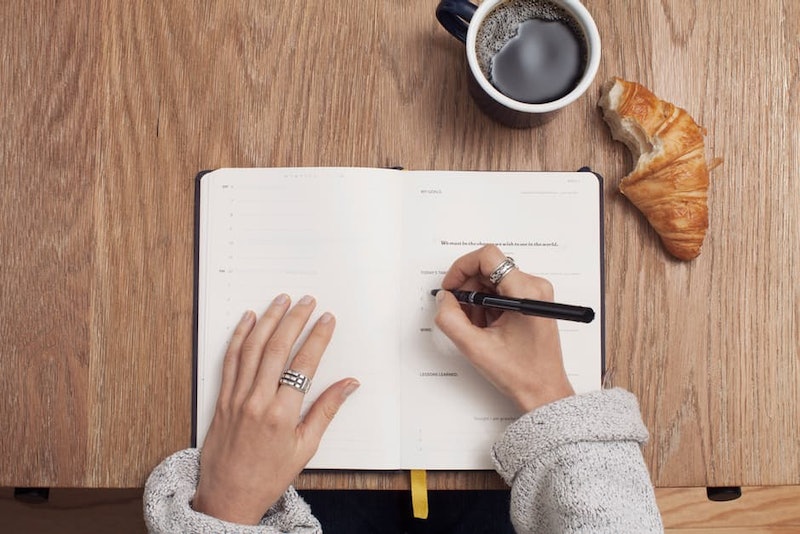 If you've ever looked down at your notebooks full of chicken scratch and wondered why you're writing is so darn sloppy, you'll probably be pretty interested to learn that your handwriting can reveal a lot about your personality. Yes, sadly, those sloppy notes mean something. And no, it's not always the most flattering information.

In fact, doctors and other professionals analyze handwriting all the time — because it really can be that revealing. "We call a handwriting sample a 'brain print,' because it's like a snapshot of the writer's current mindset, thought processes, and unique personality quirks," handwriting analyst Sherri LaReaux tells Bustle. "As no two people are exactly the same, no two fingerprints, or handwriting samples, are exactly alike either."

For that reason, your handwriting habits can be a fun way to reveal a little somethin' about yourself. But they can also be used more seriously in mental health settings. As triple board certified physician Dr. Darius Russin says, "For most people, it is a good litmus test. Your eyes aren't the only windows into the soul. Handwriting says a lot about you."

Of course, you shouldn't diagnosis yourself based on a handwriting sample. But it can help put you on the track to learning a little more about your mind. Read on for several handwriting habits that can reveal a lot about your personality, inner turmoils, and strengths.

Take a look at your notes, your to-do list, or your journal. Does your writing slant up as the sentence graduates? As Russin tells me, this could represent high levels of ambition. "But be careful," he says. "This could also be [a] sign of arrogance." Yikes.

If you have a tendency to write microscopically, it might mean you're able to concentrate on the smaller things in life, professional intuitive Davida Rappaport tells me. It could also mean you're detailed oriented, as well as a highly introspective person. Pretty cool, right?

Take a peek at how you write the letters "e," "g," and "a." Do you leave them slightly open at the top? As Russin says, "People who don't close off letters properly ... are really careless about finishing a job well. It could be that they're lazy, happy go lucky individuals, or [that they have] a deeper reason like depression."

4. Words That Are Too Close Together

Words that are crammed onto a page and written too closely together often point to a rushed mental state. "These people are neurotic for some reason," Russin says. If this sounds familiar, it may be a good idea to check in with yourself and see how you're feeling.

5. Writing That Flows On The Page

Does your handwriting just look... nice? If it seems to flow calmly and beautifully from your pen, you're likely a calm and relaxed individual, LaReaux tells me. How nice.

6. Hearts Or Circles Above Your "I"

Do you have a tendency to dot your "i" or "j" with a heart or a perfect circle? If so, it may be that you like attention. If it's become a habit you just can't break, however, it may be turning into a symptom of OCD, Russin tells me. Something to look into, for sure.

7. Writing That Scatters Across The Page

While some people neatly write within the lines, you scatter your writing all over the page. As Russin tells me, this might mean you're talkative and excitable, and that you make a great friend. But it can also be a sign of ADHD — especially if what you're writing doesn't make any sense.

Do you have beautiful, loopy, curly handwriting? If so, you're likely a sympathetic, emotional, and intuitive person, Rappaport tells me. You focus on your emotions, and it shows in the attention to you pay to your handwriting.

If your letters have sharp angles, it could be revealing some inner turmoil. "Angular formation of letters deal with mental energy and in some cases anger," Rappaport says. "Some people may have anger management issues or may be rigid or inflexible if this is excessive." So take note

10. Writing That Is Too Neat And/Or Centered

When taking notes, do you indent your writing with computer-like precision? If so, it might mean you're a little too uptight. You probably strive for perfect grades and worry about everything, Russin tells me. It might also mean you're more likely to give into peer pressure.

11. Capital Letters That Are Huge

If you write your name with a huge capital letter, you might secretly wish you were famous — or at least somewhat recognized. "These are the people you see as bosses at work, CEOs, music celebrities, and movie stars," Russin says. "The bigger the letters or signature overall, the more that person enjoys being noticed." So interesting.

12. Writing That Begins Towards The Top Of The Page

If you start writing on notes or birthday cards at the tippy top of the page, it can point to your ability to plan and organize, Russin tells me. Which makes sense, doesn't it? Those of us who aren't great planners often start further down, and almost always run out of room.

13. Handwriting That Is Suddenly Sloppy

Did you used to have OK handwriting, but now it's a complete and utter mess? This can point to a developing mental illness, Russin tells me, so be careful. "Have you felt depressed lately or mentally not there, or is it your physical body abilities no longer feel right?" If so, it may be one of the many signs it's time to talk to a therapist.

Sloppy handwriting can also reveal a tendency towards carelessness, impatience, and absentmindedness, Rappoport tells me. Or, it could just mean you were in a hurry.

While an opening at the top of your letters might mean you're lazy, an opening at the bottom can be a sign that you struggle with honesty. "You never want to see someone’s 'a's' and/or 'o’s' open on the bottom," Rappaport says. It's an indicator of dishonesty, as well as a tendency to be misleading.

Handwriting traits like these can be mighty revealing, but it's important to consider other factors as well. Just because you draw little hearts doesn't mean you have OCD, for example. But it may be a revealing quirk that's definitely worth looking into.

More like this
The Spiritual Meaning Of Angel Number 000, Explained
By Kristine Fellizar
This Psychological Effect Might Be Keeping You From Hitting Your Goals
By Lexi Inks
10 Stranger Things-Inspired Halloween Costumes For True Fans
By Emma Carey
Bobby Berk Explains How To Maximize Every Inch Of Your Bedroom Storage
By Marilyn La Jeunesse
Get Even More From Bustle — Sign Up For The Newsletter