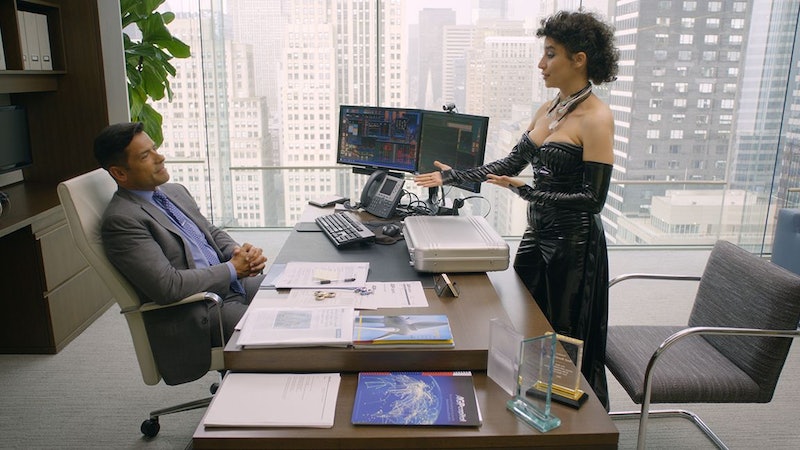 Spoilers ahead for Broad City Season 5, Episode 3. In the Feb. 7 episode, Broad City parodies The Matrix when Ilana gets a brand new outfit befitting her sudden bitcoin wealth. Clad in head-to-toe black leather, she stomps the New York streets, simultaneously channeling Carrie-Anne Moss' Trinity and Keanu Reeves' Neo. It's a classic Broad City tribute: Abbi Jacobson and Ilana Glazer have honored movies, TV shows, and music throughout the show's five-year run, so it's only fitting that Ilana goes big for in this final season episode.

Much of "Bitcoin & The Missing Girl" is about old character callbacks. Ilana's mom (Susie Essman), Nicole (Nicole Drespel), Trey (Paul W. Downs), and Gemma (D'Arcy Carden) all pop up in the episode for perhaps the last time in the history of Broad City. Plus, Mark Consuelos makes his debut as Ilana's ex-lover — a cheeky nod to the time his real-life wife Kelly Ripa guest-starred as a dysfunctional version of herself in Season 2. But the episode also does something the series loves to do: spoof pop culture. Abbi and Ilana have always sprinkled the series with entertainment references, so in honor of Ilana's Matrix moment, here's a look back at some of their best parodies.