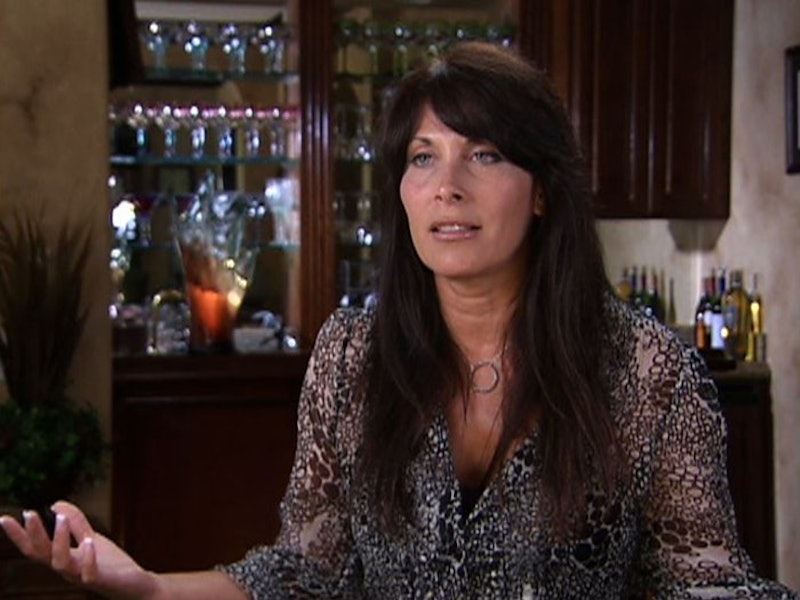 As of this moment, there have been 100 Real Housewives cast members over the years. Unfortunately, they don't all last on the show. Some left for personal reasons and others unceremoniously got the boot. With that said, there are probably a lot of Real Housewives that you forgot about.

In all honesty, some of them just shouldn't have been cast. They were too boring, too nice, too scared of conflict, or some other characteristics that don't add up the ideal Housewife. Then there are other ladies who some fans might personally miss, but who just haven't been on television in so long that a lot of people would not remember that they were ever around. Plus, social media wasn't as prominent when the franchise began, so some of these women just fell of the map because they didn't have huge followings outisde of the show. There are a few former Housewives who do whatever they can to cling on to the Real Housewives franchise and fans still don't notice. Then there are others who have completely moved on and have never looked back.

No matter what the situation is, once a Housewife, always a Housewife. And just in case you can't remember all 100 women who have been cast for these shows, you don't have to wait for the reruns to air because this list has all of the reminders you need. Do you remember these ladies or are you scratching your head at the the mere mention of their names?

(For the record, this list does not even mention anyone from D.C. or Miami as an individual just because true fans of the franchise decidedly forgot about both of those shows and moved on completely.)

Kimberly Bryant was a part of the franchise from the very beginning and she was actually the first Housewife to leave the show. The former OC Housewife's story lines included getting breast implants and her battle against skin cancer before she moved away from the sunshine state and finished her reality TV career for good.

If you can't remember who Cindy Barshop is maybe this will help: She is in the hair removal business. Other than that, Cindy was a Bethenny Frankel replacement, who was just too much of a normal person to take on that task. Well, obviously since Bethenny returned to RHONY and Cindy only lasted for one season.

If DeShawn Snow was on Real Housewives of Atlanta for any season other than the first one, it would be even easier to forget about her. DeShawn was the wife of an NBA player, who aspired to raise $1 million... in one night... at a party in her own home. That was her only story line and she was just too sweet to survive on the show.

Amber Marchese was most noticeable for defending her obnoxious husband, Jim Marchese, who picked fights (and still does) with pretty much every cast member. It was more like he was a Housewife that season and Amber was a side attraction.

I figured that a Wiccan whose story lines included building a secret sex room in her home and possibly casting spells on her costars would be an interesting and long-lasting cast member, but that was somehow not the case. Pretty much no one ever acknowledges that Carlton Gebbia was a cast member on Real Housewives of Beverly Hills and that's probably for the best.

Other than constantly discussing her desire to get engaged and throwing lackluster events, Katie Rost didn't bring much to Real Housewives of Potomac. It wasn't really a shock that she's the only original star who didn't get cast for Season 2.

Jo de la Rosa was a great cast member on RHOC, but it really made no sense for her to be there. She was in her twenties, which made her significantly younger than the other cast members, and she had no genuine relationships with the woman until the show started filming.

Kristen Taekman just wasn't made for the Housewife life. She was too normal and afraid of conflict to survive in the RHONY social circle. Other than creating her nail polish line and getting Ramona's hair wet, she didn't bring much to the table.

Even though you might not recall her time as a Housewife, it's important to give credit where credit is due. Lisa Wu was on that Real Housewives grind before it was even a thing. She was trying to start a fashion life and turn her name into a brand during Season 1 of RHOA before it became a #TotalHousewifeMove. Unfortunately, no one really knew who she was and she was trying to ball out during the early Housewives era before the ladies became bonafide celebrities.

These to had to be paired together, otherwise, you still might not know who they are. Surprisingly, twins being cast on RHONJ did not lead to double the drama. Other than occasionally saying the same words in unison they gave fans nothing aside from the "clink clink" moment — and do fans even know which twin said it?

If Joyce Giraud de Ohoven had a story line that was half as amazing as her hair, she would have been the best cast member on RHOBH. She may have the most superior hair in the franchise, but her role as a Housewife, not so much. Other than Brandi Glanville rudely calling her "Jacqueline," Joyce wasn't part of much drama during the series. She was just too nice.

Jules Wainstein had no story line during her one season on the show, but after it ended things took a turn in her personal life. Unfortunately, for Jules this was just another case of being too nice for the Housewife life.

Yes, Claudia Jordan was actually a cast member on RHOA. Blink and you missed it. She was brought on as a friend of Kenya Moore, which didn't sit too well with the rest of the cast. Her shade game was weak. She didn't share a love life on the show. She was just there. And that is all.

I was actually excited for Kathryn Edwards to be on RHOBH since her one season aired during the resurgence of interest in the O.J. Simpson trial and she was mentioned in RHOBH friend Faye Resnick's infamous book. But other than sucking up to Lisa Vanderpump and telling her that Erika Girardi referred to her as a "sniper from the side" and having a super hot husband, Kathryn didn't provide fans with too much to work with. And that's why she was never mentioned ever again.

Was Tammy Knickerbocker an insignificant Housewife or did she just appear way too early on to be memorable? Let's go with the latter. Tammy had two rebellious daughters and a son with a man she wasn't dating, so she had some potential, but she was just before her time. Well, that and the fact that she had very little drama with the other women.

I have no idea why Kim Fields joined Real Housewives of Atlanta, but she really shouldn't have. A legitimate actor with no financial issues and zero desire for drama was far from the ideal fit for the franchise. It didn't even look like she was going to make it to the end of her one season, so it is not at all surprising that she didn't return for a second one.

There have been plenty of casting mistakes on Real Housewives over the years, and Quinn Fry on Real Housewives of Orange County was definitely one of them. Do you remember Quinn? Probably not. She wore wigs sometimes and dated younger guys, but in the most boring way possible.

Lynne went in for mother/daughter plastic surgery, tried to sell leather wrist cuffs, and did her best to discipline her super rebellious teens. Nevertheless, she just got lost in the shuffle on a show with a constantly changing cast. Bring. Lynne. Back. #JusticeForLynne

Unfortunately for her, it's tough to distinguish Peggy Tanous among the many Orange County blondes. She didn't do too much besides get weirdly competitive with Alexis Bellino over their children, marriages, and everything in between. And other than the reunion revelation that she dated Jim Bellino before Alexis, there was nothing shocking or interesting about her time as a Housewife.

Lizzie Rovsek wasn't crazy or controversial. She was a high school valedictorian, beauty pageant winner, and swimwear designer, who just came across as kind and well-rounded. Lizzie did stand up to Tamra Judge during a cast vacation, but other than that she didn't get as much spotlight as she should have thanks to some far more outrageous personalities. Lizzie deserves another chance in my opinion.

Some of these Housewives were super boring, others were on the show way too early to still come to mind right away today. But either way, even the biggest Real Housewives super fans might not remember that they are still part of the franchise forever.

More like this
‘RHOBH’ Newcomer Sheree Zampino Is Still Close To Ex-Husband Will Smith
By Brad Witter
G Flip Shared How They Got Romantic With Chrishell Stause & Discussed Babies
By Brad Witter
Twitter Is Upset About The 'American Idol' Top 3 Results: "Who TF Is Voting?"
By Jake Viswanath
How 2 'American Idol' Singers Performed With COVID-19 & Made It Into The Top 5
By Jake Viswanath
Get Even More From Bustle — Sign Up For The Newsletter