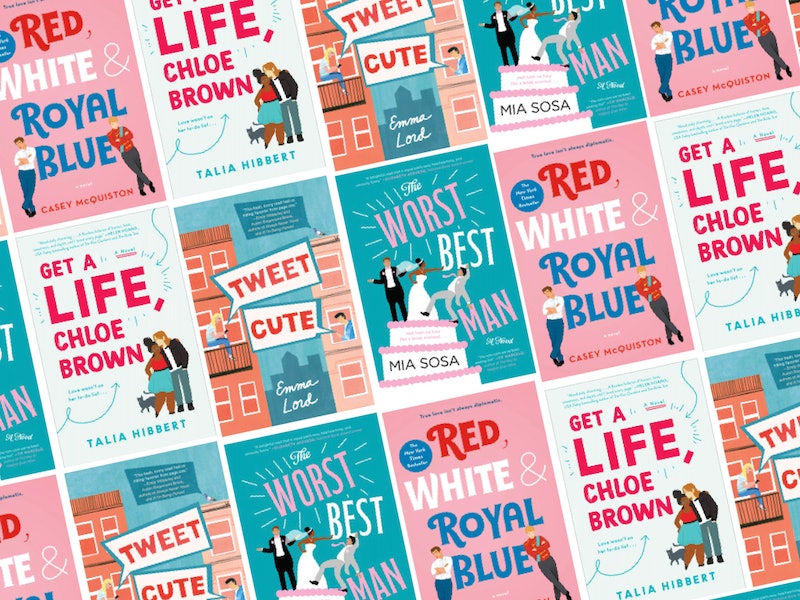 No matter your relationship status, chances are the coronavirus is disrupting your love life. For those in a relationship, it may be becoming harder to get that quality time in with your significant other while practicing social distancing. If you're single, it might not be the most optimal time to mingle. And even people who live with their partners may need to self-quarantine in an effort to prevent the spread of the disease.

Part of Courtney Milan's Worth Saga, Mrs. Martin's Incomparable Adventure centers on the eponymous Beatrice, a 73-year-old widow who lives life on her own terms. But when Beatrice meets Violetta, her nephew's 69-year-old spinster landlord, she finds that her own "terms" are moving further away from society's expectations than ever before.

Alex and Henry, America's First Son and the heir to the British throne, respectively, have always had it out for one another. After a very public brawl at a royal wedding, the two young men are thrust together for an extended PR campaign to save Alex's mother's re-election bid and the royal family's face. They've always been enemies, but now it seems there may be something there that wasn't there before...

Got a busy schedule, even with the quarantine? Pick up this Turner Series novella from Cat Sebastian for a quick read. Molly is a reformed thief and lady's maid whose employer keeps Alice as her retainer. They're nothing alike, yet irresistibly drawn to one another. When Alice's past comes back to haunt her, only Molly can save the day.

A Match Made in Mehendi by Nandini Bajpai

Simi Sangha loves art and has no interest in her family's matchmaking business, even though she's shown a knack for putting the right people together. Still, using her skills to help her high school classmates find dates couldn't hurt her profile, or so Simi thinks. But she's just matched up a popular jock with a relatively unknown classmate, sending her school's social scene into an uproar, and threatening her own reputation.

Get a Life, Chloe Brown by Talia Hibbert

By-the-book heroine Chloe Brown has her sights set on finally having the social life of her dreams, but she'll need a little help in order to achieve her goals. Enter Red Morgan, her tattooed motorcyclist neighbor. There's no one better to teach Chloe how to be a bad girl in the local social scene, so it's really too bad that she and Red don't exactly see eye-to-eye...

Nandy has a reputation to uphold, a carefully curated image befitting of a girl from Pacific Hills. But all that is set to change when a troubled teen boy moves into her parent's house He doesn't care about them, Nandy, or Pacific Hills. He's just stuck there for now — stuck in Nandy's house, with Nandy, for the whole entire summer.

Former Bustle lifestyle editor Emma Lord's debut novel features an enemies-to-lovers storyline that romance readers will adore. When chain restaurant Big League Burger pilfers a grilled cheese recipe off the local family-owned deli, the eateries' heirs — high school students Pepper and Jack — start a social media brawl. But as the two of them engage in Twitter warfare by day, they're falling in love by night, thanks to Jack's new, anonymous chat app.

In this follow-up to her 2018 novel, Shades of Wicked, Jeaniene Frost continues Ian and Veritas' love story. Saving the master vampire meant releasing evil entities into the world, and Law Guardian Veritas cannot abide their presence. Ian's in bad shape, but he knows one thing: he can't stand to be without Veritas — not now, not ever.

Matchmaker Bay is the place to have the romantic rendezvous of your dreams, but Eve isn't happy to be here. Her dearly departed great-aunt has left her the titular bed and breakfast as an inheritance, but Eve isn't certain she's up to the task of running Mermaid Inn — and that goes double when she learns that the man who broke her heart 10 years ago still lives in Matchmaker Bay.

Wedding planner Lina saw her own happily-ever-after fizzle out at the altar, but that hasn't changed her ability to do her job and do it well. Working for her latest client could change all of that, however, because taking the job requires Lina to work with Max — her ex-fiance's kid brother, and the man who ruined her one and only wedding day.

High school rivals meet under difference circumstances, in a gothic castle and an ocean away from their pasts, in this enemies-to-lovers romance from L.J. Shen. Back home, Vaughn is the town's golden bully, protected by his family's connections. Interning in the UK, however, his dark and brooding exterior might melt away in the presence of one of his former victims.

American actress Grace Kelly's 1956 wedding to Prince Rainier III of Monaco captivated the world and launched the sales of a new wedding dress style, fashioned to look like the princess' very own gown. In The Grace Kelly Dress, three women reckon with the enduring presence of the replica gown in their lives.

At age 23, Daisy Cooper has just reached the afterlife, 50 years too early. Death makes mistakes, as it turns out, and he's made a clerical error that's so not in Daisy's favor. Working closely with Death, however, Daisy realizes he might not be that bad — or bad-looking — after all.

Once Upon a Sunset by Tif Marcelo

With her social and professional life both in shambles, Dr. Diana Gallagher-Cary finds herself on a much-needed vacation to the Philippines. She's there to investigate the case of her grandfather, whom, she has just learned, survived World War II. But if she finds love as well, who's to stop her?

An undercover cop finds herself in the protection — and beds — of three men in this reverse-harem novel from Cassie Cole. Set in Boston's criminal underworld, Undercover Action follows Amber as she investigates and romances the sexy, brooding Finnegan brothers and their bartender, who happens to be another member of the police force.

On the Corner of Hope and Main by Beverly Jenkins

As the mayoral race heats up the small town of Henry Adams, Kansas, a variety of new hopefuls try to secure votes from the townsfolk. In the middle of it all is Bernadine, the literal owner of Henry Adams, who's reeling from a romantic betrayal. As her lover tries to make amends, a rogue element from her past returns to shake things up in the sleepy Kansas town.

The single father to a 6-year-old daughter, rugby star Jacob wants nothing more than stability for their little family. Juliet represents anything but stability. Jacob's former classmate can't stay out of the tabloids, so she's the last thing he and his daughter need right now. For her part, Juliet never plans to date an athlete again. So why can't the two of them stay away from one another?

After a lifetime spent doing what everyone expects, Anu Desai is ready for a change. A newly single mom, Anu opens a yoga studio as part of her new lease on life. Her parents don't approve of her separation from her husband, however, and as the protagonist of Sonya Lalli's new novel tries to make a new home for her daughter from scratch, she has to wonder: is she doing what she really wants, or still trying to meet others' expectations?

A vampire mercenary discovers a half-breed vampire with no idea who or what she really is in this new Black Dagger Brotherhood novel from J.R. Ward. Syn is taking a big risk, keeping his hits a secret from the Brotherhood, so when a new enemy arises, he and Jo will have to work together if they want to live. Jo knows nothing about him, beyond their sexual chemistry, but can she really trust the man who rescued her?

For the cowboy romance fans, there's Carly Bloom's Cowboy Come Home. A second-chance romance, the novel centers on Claire Kowalski, a woman still living in the same small town where Ford Jarvis broke her heart years ago. Now, Ford's back, and Claire is going to make dang sure she doesn't fall for his tricks again... right?

Set in North Carolina's Outer Banks, Lilah Suzanne's Tack & Jibe centers on Willa and Lane — a woman unwittingly entered into a sailing contest, and the four-time winner of said contest. Willa has asked the other woman for help, but even Lane's sailing know-how may not be enough to win Willa the title.

To Have and to Hoax by Martha Waters (Apr. 7)

A Regency romance, Martha Waters' To Have and to Hoax follows one couple's hilarious efforts to win each other's affection while feigning disinterest. James fabricated a serious injury in order to draw Violet to his side, and now it's her turn to get him back.

The Happy Ever After Playlist by Abby Jimenez (Apr. 14)

Her fiance's sudden death two years ago has left Sloan reeling. Adopting a stray dog named Tucker is the best thing that's happened to her in a long time, but when a man shows up claiming to be Tucker's owner — and trying to reclaim the pup — Sloan realizes she may have to fight to hold onto him. Jason really wants his dog back, but as his conversations with Sloan grow heated, will he start to want her more?

It's a classic story: boy meets girl, girl chats with boy, stranger tweets their whole encounter and nearly ruins everything. Katrina keeps her private life private for a reason, but now she's #CuteCafeGirl, the one who chatted up #CafeBae — a guy she doesn't even like like that. She's really interested in Jas, the hot bodyguard who's given her someplace to lay low until her viral fame fizzles out. But Katrina and Jas are just friends... aren't they?

Inked with a Kiss by Jennie Davids (Apr. 28)

Jamie and Sierra are doing a lot of juggling these days. One's the daughter of alcoholic parents, trying to keep her tattoo studio afloat while raising her 12-year-old daughter. The other is a social worker whose cases may be threatened by looming budget cuts. When the two women plan a fundraiser together, their chemistry is undeniable. But so is their major age difference.

More like this
All The Clues Clint & Gina Aren’t Still Together After 'MAFS' Season 16
By Brad Witter
Mack & Domynique Reportedly Had An "Epic" Breakup On 'Married At First Sight'
By Brad Witter
Why Being “Too Sensitive” In Relationships Is A Good Thing
By Lexi Inks
The 3 Zodiac Signs Most Likely To Get Married Later In Life
By Kristine Fellizar
Get Even More From Bustle — Sign Up For The Newsletter
From hair trends to relationship advice, our daily newsletter has everything you need to sound like a person who’s on TikTok, even if you aren’t.