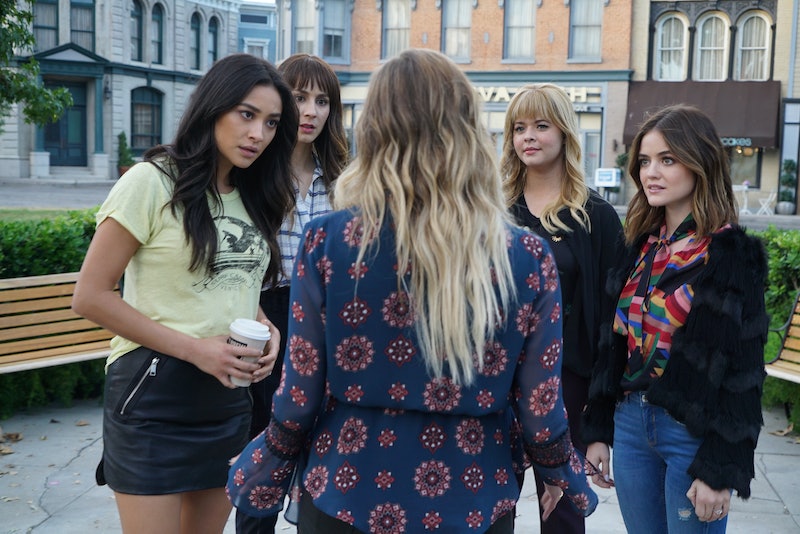 The mystery has officially been solved — or at least one of the many mysteries. Spoilers ahead. After seven seasons, Pretty Little Liars revealed who A.D. is. While finding out that Spencer has an evil twin named Alex Drake was a major bombshell, that wasn't the only loose end the series needed to tie up. And as satisfying as that reveal may have been, there are still questions Pretty Little Liars never answered.

Considering just how many characters visited Rosewood during the series' 160 episodes, it makes sense that not everyone got a proper goodbye or even an adequate backstory. But it's still pretty confusing that some people (hello, remember Aria's brother?) seemingly fell off the face of the earth and never were heard from again.

Below are a series of questions that Pretty Little Liars didn't answer over the course of the show. By no means is this a comprehensive list, since there are probably a dozen other aspects that left you scratching your head. But hey, it's a solid place to start. And if showrunner I. Marlene King wants to offer up any answers, PLL fans will obviously welcome any explanations with open arms.

Seriously, her little bro was nowhere in sight.

2. Actually, What Happened To Mike In General?

Is he OK? He totally vanished.

At one time, the two were deeply in love.

4. Speaking Of Brothers, Why Didn't Wesley Attend The Wedding?

5. How Did The Moms Ever Get Out Of The Basement?

The moms acknowledge the mystery in the finale, when Veronica goes, "Oh my god, remember how we got out of there?" — without actually saying how.

6. And Why Was It So Bad That Pam Fields Didn't Drink For A Year Afterwards?

What. Happened. In. The. Basement.

7. Who Makes All The Masks In Rosewood?

8. How Do They Make All Those Masks?

9. And Does The Mask Maker Know What They're Are Used For?

As in, tormenting people and being way too deceiving.

10. Speaking Of Masks, Who Was In That Creepy Halloween Mask?

No explanation was ever given. It wasn't Noel.

I. Marlene King once told Bustle even she didn't know.

12. What Did Sydney Get Out Of This Whole Situation?

Like, why was she helping Jenna in the first place?

13. And Why Did She Look So Much Like Jenna?

It really seemed like they were gonna secretly be sisters.

14. What Was Bethany Young's Deal?

She was buried in Ali's grave, and killed Toby's mom while in Radley. But how she fits into the whole story is still unclear.

15. And Why Did Bethany Draw These Pictures?

Or at least, she drew the bottom ones. But that top one from the game looks a lot like her handy work.

16. Who Was That Blonde Girl In Jason's Window?

Way back in Season 1, Spencer spots someone in Jason's window. She looked a lot like Ali, but no explanation was given.

17. What Exactly Did Maya Know?

In this scene, Mona speaks in an acronym: "Miss Aria, You're A Killer, Not Ezra's Wife." It spells out "MAYA KNEW," but no one knows what she knew.

18. Why Does Mona Love Paris So Much?

She moves there at the very end of the finale, but she also decorated her high school bedroom with tributes to the city of love. Why?

Sure, she's a genius, but that's not the same as being an architect.

20. Why Did Sara Harvey & Bethany Young Look So Much Alike?

There were theories they were the same person, yet none came to fruition.

21. Why Did Charlotte Kidnap Sara In The First Place?

22. Why Did Rhys From The Carissimi Group Look Just Like Jason?

This seemed to hint at another twin connection.

It was implied when they brought flowers to her grave, but would A really kill someone just to save Hanna's mom?

His intentions were never really fleshed out. Was he really sincerely helping Hanna?

25. Why Did Eddie Lamb Recognize Aria?

That Radley scene will forever be suspicious.

26. What Happened To Melissa In The End?

Yeah, Mona was wearing a mask with her face, but her storyline never got wrapped up.

27. Why Was Melissa's Helmet At Bethany's Stable?

It's unclear how much Melissa really knew.

28. Was That Spencer/Maddie Ziegler Scene A Twin Reference?

It sure was something. (And by something, I really mean "creepy.")

29. Did Peter Know About Spencer's Twin?

It could explain his connection to Radley, or he could've been totally in the dark.

30. Who Was Wren Drawing Back In Radley?

It's unlikely he'd already met Alex a this point. Was it supposed to be Ali in her red coat as Vivian Darkbloom? And if so, who are those other little kids?

31. Why Was Ezra So Into Chickpeas?

Yes, it was an excuse to get Aria to go to the store, but what a random food choice.

Her storyline kind of fell to the wayside.

33. Did Nicole Mind That Ezra's Book About Her Was Being Made Into A Movie?

Since you know, it involves her personal business.

34. Why Is Mona So Fascinated By Dolls?

Not only does she have quite the collection, but she now owns a doll shop.

35. Was Mona The One Who Sent Ali That Voodoo Doll In Season 1?

Or was this a hint from Charlotte way back when?

36. What Ever Happened To Tippi The Bird?

Was this Charlotte's pet? It's never been explained.

37. What Did Noel Have Against The Liars Anyway?

There's no explanation for what he gained out of this. And he wound up beheaded.

38. How Is This Scene Possible?

Hat tip to this Twitter user, because it makes zero sense.

That is some elaborate technology, but the girl couldn't even do a convincing British accent.

While the PLL finale set up the show for a spinoff, it's still unlikely that all of these lingering questions will ever get answered. The only solution? Let the theorizing continue.