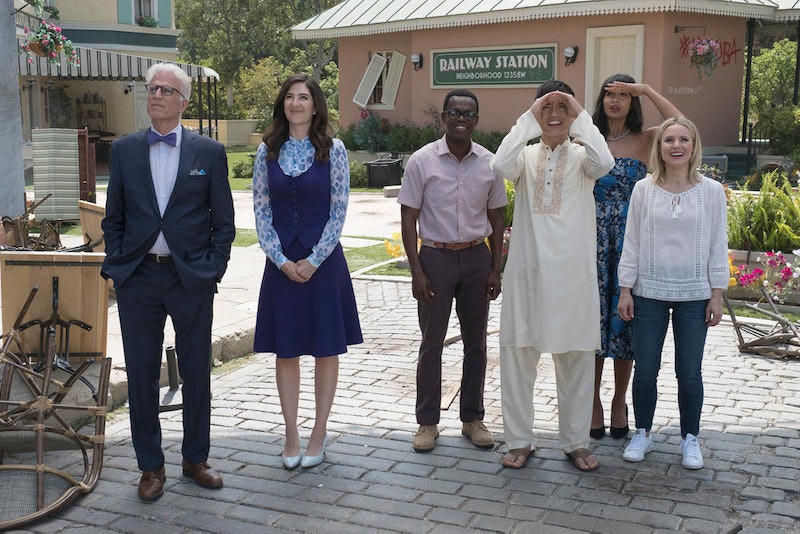 Is this the best group costume idea of 2018? You bet your ash it is. Not only is it easy, cost-effective, and pop-culturally relevant, but each of these creative The Good Place Halloween costume ideas are totally forkin' original — as in, you can't just buy them pre-packaged at a store.

If you haven't been watching this total treat of a TV show, well, what the fork are you waiting for? It's a quirky, pun-filled comedy that explores the age-old concern about where you end up after you die — ie. "The Good Place" AKA heaven, or "The Bad Place" AKA hell. (People who land in The Good Place are restricted from using curse words, by the way, which is where fun substitutions like, "ash," "fork," and "bull-shirt," among others, come into play.)

This costume round-up is all about the main characters — Eleanor Shellstrop (played by Kristen Bell), Chidi Anagonye (William Jackson Harpe), Tahani Al-Jamil (Jameela Jamil), Jianyu Li/Jason Mendoza (Manny Jacinto), Michael (Ted Danson), and Janet (D'Arcy Carden) — and their most recognizable get-ups. Bonus: there are *two* options for Jacinto's character — one for Jianyu, the silent monk, and one for Jason, the dopey, goofball EDM DJ.

Halloween is right around the corner, though, so it's time to get your ash in gear. And when the compliments on your costume come flooding in, don't say "thank you" — embody Tahani and tell your admirers, "I would say I outdid myself, but I’m always this good. So I simply did myself." Yep.

Eleanor tends to keep her outfits pretty casual. Think: this Canadian tuxedo, these top and cardigan combinations, or one of her many flannels — and is primarily a jeans-and-t-shirt kind-of-gal.

While you could undoubtedly find something within your own closet that'd work, this rainbow-striped hoodie from Macy's is pretty much a dead ringer for the one she wears on the show (and at a fraction of the price). Pair it with some dark skinny jeans, her much-loved Stan Smiths, and you'll pretty much look just like her — no bull-shirt.

Chidi, for the most part, stays pretty buttoned-up — literally and figuratively. He kind of, sort of, almost ends up letting loose a little bit in more recent seasons, but even then, his wardrobe errs on the conservative side.

During one episode, Eleanor refers to Chidi as "the human sweater vest," which is — albeit a little harshly — pretty forkin' accurate, seeing as how he regularly incorporates them into his wardrobe. Thus, the quintessential Chidi costume is, let's call it, "overly Ivy League": a tasteful plaid dress shirt (tucked in tightly, of course), belted khaki pants (freshly pressed), and a sweater vest of your choosing (but the bright yellow option is kind of obnoxiously perfect, right?).

Tahani loves her some fancy frocks. OK, Tahani loves for everything she says, does, and wears to be fancy, including her signature strand of pearls. They truly add an air of International Sophisticate, don't you think? Five Gwyneths, no question.

Every now and then, she'll mix things up with an A-line, knee-length skirt and a sleeveless, embellished halter-neck blouse. More often than not, though, you'll find her flawlessly sashay-ing around in an either sweetheart-cut or Bardot-style strapless dress — many of which have come straight from ASOS. (Don't tell Tahani. She'd think anything other than couture was beneath her.)

Jason Mendoza (an aspiring EDM DJ from Florida) was mistaken for Jianyu Li (a Buddhist monk who "obeys a strict code of silence") immediately upon accidentally arriving in The Good Place. They could not be more different in actuality, but as it turns out, both of their wardrobes are super chill.

If you're a bit more antisocial, though, you should definitely go with Jianyu. First of all, the costume pretty much requires that you uphold his vow of silence by not speaking to anyone all night long. Second, this monk-like linen tunic and these drawstring linen pants will be super comfy.

For Jason, all you need is like, a gold chain, a loudly-colored — and possibly velour —  track suit, and/or a Jacksonville Jaguars jersey. Work on coming off as endearingly dumb, and maybe blurt out "Blake Bortles" from time to time.

Michael — the initially deceptive-turned-sincere architect of The Good Place — is all about a bowtie. Actually, he's quite fond of a color-coordinated, mixed-pattern bowtie/pocket square set, which adds a little whimsy to his otherwise serious business suits.

"[Michael is] in love with humankind and wants to emulate this kind of professor [in the first season]," The Good Place costume designer Kirsten Mann told GQ. He's sharp, dapper, and always polished — even when navigating unexpected disasters, like giant, gaping doomsday sinkholes.

Janet is the all-knowing, Siri-esque, human-like robot assistant to Michael. Her outfits are as colorful as she is cheerful, and her purple skirt-and-vest suit combo was pretty much a mainstay for the entirety of the show's first season.

Janet loves to dispense all kinds of fun facts whenever given the opportunity, so here's an actual fun fact about how her costume came to be: D’Arcy Carden — the actor who plays Janet — brought in clothes from her own closet as inspiration for her character.

"I brought this little red tulip skirt, a tan vest, and this ruffly, puffy-sleeved white shirt," Carden told Racked in 2017. "When I tried on that outfit, [the costume designer and I] both were like, 'This is it.' We knew we wanted purple, too, but we basically used the outline of this outfit I already had in my closet for Janet."

Ok, there you have it. Easy, inexpensive, and totally convincing ideas for dressing up as the main characters from The Good Place this Halloween. Now, quit bull-shirting around and go get your costumes together.