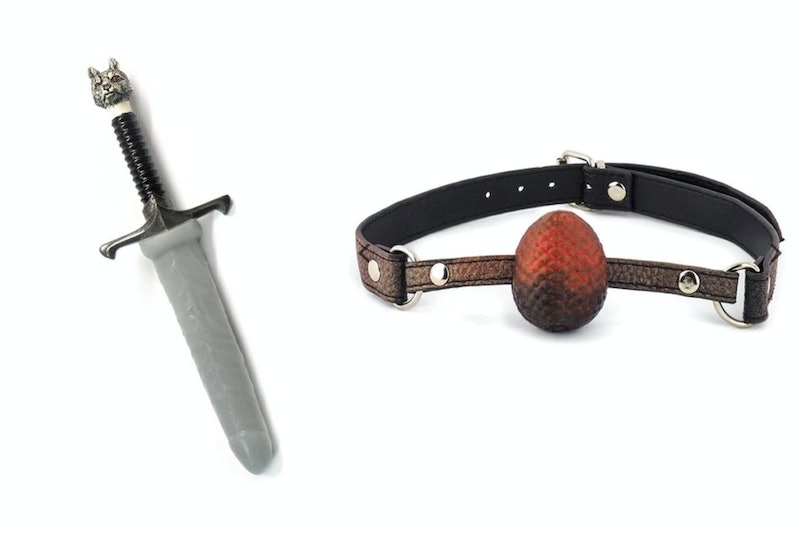 Since its first episode in April 2011, Game of Thrones has managed to become a gigantic, worldwide phenomenon. Based on the series of books, "A Song of Ice and Fire," by George R.R. Martin, Game of Thrones is a medieval fantasy world of dragons, corrupt royalty, and lots and lots of death. But, as everything must, Game of Thrones will soon come to an end and fans will get to see who actually survives the mayhem of Seven Kingdoms which, apparently, isn't going to be too many people. While the ending of the show is bound to leave a hole in the lives of those who grown to love it, there's at least a long line of Game of Thrones merchandise to keep everyone happy. There are even Game of Thrones themed sex toys that you can legit buy and use.

Thanks to the creative minds at Geeky Sex Toys, you can procure yourself a toy from their "Game of Moans" collection, because who doesn't want to infuse some dragon play into their sex life? Although these toys are in no way affiliated with HBO, they're definitely the closest thing you're going to get to Games of Thrones inspired sex toys.

More like this
Meet The Disney Imagineer Bringing 'Guardians Of The Galaxy' To Epcot
By Charlie Mock
Charlotte Tilbury Just Launched A Royal Collection To Mark The Queen’s Platinum Jubilee
By Tomi Otekunrin
Grey's Anatomy Fans Refuse To Accept Kaimelia's Shocking Relationship Update
By Brad Witter
Oops! The 'Stranger Things' Monopoly Game Has Spoilers For Season 4
By Alyssa Lapid
Get Even More From Bustle — Sign Up For The Newsletter