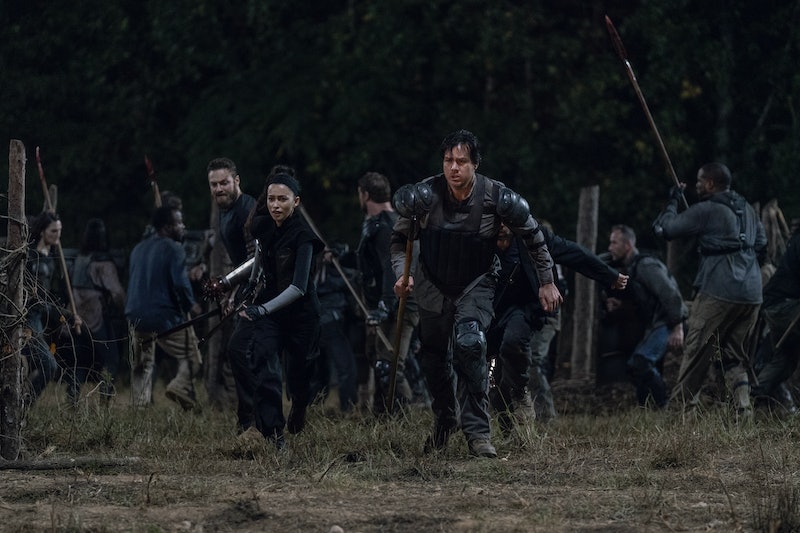 Spoilers ahead for The Walking Dead Season 10. Alpha is officially finished having any semblance of a pact between the Whisperers and the other communities. By sending her horde to attack Hilltop, Alpha officially started the Whisperer War from The Walking Dead comics. But the impetus for the war in the AMC series is different from the comics. While fans of Robert Kirkman's comics may already know the outcome of the war, the TV series is putting its own spin on it, so fans should prepare for some switch-ups.

Showrunner Angela Kang insinuated to Entertainment Weekly that the war will be over ahead of the Season 10 finale, saying "there is some stuff that could feel like a finale, smack in the middle of the run of the back half." That might mean the Whisperer War won't last that long, but while it's here, here are seven theories about how this battle will go down in Season 10.

In the comics, Ezekiel was one of the victims of the Whisperer massacre at the Kingdom Fair. He's still kicking on the TV show, but "Morning Star" did seem like a swan song for him. He revealed he has cancer, slept with Carol one last time, and made amends with Daryl, so it sure feels like Ezekiel will meet his Whisperer fate during the battle.

The show has already diverged from the comics regarding how the Whisperer War starts. Beta attacks Hilltop because Negan beheaded Alpha after earning her trust. Knowing Negan's personality, it seems likely that he'll engage in a similar betrayal on the show. But since the TV series doesn't like to follow the comic book to a T, perhaps Negan won't best Alpha as he does in the comics and Alpha will end up killing him. But that doesn't mean Alpha won't die by someone else's hands before the war is over.

3. Alpha & Carol Will Have A Showdown

Earlier in Season 10, an Alpha-Carol face-off seemed like a done deal. Yet, this theory isn't holding up as well after Carol fell for Alpha's trap with the cave. Carol is a bit defeated now and should hopefully have learned that vengeance won't get her anywhere. But it's possible she'll still get a chance to avenge Henry's death.

Alpha had asked her daughter to kill her after her fight with Daryl, but Lydia refused. Yet, in a battle scenario, Lydia may have no choice but to kill her mom. Lydia could be motivated to commit matricide if Alpha hurt or killed Daryl or Carol. While Lydia and Carol aren't on the best of terms, they had a bit of a heart-to-heart during "Morning Star," and Lydia could want to make up for Henry's death if Carol's not around to do so.

This would be a huge departure from the comics, but Eugene seems a bit too happy with his love connection with Stephanie over the radio. Through his communications with Stephanie, Eugene will eventually connect the communities to a new group of people from the Commonwealth. But on the show, maybe Eugene won't make it to his date with Stephanie in West Virginia. In that case, it would be up to Rosita, who is the only other person who knows about Stephanie, to facilitate the introduction. Or maybe Maggie could step in since Lauren Cohan may cameo in Season 10 before returning for good in Season 11.

If Beta isn't killed in battle by someone like Daryl, then an injured Beta could retreat into the wilderness like he does in the comics where Aaron eventually offs him. But the TV twist could be that Connie and Magna find Beta in the woods after making their way out of the cave alive and they get the opportunity to kill Alpha's second-in-command.

7. Michonne's Mission Will Help Save The Day

Michonne disguises herself as a Whisperer during the war in the comics. But it's not certain that Danai Gurira will even make it to the Whisperer War. While her status is currently unknown, Michonne went with Virgil to the naval base Bloodsworth to obtain weapons. As Season 10 is Gurira's last season on The Walking Dead, a fitting final act would be destroying Alpha's walker herd. However, Entertainment Weekly reported that Gurira's final Walking Dead episode has her facing off with walkers in a research facility and infirmary, so maybe Michonne won't make it off Bloodsworth. (Or, a more optimistic take is her final moment will occur after the Whisperer War). But whether it's Michonne, Virgil, or a member of Oceanside, someone better bring those weapons to help the Alexandria and Hilltop communities defeat the Whisperers and their horde for good.