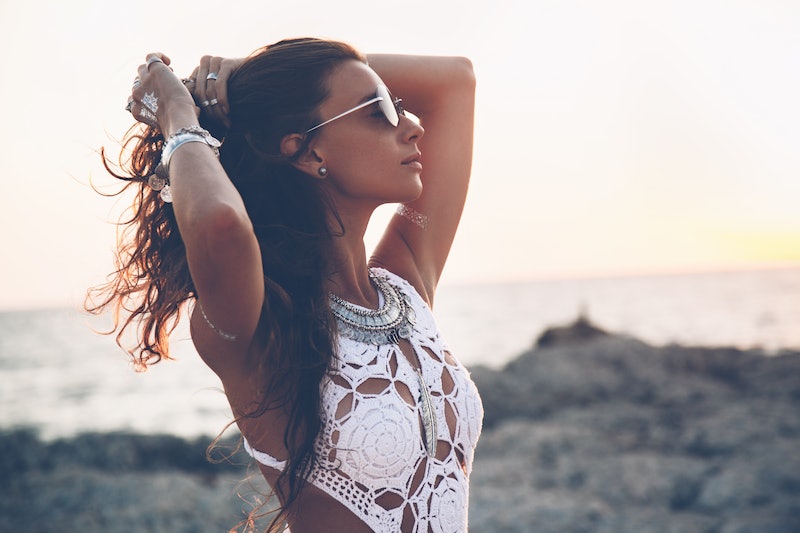 Did you hear that? It was the sound of all the lil' crabby, moon-ruled Cancer babes waving their claws up at the astro-heavens, because Mercury retrograde summer 2019 began on Sun., Jul. 7 — right smack in the middle of Cancer season. Sorry, Cancer babies. It's never fun when one of the most maligned astrological transits has to hit in the middle of your birthday season, but rest assured: You're not in this alone. We're all in for a rollercoaster of a retrograde for the remainder of July, until the planet goes direct again on July 31.

While some zodiac signs might sail through this transit with relative ease, other zodiac signs are more likely to get hit hard with Mercury's energy — and yes, one of those signs is Cancer. In fact, this particular retrograde might be more challenging for Cancer suns than any other zodiac signs. This is partly because of Mercury's current location. The infamous planet that rules communication, timing, and technology already made its way through Cancer territory during its retroshade period and is now in Leo — but because of its current backward motion via the retrograde, it''ll soon be dipping back into the sign of Cancer on July 19, and will keep moving further back through it until it stations direct on July 31. At that point, it'll start back up on its usual, forward-moving path again, going over the same chunk of Cancer land for the third time yet again. For a private, sensitive, and home-dwelling person like you, Cancer, that's a whole lotta action.

And that's not all. This Mercury retrograde transit also began right smack in the middle of the summer's eclipse season, which also happens hitting the sign of Cancer hard (the new moon in Cancer on July 2 was also total solar eclipse, if you recall!).

That said, Cancers are feeling a ton of heavy, reflective, and mildly chaotic energy between both the retrograde and the eclipses, and it might be emotionally intense. "Mercury realigns with your Sun at the end of the retrograde period, which may make your emotions and feelings go up and down from high to low," explains astrologer Lisa Stardust to Bustle in an interview about Mercury retrograde. I don't blame you one bit if you're feeling overwhelmed, moody, and exhausted right about now, Cancer.

So while this energy is undeniably intense, there are also plenty of things to take advantage of during such an astrologically busy time for your sun sign — and lots of ways you can protect yourself if the going gets tough. Bustle chatted with the fabulous Lisa Stardust about the do's and don'ts of living through this summer's backspin as a Cancer, and we've put together a little survival guide just for you, moon babies. Here's are some tips on what Cancer zodiac signs should and shouldn't do during Mercury retrograde.

DO: Upgrade Your Self-Care Regiment

You read the above paragraphs, right? Whew. This summer's astrology is hitting you hard, so you should absolutely set aside some extra time for major self-pampering. "Treat yourself to some extra TLC (like a bath, a mani/pedi, or a massage)," advises Stardust. "Take care of yourself!" Indulge your very Cancerian urge to stay in and nurture yourself. Your body and soul could probably use the extra lovin' right about now.

I know, I know, you're probably like, "Pshhh, have you ever met a Cancer?" I get it — y'all are usually pretty sensitive and emotionally in-tune, so it can be difficult to let things roll off your back. But remember that Mercury retrogrades are notorious for causing miscommunications and misunderstandings, and you'll be especially vulnerable to this as the planet retrogrades through your sign. "Be sure to take others critiques with a grain of salt (even though it may be hard for your tender heart)," shares Stardust.

DO: Protect Your Energy

Between the eclipses that are directly hitting you, Mercury retrograding in your sign, and spotlight-lovin' sun having just beamed on you throughout Cancer season, you've got a lot going on energetically. "Be conscious of who you surround yourself with," says Stardust. "Good vibes only!" You're likely a naturally nurturing person, but don't let anyone else's retrograde baggage get dumped on you — now's not the time. So do whatever it takes to protect your own energy: Get out those energy-shielding Mercury retrograde crystals, maybe plan a retrograde protection ritual or two to center yourself, and sage, sage, sage.

DON'T: Jump To Any Conclusions In Love

Mercury retrograde is never a good time to make major decisions, and that's because the backspin tends to cloud our judgment, intellect, communication abilities, and attention to detail. When it comes to Mercury retrograde and dating, the same rules apply. "Don’t make any major decisions in love, because you may want to backtrack your emotions later on," warns Stardust. Whether it's starting a brand new relationship or jumping into a break-up, love life decisions that go down during Mercury retrograde tend to not have the lasting power we want them to. Proceed with caution.

DO: Exercise Major Caution When It Comes To Money

Venus, planet of pleasure, luxury, and money, is currently in your sign, Cancer — but with all the Mercury retrograde energy that'll be hitting you, it's going to be a confusing time for finances, and you might be a little extra prone to unwise financial decisions. Instead, reel in the spending and use this time to plan for smart finance moves instead. "Revise your savings plan during this retrograde," advises Stardust. "[And] don't overspend, try to live on a budget."

And remember: Venus in Cancer can make us feel extra sympathetic around money issues, but Mercury retrograde is not the time for you to loosen the reigns on your cash flow. "Don’t lend money to anyone, even if they are a good friend, because you won’t get it back," warns Stardust.

DON'T: Get Involved In Other Peoples' Business

Cancer baby, as you can see, you've got a lot on your plate through the month of July — so to avoid any additional retrograde-fueled misunderstanding or dramas, you're going to want to focus on your own sh*t and pay other people's business no mind. "When it comes to other people’s drama, stay in your lane," advises Stardust. Especially during this transit, there's nothing to be gained by trying to get into the minds (or dramas) of others. Do you and stay true to yourself — top priority, K?

DO: Keep It Light & Have Fun

You've got both Mercury retrograde and eclipse season hitting your sign this summer, Cancer — that's no lightweight astrological load! It'll be easy to feel weighed down and maybe even overwhelmed, so try to put off anything that feels too serious (when you can, anyway!) and keep your interactions friendly, light, and gentle. "Don’t let others bring you down," advises Stardust. "Focus on keeping your energy high." Focus on the things that bring you simple pleasure — it'll help keep you grounded and in the moment.

And Stardust leaves you Cancer babies with a few final words of Mercury retrograde advice: "Give yourself a break and have fun." You deserve it — and that attitude will help you sail through this potentially rocky month with grace.