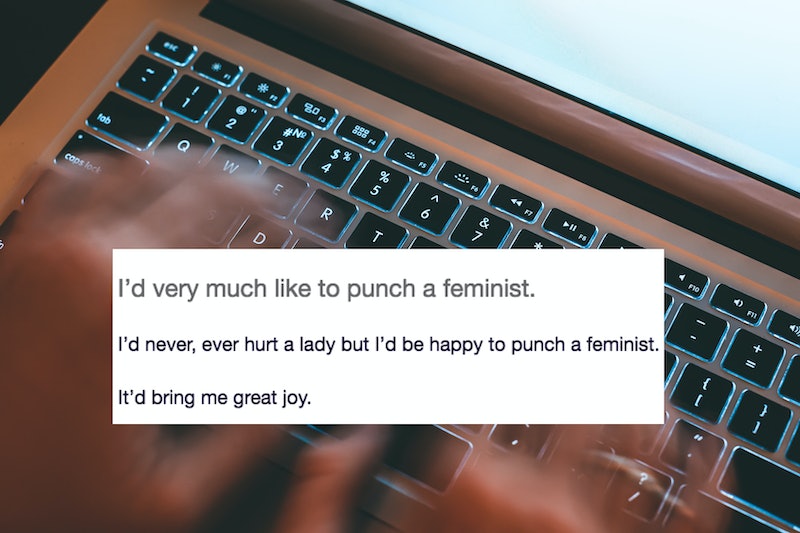 A lot of the time, the internet makes me despair. (I know — that’s kind of a weird thing to say, given that I make a living on the internet, but it’s true. The internet is often full of terribleness. But sometimes, it is also full of wonderfulness — like, for example, the reaction to a Tumblr post titled “I’d very much like to punch a feminist.” That reaction has been, in a word, phenomenal: Tons of people who identify as feminists stepped up to the plate,offering not to stand still while the Tumblr user punched them, but rather, to stand up to the Tumblr user in question by facing them in fight — and now that the Tumblr thread has made its way to Twitter, everyone is falling in love with it all over again.

The original post and the ensuing challenges are actually quite old; although it’s since been deleted and its account seemingly abandoned, the post itself first arrived on the internet in December of 2013. (It’s still viewable via the Wayback Machine, by the way — click through to see what it looked like on Dec. 8, 2013, about four days after it had been posted.) The post read, in its entirety:

I’d never, ever hurt a lady but I’d be happy to punch afeminist.

At the time of its writing, though, user after user reblogged it and added to it, with many responses including selfies from people who identify as feminists, brief descriptions about who they are, and a challenge. The statement all of these reactions make is something along the lines of, “You want to punch a feminist? Go ahead. Punch me, if you can. I’ll punch right back.” It made a huge splash on the microblogging site at the time — and it doesn’t really seem to have died down much in the meantime. Indeed, it's spent the past four or five years circulating Tumblr, because, well… the internet is forever.

What’s more, it’s going viral all over again right now — although this time, it’s thanks to Twitter. On Feb. 6, 2018, Twitter user @itzzkaittweeted screenshots of the whole thing along with the comment, “This is the best post I’ve ever seen.” And you know what the best part is? More folks are leaping in to join the fray.

Some were in the ggothclaudia camp:

While others were more physically imposing:

And some just had this to say:

Sometimes, humans are great. Clearly this is one of those times.

There’s a lot that’s wrong about the original post. If you read between the lines, it implies that “ladies” can’t be feminists, as well as that feminists can only be women, both assertions of which are false; what’s more, no matter which way you slice it, there’s a boatload of misogyny in the whole thing, both overtly and covertly. (Worth noting: Other posts on archived versions of the Tumblr page show that it belonged to a British user who used male pronouns and identified as conservative.) The idea of punching a feminist — who, by the post’s logic, may only be a woman — bringing someone “great joy” hits the overt angle; that’s clearly hostile sexism. Meanwhile, statements like, “I’d never hit a lady” echo a lot of the tenets of benevolent sexism — namely, the ideas that women are weak and that they need protecting from the big, bad world.

Also, as journalist Kelly Mattison pointed out on Twitter:

See also: Gaslighting, cycles of kindness and rage, and other signs of intimate partner abuse.

Nothing about any of that is acceptable.

Now, I’d be willing to bet that there are plenty of people who might see this and think, “Well, everyone keeps talking about punching Nazis these days — if punching feminists isn’t OK, then why does it seem like punchingNazis is OK?” But while I’m not an advocate of violence in most situations (self-defense might be the exception),I’d argue in response that the statement, “I’d very much like to punch a feminist” is inherently different from the statement, “I’d very much like to punch a Nazi.” Feminism is about working towards equality for all people, regardless of gender, race, orientation, and ability. Nazism and white supremacy are about eliminating everyone who isn’t white, Christian, straight, cis, and able-bodied. (We literally had a world war about this.) The ideologies are not the same, and the differences matter.

(Punching should probably still be kept to a minimum, too, though, so just bear that in mind as well.)

For what it’s worth, ggothclaudia is the clear favorite of the original bunch; this was the case both back in 2013 and in this month’s Twitter thread.

And, I mean… it’s not hard to see why. She may not look like the most powerful figure, and maybe she doesn’t have the fighting skill but she’s willing to stand up for both herself and others. That’s rad. And for that reason, she’s become something of a symbol.

Go forth. Be your own ggothclaudia. And find otherggothclaudias to hang out with. Have each other’s backs. Fight for each other’s rights. And don’t let the bastards grind you down.