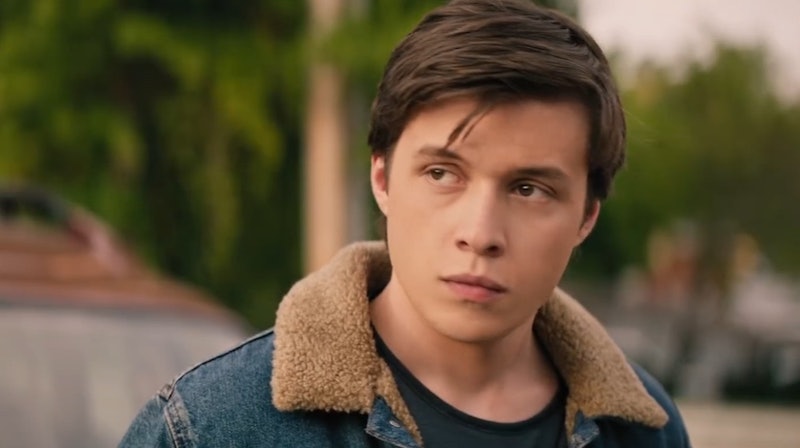 Love is about to be in the air again. A Love, Simon TV series is coming to Disney+, the network's forthcoming standalone streaming service, The Hollywood Reporter confirmed on April 11. Only this time, Simon (played by Nick Robinson in the 2018 rom-com/drama) won't be at the center of the story. According to THR, the new TV show will be based on author Becky Albertalli's Leah on the Offbeat, the 2018 sequel to her previous YA novel, Simon vs. the Homo Sapiens Agenda.

If the title didn't give it away, Leah on the Offbeat, of course, focuses on Simon's BFF Leah (played in the movie by Katherine Langford). While no details on the TV series' specific storylines have yet been revealed, if it stays true to the book's plot, fans will quickly see that Simon wasn't the only one who had a secret. Set during Leah's senior year of high school, the novel follows the skilled drummer as she navigates her own sexuality, along with other typical teen issues. Although her mom knows that she is bisexual, Leah hasn't told any of her friends, including Simon, surprisingly enough.

The reason that's so shocking, for those who didn't see Love, Simon, is that, in the movie, the title character faces and eventually celebrates his gay identity, after falling for an anonymous online pen pal or sorts. And Leah, naturally, was right there with him through his coming out process.

Either way, it sounds as though the Disney+ series will be a huge win for mainstream LGBTQ+ TV representation — just as its cinematic predecessor was as well. This year, Love, Simon even won the GLAAD Media Award for outstanding film.

"We made this film as a chance to give LGBT kids back ... a piece of their childhood — an opportunity to go to a movie theater, get a popcorn with their family and friends and not have to imagine if the lead character shared their sexuality or make the gay sidekick bigger in their head, but to actually see themselves and their story up there on the big screen," openly gay director Greg Berlanti said in his GLAAD acceptance speech. "And to remind audiences of all genders and all sexualities that all love stories are just as entertaining and just as equal."

Berlanti, who also works on hit shows like Riverdale, Chilling Adventures of Sabrina, and You, unfortunately won't be part of the new Disney+ series, per THR, due to a conflicting contract with Warner Bros. Television. While Love, Simon screenwriters Elizabeth Berger and Isaac Aptaker will, however, return as showrunners, none of the movie's original cast, which also included Jennifer Garner, Josh Duhamel, Alexandra Shipp, and Keiynan Lonsdale, will be in the new show either, according to THR.

The Leah-centric Love, Simon TV series is but the latest announcement of upcoming Disney+ programming. Among other series fans already know about are several Marvel dramas, with one show focusing on Loki and another action-drama about Hawkeye reportedly in the works. According to THR, other shows include "dramedy High Fidelity starring Zoe Kravitz, a new take on High School Musical, Disney-themed entry Book of Enchantment and Diary of a Female President."

While Disney+ doesn't even launch until later this year, its lineup sounds more and more exciting by the day — especially with the Love, Simon sequel now on its roster.