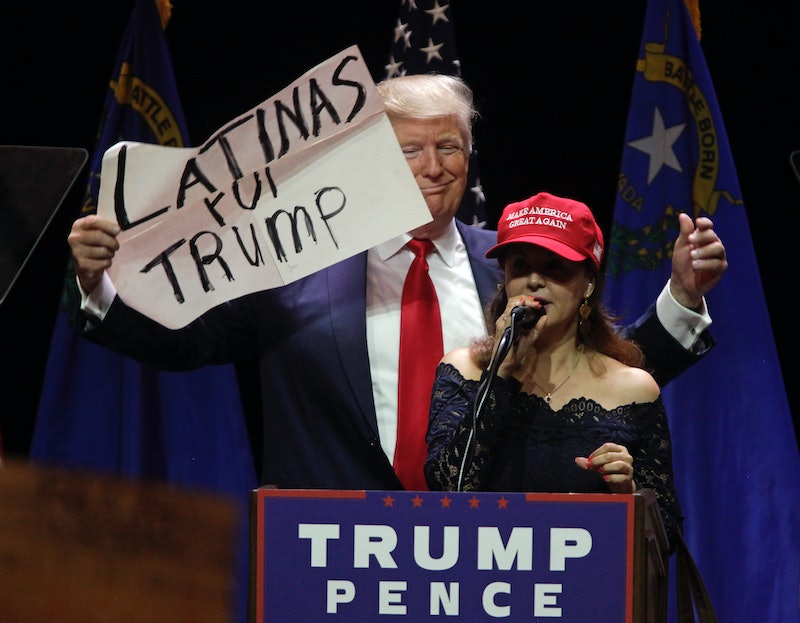 Since Donald Trump won the presidential election, Latinxs of color and laws that protect them have been consistently under attack. Jeff Sessions' recent announcement that the program Deferred Action for Childhood Arrivals (DACA) will be ending in six months is a monumental setback for Latinx communities, especially those that regularly experience discrimination in Trump's America. But with this development is an opportunity to examine a popular misconception about the Latinx community: that it's a monolith, and that all Latinx people experience this kind of discrimination. While white Latinxs do experience certain prejudices, the color of their skin affords them privileges that Latinxs of color can't access, and often times, racism displayed by white Latinxs — against Latinxs of color — goes unchecked. Now more than ever, white Latinxs need to be better allies and stand with Latinxs of color.

My family, who immigrated to the United States from Cuba, passed along their anti-blackness to me and my siblings. As a child, my father told me about a Cuban legend about “the black spot on the banana,” which insinuated having a darker-skinned child was a "curse." As I grew up, his racist "jokes" and urban legends morphed into outright discrimination against Afro-Latinx people.

Until I became more involved in activism, my white privilege left me blissfully unaware that what I experienced as a Latinx woman differed greatly from the experience of brown and Black Latinx women. I learned that “conquistador” was just a euphemism for "colonizer," meant to glorify the pursuits of Columbus & co., while whitewashing the stories of indigenous Latinx communities. My family eulogized tales of my Spanish heritage, erasing any and all traces of our Taíno ancestry.

Anti-blackness has long been perpetuated by white and white-passing Latinx people. Latin American and Caribbean history is marred by violence, brutalization, and the genocide of indigenous peoples. Systematic racism in Latin American and Hispanic countries is an omnipresent issue that remains overlooked. Even in America, many white Latinx have denied their indigenous roots, and have opted to be considered white on the census. A surprising number actively supported Donald Trump and his racist sentiments; Cuban Latinxs even helped secure his electoral win in Florida. (Though Puerto Ricans are overwhelmingly democratic, they are not allowed to vote in presidential elections because Puerto Rico is still considered a colonial territory of the United States.)

Trump's presidency has energized and emboldened racism directed towards Latinx people, especially Latinxs of color. Now, following the renouncement of DACA, it is imperative that white Latinxs use their privilege to vocally oppose the Trump administration's racist actions. For too long, white Latinxs have been complicit in white supremacy, using their heritage — the heritage of the colonizer — to excuse racist behavior.

Activists have primarily focused on dismantling white nationalist groups due to recent tragedies like Charlottesville, but white Latinx are just as culpable in racially-motivated violence as Americans with strictly European heritage. (One of the Unite the Right protestors in Charlottesville even claimed that he couldn't be racist because he was Puerto Rican.) The murder of Trayvon Martin was committed by a white-passing Latino, a fact often overlooked in remembering Martin’s death. This high profile case gave rise to the Black Lives Matter movement, and the hashtag "#blacklivesmatter" was even conceived after the acquittal of the murderer, George Zimmerman. Philando Castile, whose horrific death was livestreamed by his girlfriend Diamond Reynolds, was also shot and killed by a Latino cop named Jeronimo Yanez. Just this past summer, Muslim teenager Nabra Hassanen was murdered by a Latino named Darwin Martinez Torres while walking home from a Virginia mosque.

Being a white Latinx in America is a fundamentally different (and more privileged) experience than being a Latinx of color in America. A 2016 study on racial bias in law enforcement suggested "that the whiter one appears, the more the suspect will be protected from police force,” so Afro-Latinxs and other Latinxs of color are far more likely to endure discrimination and wrongful searches. Joe Arpaio, the ex-sheriff Trump pardoned last week, was found guilty of racially profiling Latinx people by their skin color and subjecting his detainees to abhorrent conditions. White Latinxs never have and never will experience this form of systemic racism to the same degree.

I cannot forget that only sixty years ago, my abuelos arrived as refugees in America, hoping for a better quality of life, just like many of the Dreamers who will now be displaced. Oppression is all interconnected; when white Latinx stay silent as Latinx of color are targeted, the very communities and cultures they cherish are being destroyed.

If you are white and Latinx, you can no longer hide behind your white privilege. We must stand with every Dreamer, DACA recipient, undocumented immigrant, and Afro-Latinx person until their basic human rights are not a compromise.