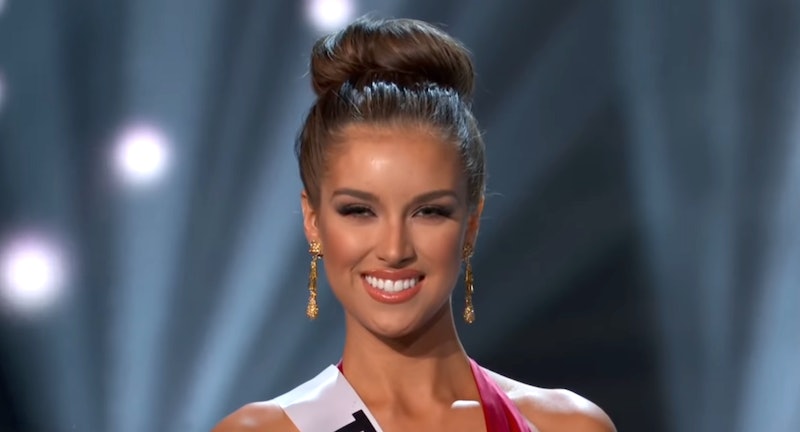 Peter didn't give her a rose at the last rose ceremony, but that doesn't mean Alayah is finished with The Bachelor. After being called fake by the other women in the mansion, Alayah returns to The Bachelor in Week 4. One reason for the fake accusations was because Alayah used to participate in pageants. Even though plenty of Bachelor contestants have a pageant past, Alayah's became the focus once Sydney claimed she acted differently when she was in front of the cameras. But, hey, the former Miss Texas USA does know how to work a camera as Alayah's pageant videos show.

Sydney's comments to Peter during the group date began the inquiry into Alayah's genuineness. Fearing he could have a situation like Hannah Brown had with Jed during The Bachelorette, Peter held a pool party to ask the other women how they felt about Alayah. Former Miss Iowa USA Kelsey told Peter how people who have participated in pageants "know how to turn it on." Lexi (notably not a pageant participant) also wondered if Alayah's pageant background influenced the way she behaved. Peter was still torn. But then Victoria P., who participated in Miss USA 2019 with Alayah, seemed to seal her fellow competitor's fate. Victoria said that Alayah had asked her to lie to producers about knowing each other and Peter sent Alayah home.

Through video and photo evidence, there's no denying that Alayah knew Victoria since they were both in the Miss USA 2019 competition on May 2, 2019.

But here are other big video moments of Alayah competing in pageants that didn't add to the Bachelor drama.

Before she represented San Antonio in Miss Texas USA, Alayah had been Miss United States 2016 (yes, that's different from Miss USA or Miss America) after winning Miss Texas United States. So, she was already a pro at strutting her stuff down the pageant runway.

Alayah wrote on the Miss Texas USA Instagram account that the on stage question segment is one of her favorite parts of pageants. She explained, "I mean, when else can I sneak in a shout out to my dog and then address a serious issue in our society all in less than 2 minutes."

At 23 years old, Alayah was crowned Miss Texas USA in September 2019. A year later, she handed the crown over to reigning Miss Texas USA Taylor Kessler.

Ahead of the Miss USA competition, Alayah showed off what she had been doing as Miss Texas USA, including her literacy advocacy.

All 51 of the Miss USAs from the 50 states and Washington, D.C., competed in the Miss USA Preliminary Competition in Reno-Tahoe on April 29, 2019.

Alayah may never look at swimwear the same way again after that failed Bachelor pool party. But in Miss USA, she confidently handled the swimsuit competition.

The preliminary competition also included the evening gown segment before there was an interview portion.

Out of the preliminary competition, only 15 women were selected to compete in Miss USA. Miss Louisiana, Victoria P., was in the top 15, but Alayah wasn't. So it was hard to spot her during the official Miss USA pageant. Yet, while her time doing pageants may be over, her time on The Bachelor isn't just yet. Ad based on previews, Alayah isn't going to help her reputation with the other women when the persistent pageant queen comes back to The Bachelor for Week 4.