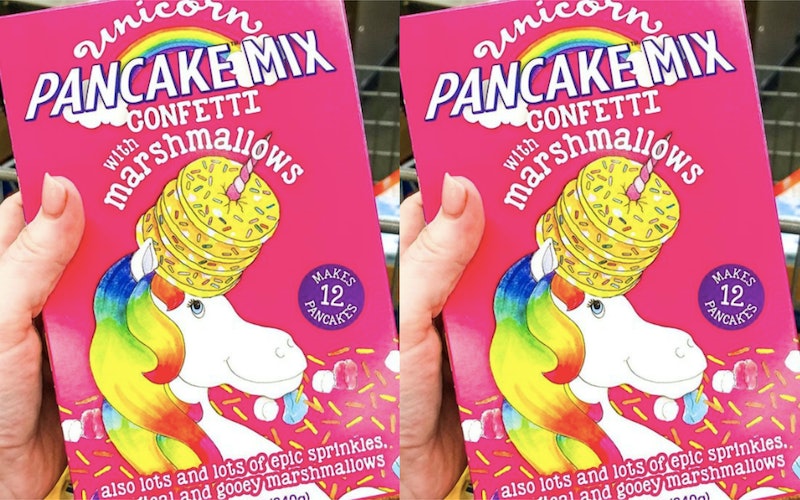 Every time I think we've reached a unicorn plateau — a place where our known universe can hold no more unicorns — I am proven wrong. Because now, the universe has looked me right in the eye and said: How does some unicorn pancake mix sound? And I ve to admit it sounds incredible. So the universe gave us the ultimate gift, in the form of Unicorn Confetti with Marshmallows Pancake Mix. Yes, it's a mouthful — a mouthful of delight, to be specific.

This delicious and slightly random treat comes from the home of delicious and slightly random treats, Aldi. It was spotted by Instagrammer @aisleofshame and looks just as over the top as you would want unicorn pancakes with marshmallows to be. The box promises “lots and lots of epic sprinkles, magical and gooey marshmallows" and it makes 12 full pancakes for just $2.99 a box. That's just about a quarter per pancake, if you're doing the math — which is, in the pancake world, quite the bargain.

If that's not enough, they're also offering Galaxy Blueberry with Marshmallows Pancake Mix, which comes with COSMIC sprinkles. How do cosmic sprinkles differ from epic sprinkles? Well, I suggest you buy both and compare. The Galaxy Blueberry option has an adorable/slightly evil-looking alien on the front and looks like it takes the classic blueberry pancakes to new heights. Again, it's only $2.99 for a box that makes 12 — not too shabby at all.

If you're not already a fan of Aldi, it's time to get on board — because this grocery store is full of surprises and wonders, from old favorites to things you never knew you needed. From humane spider catchers that will let you get rid of creepy crawlers without hurting them to a dinosaur sprinkler which is, well, just what it sounds like, they have so much on offer.

And it's not just about pool floats and random accessories, they also keep upping their deliciousness game. Their Chocolate-Filled Belgian Waffles are an inspired creation designed to be kept in the freezer, for those difficult moments where you want to feel classy but also covered in chocolate. The Aldi Mango Mimosa Bottles transformed this summer — along with their favorite, the Aldi Pineapple Mimosa Bottles — by providing the brunch classic in an easy, ready-to-use bottle. They even got in early on the hard seltzer game, releasing Vista Bay Hard Seltzers earlier this year. So while I'm delighted to see something as creative and amazing as the Unicorn Confetti with Marshmallows Pancake Mix, I can't say I'm surprised. Aldi gets it done.

Are you feeling more Unicorn Confetti or more Galaxy Blueberry? The answer is clear, because blueberries are overrated and have no place in pastry (don't @ me) — and unicorns are magical creatures here to deliver millennial-approved baked goods in every shape and form. But the choice is yours. A box of 12 should be enough to share with friends or have one epic brunch that you make all for yourself — I'm not going to tell you how to live your life. Let the marshmallow, sprinkle-filled pancakes transport to you a better, simpler time. That's what they're there for.