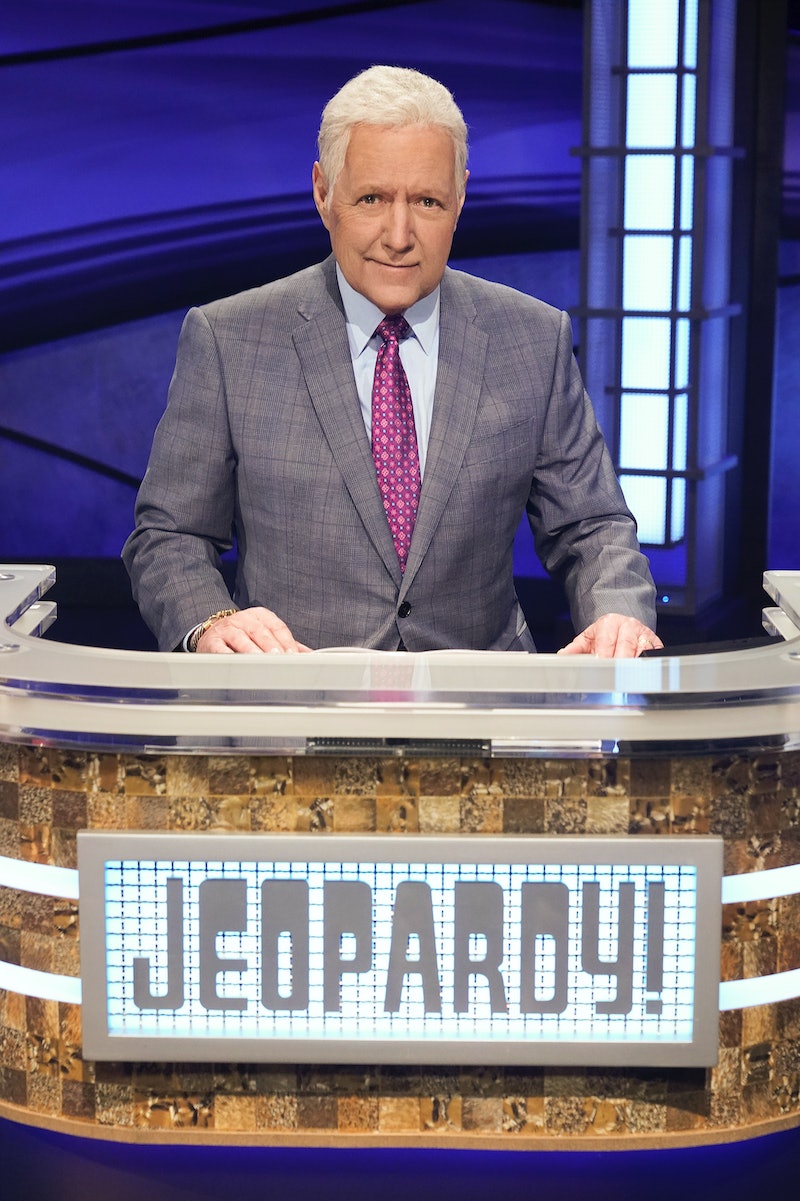 On Wednesday, March 4, Alex Trebek gave a one-year cancer update in a video tweeted by Jeopardy, almost one year exactly since announcing his Stage 4 pancreatic cancer diagnosis. To celebrate the milestone, the longtime Jeopardy host opened up about the struggles of the past year. And though he admitted that, at times, it was hard to hang onto hope, he wants to encourage other cancer patients to keep fighting.

As Trebek noted in the video, the one-year survival rate for Stage 4 pancreatic cancer is only 18%. And the 79-year-old has fought hard to be in that group. "Now I'd be lying if I said the journey had been an easy one," he said. "There were some good days, but a lot of not so good days. I joked with friends that the cancer won't kill me, the chemo treatments will."

But, on days when he felt like giving up, Trebek reminded himself that it would've been a "betrayal" to his wife, other cancer patients, his faith in God, and the many prayers that have been sent his way. So, now the television host is using his one-year update as a way to encourage others battling the disease alongside him to never stop fighting. "And you know something, if I, no, if we — because so many of us are involved in this same situation — if we take it just one day at a time, with a positive attitude, anything is possible," he said.

On March 6, 2019, Trebek revealed his cancer battle publicly. At the time, he tried to remain positive, telling fans, "And with the love and support of my family and friends and with the help of your prayers also, I plan to beat the low survival rate statistics for this disease." And here he is one year later.

Two months after his announcement, Trebek revealed he was in "near remission." The great news was unfortunately followed by Trebek announcing he was undergoing chemotherapy again in September of 2019. Despite the many ups and downs, however, he continues to push forward. He also doesn't plan on retiring from Jeopardy just yet, especially since he's under contract for three more years. And, as he said in his one-year cancer update, he plans on delivering a similar message 12 months from now.

More like this
Ashton Kutcher Wants Danny Masterson “To Be Found Innocent” In Rape Retrial
By Jake Viswanath
The Jonas Brothers' New Album Has A Very Meta Name
By Alyssa Lapid
Brad Pitt Wants To Share The Spotlight With This Celeb In Shania Twain’s “That Don't Impress Me Much”
By Alyssa Lapid
Cruz Beckham Teased New Music With An Adorable Nod To Mom Victoria Beckham
By Stephanie Topacio Long
Get Even More From Bustle — Sign Up For The Newsletter
From hair trends to relationship advice, our daily newsletter has everything you need to sound like a person who’s on TikTok, even if you aren’t.