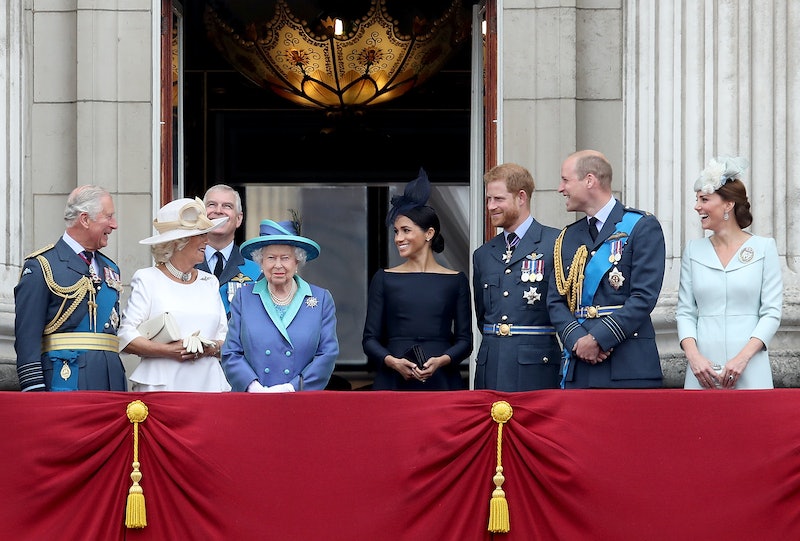 Ever since Meghan Markle became part of the British royal family, style lovers have been over the moon every time she breaks a rumored fashion rule. From nail polish to sandals, people love rebellious style. With the holiday season here, these are all the outfit rules the royal family has to follow for Christmas Mass. Will Markle break a rule? Will Kate Middleton follow her lead? To be one of the first to know, you'll need to actually know what some of the rumored rules actually are.

Of course, thanks to the most recent royal weddings of Prince Harry and Markle and Princess Eugenie and Jack Brooksbank, the rules of attending royal functions are must more well-known at the moment. From whether or not tights are required to if you always need to wear nude colored nail polish a la the queen's favorite color, there are some rumored must-dos for events, but are the rules more strict for the family's traditional Christmas Mass?

Here's the thing to know about the royal dress code. There's no book or instruction list that the family makes public. There are royal etiquette experts and commonly noticed patterns, but there's no true manual you can follow if you're ever invited to a Christmas Mass.

Thanks to these royal style experts and those familiar with British royal etiquette, you can piece together what some of the outfit rules are for the royal family at Christmas Mass. Honestly, they aren't really that intense. Considering that this is a religious event, the dress code shouldn't be too shocking to those who have attended holiday services in their own lives.

What are some of the most commonly believed rules?

The royal family is known for their hats. Think back to Princesses Beatrice and Eugenie's headwear to Kate Middleton and Prince William's wedding. According to InStyle, it's a tradition that women do not appear in public without a hat, and while the Queen continues the tradition, the women in the family simply seem to wear hats just to official royal family events and church. Kate Middleton, however, did go without headwear in 2016 proving that this rule isn't hard and fast.

While Cosmopolitan reports that royals often travel with black ensembles in case of a family death, black is typically not worn to royal functions that occur during the day according to InStyle. That means you probably won't be seeing any of the royal family wearing black to Christmas Mass.

This is a rule that's fairly well known thanks to the two royal weddings this year. Queen Elizabeth has long been a fan of Essie's Ballet Slippers, and it's encouraged for royal women not to wear dark or bright polish but stick to neutrals. Recently, however, Meghan Markle broke this rule, but in general, it's followed pretty closely.

While royal family members like Kate Middleton and Meghan Markle will break this rule at more casual events (like Markle at the Invictus Games), for formal events like church, pants are a no-go. Don't expect a great pair of trousers for Christmas Mass.

While it can be difficult to tell when the royal women are wearing panty house, according to Cosmopolitan, it's highly encouraged that the ladies wear them to royal functions.

Coats Remain On In Public

At royal events and functions, the Queen and Duchesses will leave their coats on in public. Apparently, removing a coat is seen as unladylike.

While not required, British designers are apparently encouraged. Princess Eugenie and Meghan Markle both chose designers with British roots. Peter Pilotto, the designer behind Princess Eugenie's dress, is based in the UK, and while Meghan Markle's dress was Givenchy, it was by designer Clare Waight Keller who is British. Then, of course, there's Kate Middleton's love of designer Jenny Packham.

While there are other rules such as not going sleeveless, it's unlikely that any member of the royal family really wants to rock bare arms in late December. These royal family fashion rules are what you'll more than likely see being followed at Christmas Mass, but hey, there's always hope for some rebellion.