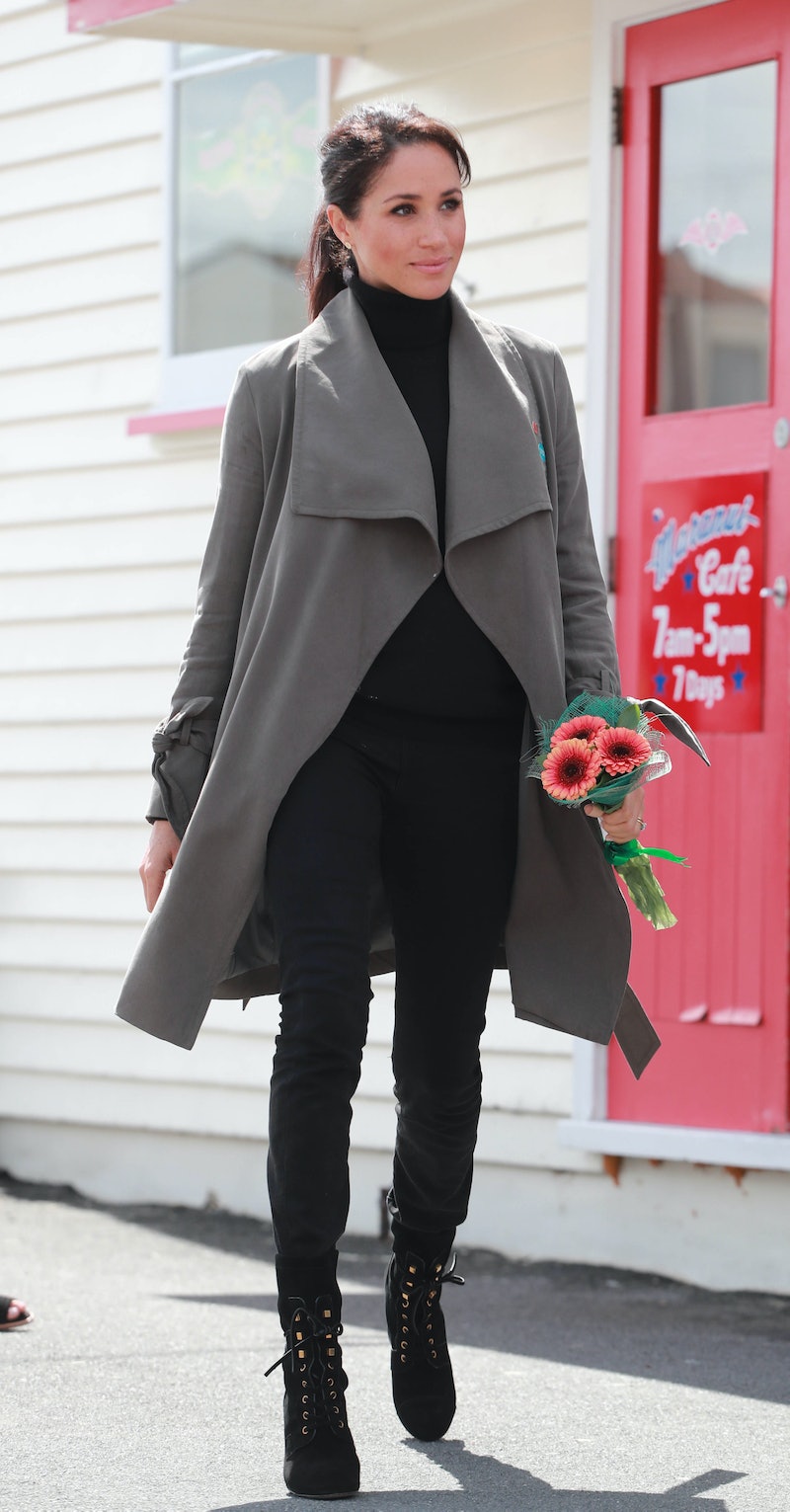 The Duchess of Sussex was already well on her way to fashion icon status when she married into the royal family and became one of the most visible women in the world. But everything Meghan Markle wore in New Zealand has basically cemented that position. Markle has reached a sartorial summit during her trip to Australia, Fiji, and beyond with Prince Harry.

She has performed royal duties and attended functions in pitch perfect ensembles — all while newly-pregnant and expecting her first child.

During the overall trip, Markle has worn luxe brands like Stella McCartney and more accessible and affordable pieces by Club Monaco and J. Crew. Markle has demonstrated a predilection for navy blue dresses, for black skinny jeans, and for twinning with her handsome husband. She also slayed a gothic bird dress by Oscar de la Renta — which was unlike anything she has ever worn before.

Markle's ensembles and multiple OOTDs have been fashion high water marks for her. She has looked absolutely fantastic while Down Under.

The Duchess and Prince Harry have spent the final few days of their royal tour in New Zealand. Markle wore her first maternity dress — a Zara piece under $60 — and resurrected a royal blue Antonio Berardi dress she was previously seen in back in 2017.

It's been hit after hit after when it comes to her style.

Here's everything Markle has worn during her time in New Zealand — all of which remind us of why we remain royally fashion-ated, er, fascinated by her.

Markle did not just bring back a dress she wore before. She brought back the mullet hem with her high-low Antonio Berardi Navy Double Breasted Dress. The sophisticated frock is nearly $2,700 and is currently sold out, according to Meghan's Fashion. The sleeveless dress showed just enough of her arms and legs.

The mom-to-be and her baby bump were chicly dressed in this cream-colored Brandon Maxwell midi dress. She added a sold-out beige Burberry trench and matching heels. It was an anything-but-boring execution of neutrals.

For the Welly wanging contest where players toss a Wellington boot as far as possible, Markle wore a waterproof black jacket that is not available for purchase. She paired it with J. Crew skinny jeans in a charcoal hue. She wore J. Crew's black suede ankle booties earlier this month and revisited the basics brand with her $128 pants.

High-rise, charcoal wash jeans were how Meghan Markle did casual while in New Zealand.

The Duchess looked cool and comfortable in this white tuxedo dress by Maggie Marilyn. The pockets were a fun touch, as were the blue Manolo Blahnik heels she has been rocking throughout the trip.

While Markle's dress was sleeveless, this version has long sleeves. It can be dressed up or down. At $650, the price might seem steep. But it's an investment piece that can be worn for seasons and years.

Markle has proven to be a Club Monaco loyalist, having worn the brand many times. The sold-out Ellayne trench was a soft contrast to her black skinny Outland jeans and sweater.

Markle wore a black suede pair of these boots. Overall, though, the shoe is all about the details, like the gold hardware and laces.

Markle wore this empire-waisted Zara mini maternity dress that's just $56 as her first maternity dress in public. The roomy and comfy-looking frock is currently sold out on the fast fashion retailer's site.

Markle wore this deceptively simple, cap-sleeved, A-line silk and wool dress by Gabriela Hearst while giving a speech. It was a chic and classic moment for her.

Meghan's Fashion reports that these are Givenchy separates —a knit top and a bespoke, black and blue pleated skirt.

While strolling hand-in-hand with Prince Harry during the Redwoods Tree Walk in Rotorua for the final day of the royal tour, Markle opted for a casual and utilitarian look. She once again rocked black skinnies, which may have been by Outland. She appears to have borrowed the puffy black down jacket from her hubby, according to The Daily Mail. Because #twinning.

This dark dress is believed to be a bespoke Stella McCartney crepe dress that looked utterly terrific on her.

Markle and Harry's royal tour of Australia, Fiji, and New Zealand has found them visiting lots of historically and culturally significant places and meeting a variety of people. It has also found Markle upping her style game at every event and function.