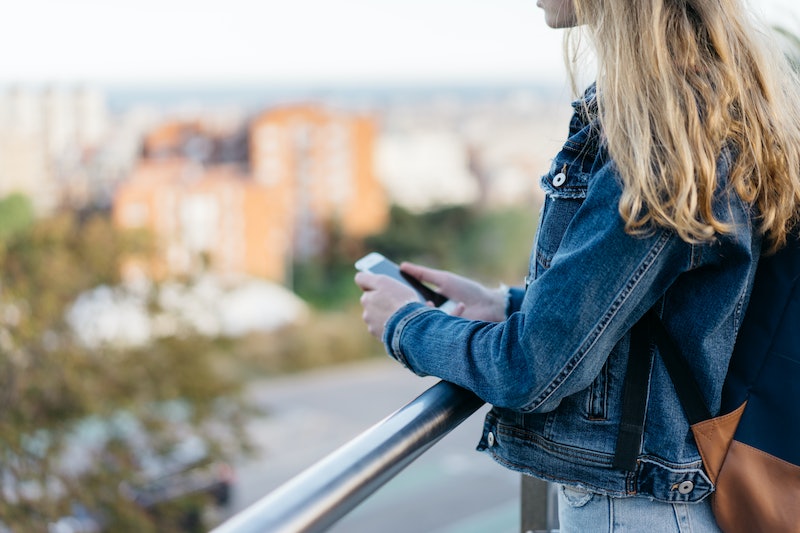 Of all the annoying dating habits folks have developed over the years, breadcrumbing is possibly one of the most painful and confusing. If someone is breadcrumbing you, they'll likely pop up at odd intervals to say hi and express their interest, only to disappear again shortly thereafter. It's like ghosting, but it's long and drawn out. And it just keeps happening.

In short, "breadcrumbing is a way of stringing a person along using text and social media," Elisa Robyn, Ph.D., a relationship expert with a background in psychology, tells Bustle. "You might have had a few dates, or even been a bit serious, and then you wonder if you have been ghosted."

But rather than straight-up disappearing, you might receive a random text message, a like on your Instagram photo, or perhaps a few phone calls here and there, Robyn says. It'll seem like they're making just enough of an effort to keep you in their life, without ever truly committing or taking things to the next level.

"The notes are fun and perhaps a bit sexy, and then they stop again," she says. "You might schedule a few dates, but for some reason, they are always canceled and followed by a short text. You feel like you are following a trail of breadcrumbs, that someone is leading you on." And you may very well be right.

So why does it happen? On one end of the spectrum, this breadcrumber may be attempting to let you down softly, Robyn says. Instead of being honest, or ghosting you, they choose to send sporadic texts, essentially letting the relationship die a slow and painful death. For them, it isn't going anywhere and they know it, but they don't ever do you the favor of saying so.

That said, they very well could be interested, but aren't quite sure what to do or say next, hence all the confusing texts. "They are still 'testing the waters' in the relationship and want some space to do this," Dr. Marni Feuerman, LCSW, LMFT, an author and licensed psychotherapist, tells Bustle. In this situation, you may have chatted about starting a relationship, but they are taking their sweet time, and stringing you on in the process.

Unfortunately, breadcrumbing can also be a sign someone is still in a relationship, and are texting you just for fun. "Often breadcrumbers are in a relationship they find unsatisfying and hope to enliven their life," Robyn says, usually by sending flirty texts. They may take comfort in knowing you're there, should they ever decide to call their current relationship quits.

When that's the case, these messages might even be a way for them to feel better about themselves. For example, if they get rejected by their partner or have an argument, they might reach out to you as a way to boost their ego, Caroline Madden, Ph.D., an author and licensed marriage and family therapist, tells Bustle. They know you'll text back and distract them, but it will never really be more than that.

There's no denying breadcrumbing can be incredibly unfair, so the more you can do to detect it early and cut things off before it gets to you, the better. While it can be tricky to spot, it can help to "watch for a pattern of canceled dates followed by several text messages and then silence," Robyn says. "There will be just enough communication to keep you confused."

If you notice these signs, "there are two options," she says. "The first is to address this head-on and ask the person if they want to have a relationship with you or not." Depending on how they respond, you can decide if you're willing to wait and see where things go, or make a clean break and officially move on.

"Your second option is to block them on all your accounts and leave this unsatisfactory situation behind you," Robyn says. If it isn't working out, or you don't like how this person is making you feel, call it off. Don't text back. Block them on social media. Do whatever you need to do to move on, and protect yourself. Because nobody needs to be strung along.