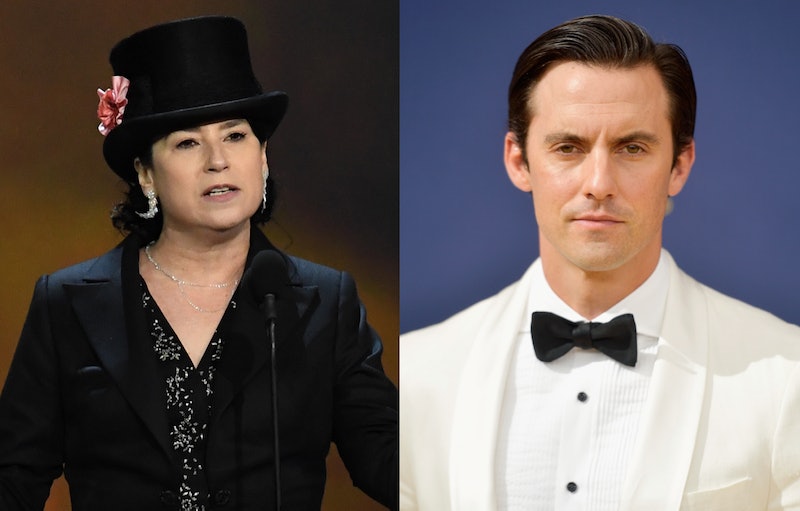 The stars were out at the 2018 Emmys, and the event served as a reunion of sorts for a few former residents of the fictional — and now appropriately named —  town of Stars Hollow. When asked by Us Weekly if she'd run into any fellow Gilmore Girls alum at the event, Amy Sherman-Palladino's comments about Milo Ventimiglia proved that their bond is still strong.

Sherman-Palladino — whose new series, The Marvelous Mrs. Maisel, won big on Monday night — created the beloved Gilmore Girls back in 2000. Among the many memorable actors that worked on the series were Alexis Bledel (who played Rory Gilmore) and Ventimiglia (who played Jess Mariano) — both of whom were up for awards last night as well.

Bledel was nominated for her role as Ofglen on The Handmaid's Tale, but Sherman-Palladino said she'd yet to cross paths with her famous friend. "Alexis and I usually hook up in the ladies’ room, and I didn’t go to the ladies’ room that much in this," the director told Us Weekly.

She did, however, manage to connect with Ventimiglia, who was nominated for his role as Jack Pearson on This Is Us. When Us Weekly revealed to Sherman-Palladino that Ventimiglia had told reporters he was "very proud" of her success at the Emmys, she and her husband Daniel replied, "and it goes for us too [for his]."

The couple's pride for Ventimiglia goes deeper than just that, though. According to Sherman-Palladino, she and her husband pretty much consider the actor to be an honorary part of their family. She explained to Us Weekly,

"We call him our imaginary son because I always said that if I can be guaranteed that I would have a son that was Milo, then I would have done it. But since I can’t be guaranteed that, we have just adopted Milo. So it’s easier, and we don’t have to put him through college or pay for anything at all. Every now and then, we take him to dinner and make sure he’s wearing a sweater and that’s all we have to do."

Ventimiglia is currently 41 years old, so it's pretty funny to imagine the Palladinos checking in on him to make sure he's dressed appropriately for the weather. It's safe to assume they were kidding about doing that in present day, but Ventimiglia was just 24 when he first landed in Stars Hollow. He wasn't super well-known back then, either, so it's totally possible that the Palladinos assumed a parental-type position for him on-set.

This isn't the first time the former coworkers have gushed about their long-standing relationship, though. When Netflix decided to reboot Gilmore Girls back in 2016, Ventimiglia said he was more than thrilled to reconnect with his friends from the series.

"[The Palladinos] said, ‘Hey, we’re doing this, we’d love to have you. Do you want to be a part of it?' And I think everyone answered yes. Everyone," he told Entertainment Weekly in 2016. "And they got everyone. I stayed close with Dan and Amy [Palladino] for years, and to me, I was like, ‘Yeah, of course I’ll be there. Absolutely. I don’t care if I’m doing a movie in Tunisia, if I’m filming Star Wars wherever, I will show up for this, because I care about it.'"

Aww. Now that's commitment right there. Ventimiglia's relationship with the Palladinos clearly goes beyond having just been former coworkers, and it's nice to see that they've stayed so close after all these years.