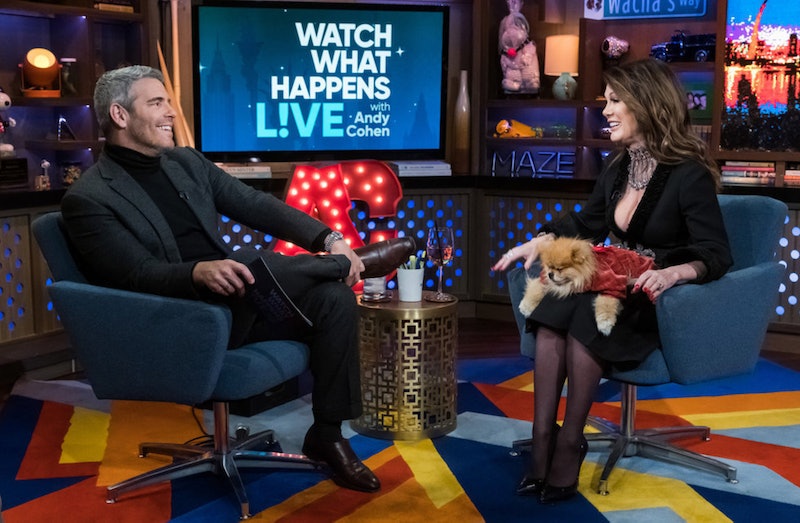 Much like the rest of us, the King of Bravo is bummed that The Real Housewives of Beverly Hills' Queen of Diamonds chose to skip Ye Olde Reunion. In a recent interview with E! News, Andy Cohen said he wishes Lisa Vanderpump was at the RHOBH reunion because, as he put it, "It's hard because her voice isn't being heard. I think it was important to hear from her.” But rather than let her voice be heard at the reunion and air out her grievances, she chose to ditch the event altogether. It was a Sexy Unique No Call, No Show.

E! News then asked the late-night host if he might sit down with LVP at some point down the road so she can share her side of the story, à la that one-on-one interview with Luann de Lesseps that was filmed at her Sag Harbor home in 2017. Cohen did not seem too optimistic. “No, I don’t think so,” he shrugged. "I think [the reunion is] the place to do it." He also went on to say that he believes that if LVP had gone to the reunion, then she and Kyle Richards "maybe would've been able to work through some stuff."

You know the story like the back of your paw by now, but here it is one more time for good measure: RHOBH veteran Lisa Vanderpump stopped filming with the rest of the cast in the middle of Season 9, leaving a messy feud involving a rescue dog named Lucy Lucy Apple Juice, RadarOnline, Dorit Kemsley, Kyle Richards, and Teddi Mellencamp totally unresolved. We spent weeks wringing our hands over whether or not she would reunite with her costars at the Season 9 reunion, and earlier this month we got our answer: As E! News noted, Cohen revealed to Anderson Cooper on Instagram that LVP did not go to the taping of the cast’s post-season gathering. For the first time ever, Lisa Vanderpump skipped a Real Housewives of Beverly Hills reunion. Oh, and she also quit the series.

A few days after LVP did not turn up for the reunion, Cohen talked about it on his SiriusXM show. He said,

The Season 9 reunion was missing the person who was smack dab in the middle of the biggest storyline of the season, but it sure sounds like the other RHOBH stars found plenty of stuff to chat about. RHOBH veteran Kyle Richards recently told Entertainment Tonight that it was “the longest reunion we’ve ever shot.” She continued,

“It’s not fun to do that. And even though there's a lot of women that are getting along and are very close right now, there's also a lot of other stuff going on, obviously. So, no one wants to relive it."

If this was the longest RHOBH reunion without LVP, I don’t even want to try to imagine how long it would’ve been if the person who was at the center of Puppygate was there, too.