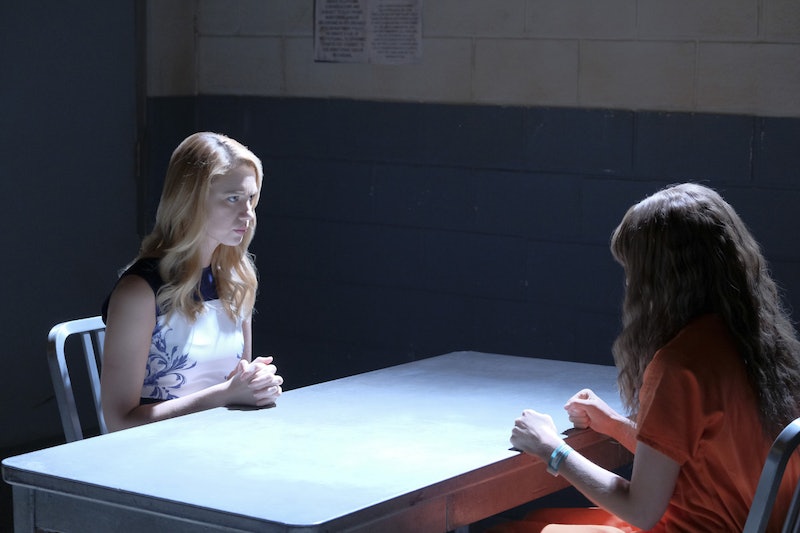 While the saying goes, "Hell hath no fury like a woman scorned," Jane the Virgin is proving that it should be revised to, "Hell hath no fury like sisters betrayed." That's because — thanks to some ride sharing — Anezka and Luisa have teamed up on Jane the Virgin. The sisters of Petra and Rafael, respectively, learn in the Season 3 finale that their siblings have been betraying them and so they join forces. This is bad for both Petra and Rafael, but worse for Petra since while Luisa knows about Emilio Solano's will that says Rafael is entitled to nothing, Anezka is holding a gun to Petra's head. So will Anezka kill Petra on Jane the Virgin Season 4? Fans will have to wait months to find out the fate of this "beautiful sister."

Even though Petra's actions directly led to the demise of Anezka's husband Scott, I'm not sure a bullet to the head is warranted. Considering that Anezka spent a significant time keeping Petra in a coma and impersonating her, I still don't think these twin sisters are quite even — especially since Petra didn't do anything to intentionally kill Scott. Yet, once Luisa reveals to Anezka that Petra most likely drugged her to break her and Scott up, she is furious. She steals Rafael's phone, toys with Petra's emotions, and then holds her at gunpoint.

Luisa having dirt on Rafael isn't good news either and I expected her to turn bad once she found out Rafael lied about having cancer to set her and Rose up. But compared to Petra's situation, Rafael has it easy. (Plus, who else is excited to see a non-wealthy Rafael?) Yet, Yael Grobglas as Petra is such an integral part of the cast, I would be shocked if Anezka actually went through with it — just as shocked as I would have been if the Jane the Virgin Season 3 finale didn't end with a character in mortal peril. So while I'm not certain if Petra will get out of this mess on her own or with some help (perhaps Chuck will come to her rescue?), Petra has survived time and time again and this should be no exception. But even if she lives to see Season 4 — which I fully expect her to — prepare yourself for the fact that Petra and Rafael's scheming against their siblings will have major repercussions when the show returns.