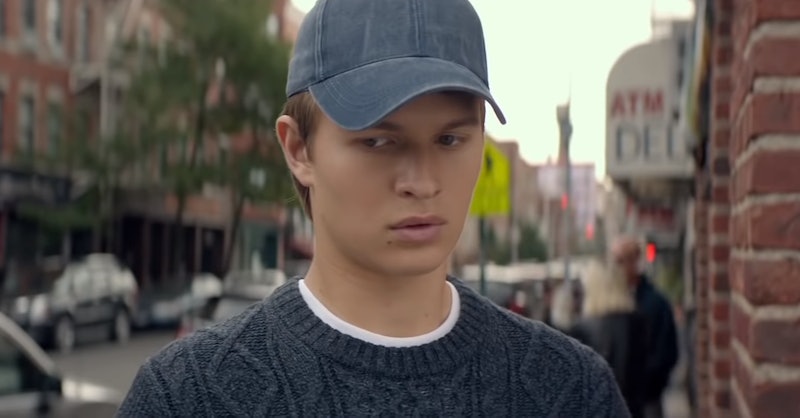 Just in case you never want to sleep again, the Jonathan trailer starring Ansel Elgort has arrived. The upcoming sci-fi movie has shades of Dr. Jekyll and Mr. Hyde (or, if you want a more current reference, Fight Club), with Elgort taking on the dual role of brothers, Jonathan and John. There's a catch though, both brothers inhabit the same body through a phenomenon that the trailer describes as "single body multi-consciousness."

Jonathan and John appear to have a fairly well-honed system in place — Jonathan comes out during the day, John at night — until John begins dating someone. As the "good" brother reveals, dating is against the rules, and things get tense once Jonathan becomes close to the woman John's been seeing. Actually, tense might be an understatement, since he appears to begin struggling for complete control of his brother's consciousness. Whatever is going on, it's unsettling, but it also gives Elgort a chance to show off his range as he plays up the night and day differences between the brothers.

Elgort is no doubt the star here thanks to the challenges inherit in playing two characters at once, but the movie has a terrific cast all around. Patricia Clarkson is playing the doctor in charge of the brothers' unusual case, while Matt Bomer plays Ross, a friend of Jonathan's, and Suki Waterhouse plays John's girlfriend. As reported by Variety, the indie movie was picked up for U.S. distribution in September, and it's set to premiere in theaters and on demand Nov. 16.

The movie's premiere couldn't come at a better time since Elgort is having a bit of a moment right now. He's set to followup his breakout role in Baby Driver with the highly anticipated film The Goldfinch, an adaptation of the Pulitzer Prize winning novel of the same name. It was also recently announced that Elgort nabbed the iconic role of Tony in Steven Spielberg's remake of West Side Story.

Since both The Goldfinch and West Side Story are set to be high profile films, it could be interesting to see Elgort taking on a smaller film that's resting so firmly on his shoulders. A movie like Jonathan's success depends on how convincingly the lead can differentiate between the look-alike characters. From the trailer alone, it looks like the Baby Driver star is doing an excellent job.

The scenes where Jonathan appears to record conversations with John are particularly intense, and they only become more so when it's revealed that Jonathan is now seeing John's girlfriend. There's no doubt that the movie is high concept, but it appears to be grounding its sci-fi storytelling with a tale about jealousy and the struggle for control. It's clear by the end of the teaser that these two brothers aren't as content with their arrangement as they were pretending to be.

Moviegoers will have to wait until November to see how the story plays out, but the trailer is promising. And right now, any project with Elgort attached is automatically intriguing — especially one that makes the prospect of closing your eyes downright terrifying.