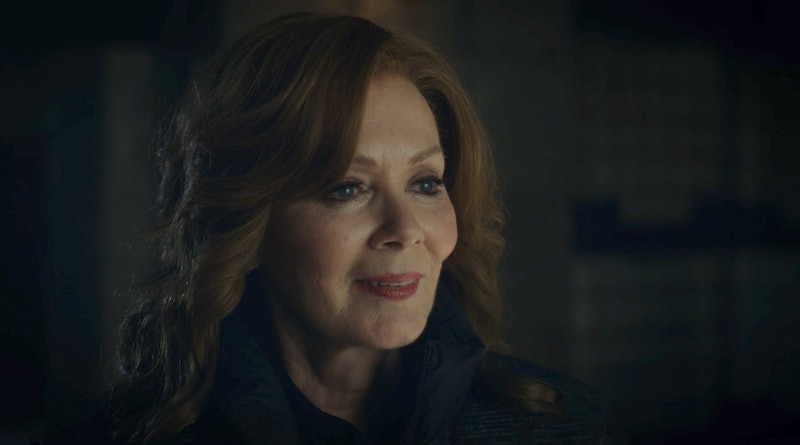 Spoilers ahead for the Watchmen Season 1 finale. The Watchmen HBO adaptation might not have featured Dan Dreiberg from the original comics, but Night Owl II's former ride got a major shoutout in the finale. Archie in Watchmen was the ship of Dreiberg's vigilante persona Nite Owl II. After Dr. Manhattan had teleported them to Karnak, Adrian Veidt offered Laurie Blake and Wade Tillman the airship to make their way back home from Antarctica. Laurie looked happy to see Archie and that's because she's always been a fan of her ex's owlship.

Before it appeared in the finale, fans thought they spotted Archie during the very first episode of Watchmen. The ship the Tulsa police used to attack the 7th Kalvary at the cattle ranch bore a striking resemblance to Dan's ship. But showrunner Damon Lindelof clarified in interviews at the time what Veidt revealed in the finale episode. "That technology that Dan used to make Archie has now been appropriated by law enforcement and, instead of using helicopters, they've used the Archie design to make these airships," Lindelof told IGN. He also teased that while Dan wouldn't be on his series, Archie could make an appearance — and he made good on that promise in "See How They Fly."

In "Chapter VII" of the original Watchmen comic, Dan gave Laurie a tour of his ship. While she was masked crimefighter herself as Silk Spectre II, Laurie was impressed with the technology Dan had incorporated into the ship, like its flamethrower, air-to-air missiles, radiation shields, fogscreens, and PA system. Its smooth design also allowed it to be undetected by radar. A fan of both birds and mythology, Dan explained he named the ship after Merlin's pet owl Archimedes — Archie for short — which he learned about as a child when he saw Disney's The Sword in the Stone.

Archie is particularly meaningful when it comes to Laurie and Dan's romantic relationship. After years of being in superhero retirement, they decided to brush off their vigilante suits and save people from a burning building. Immediately afterward, the two of them had sex for the first time on the ship. Unfortunately, this moment between Dan and Laurie has been ridiculed in more recent years because of its depiction in the 2009 movie version of Watchmen. Paste Magazine dubbed the scene between Patrick Wilson's Dan Dreiberg and Malin Akerman's Laurie Juspeczyk as "one of the worst cinematic sex scenes of all time," in large part thanks to the unfortunate use of the flamethrower at the end.

Even if the 2009 movie hurt Archie's reputation a bit, Jean Smart's Laurie clearly has fond memories of the ship — which is truly saying something considering how jaded she had become. As for how Archie ended up in Antarctica, Dan and Rorschach had taken the owlship to Veidt's lair in the comics back in 1985. They crash-landed about 20 miles away from Karnak, but when they got to Ozymandias they learned of his plot to drop a giant squid in New York City to stop nuclear war.

The comics don't explain how Dan and Laurie make it back to the U.S. from Karnak. (Laurie had traveled there via teleportation courtesy of Dr. Manhattan and Rorschach didn't need transportation since Dr. Manhattan killed him.) But they evidently made it without Archie and continued to be costumed adventurers until they were finally caught by law enforcement in 1995.

Even if Dr. Manhattan was Laurie's favorite ex, her pet owl and fondness for Archie some 35 years later show that she still has a soft spot for Dan. While he's stuck in prison for being a vigilante, maybe Laurie would advocate for his release if there's a Watchmen Season 2. After all, she had a change of heart about Veidt in the finale and she just might want the Night Owl to be reunited with his ship.