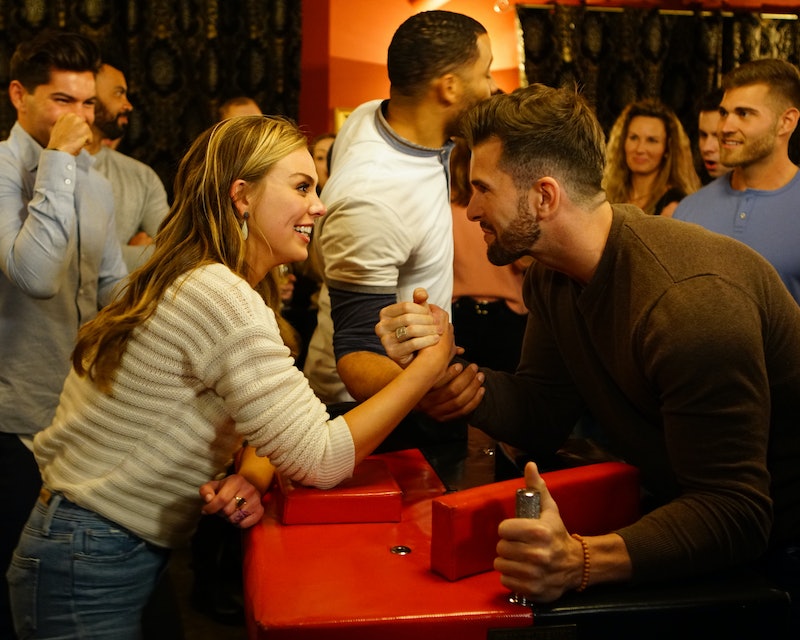 With only four men left on The Bachelorette, it's time to start hedging bets about who Hannah will end up with. Based on promos for the rest of the season, it seems like Luke P.'s time on the show will soon be coming to an end, but what about the other three men? Are Hannah and Jed engaged? Is it her and Tyler C.? Could it be Peter? Is she with anyone?

Offscreen drama aside, Jed seems like the most likely contender. Outside of all of Luke P.'s shouting, this season has been quiet, which means we've gotten to see Jed and Hannah fall for each other hard. He leans on the singing thing a bit too much sometimes, and in the real world, you're not going to win the "you didn't empty the dishwasher again" argument by busting out your guitar, but this is just the beginning of their relationship. The honeymoon phase, if you will. So for now, all of that serenading is appropriate. Plus, Jed and Hannah get along really well, they have great chemistry, and they seem to share the same values. But there's one thing that may pose an issue: Jed's career.

Early on, Jed admitted to Hannah that he initially signed up forThe Bachelorette to promote his music, and that's fair. It would be naive to think people aren't going on the show with a different agenda than falling in love with a stranger in a few weeks, and Hannah seemed to find it refreshing that Jed was honest about it. He wasn't expecting to develop feelings for Hannah along the way, but after their first one-on-one, he affirmed that he'd be there for her from then on out.

Still, that doesn't mean he's not thinking about his career, too. During Jed's hometown date, his family asked Hannah repeatedly if she would be OK if Jed's career takes off. Hannah said she would, but that will have to be something they navigate as it goes.

Hannah also hasn't even confirmed that she's engaged right now. In fact, she's been downright cagey about it, telling Entertainment Tonight that she was "happy" but that the whole experience was really difficult. "I knew it was going to be hard, but not as hard as it was," she said. "You think it's gonna hit one part where it's like, 'OK, that was the hardest thing.' And then it's like, 'OK, again? When is it gonna get easier?'"

Of course, none of this means that Jed and Hannah aren't together. They're definitely one of the strongest matches on her season, and honestly, it wouldn't be the worst thing if Jed and Hannah are still together and dating, but not engaged. They could be following in the footsteps of Cassie and Colton, and that's fine. Both Hannah and Jed are young and have plenty of time to spend with each other, so if it is them at the end, let them take it slow and see how things go.

More like this
Hannah Ann Got Engaged 3 Years After 'The Bachelor' & The Proposal Was Dreamy
By Grace Wehniainen
Kaitlyn Bristowe Said Chris Harrison Ignored Her After Her 'Bachelorette' Hosting Gig
By Grace Wehniainen
Rachel Responded To 'Bachelor' Fan Theories About Her TikTok With Clayton
By Grace Wehniainen
Zach Addressed His "Boring Bachelor Energy" After His Group Date With Latto
By Grace Wehniainen
Get Even More From Bustle — Sign Up For The Newsletter
From hair trends to relationship advice, our daily newsletter has everything you need to sound like a person who’s on TikTok, even if you aren’t.