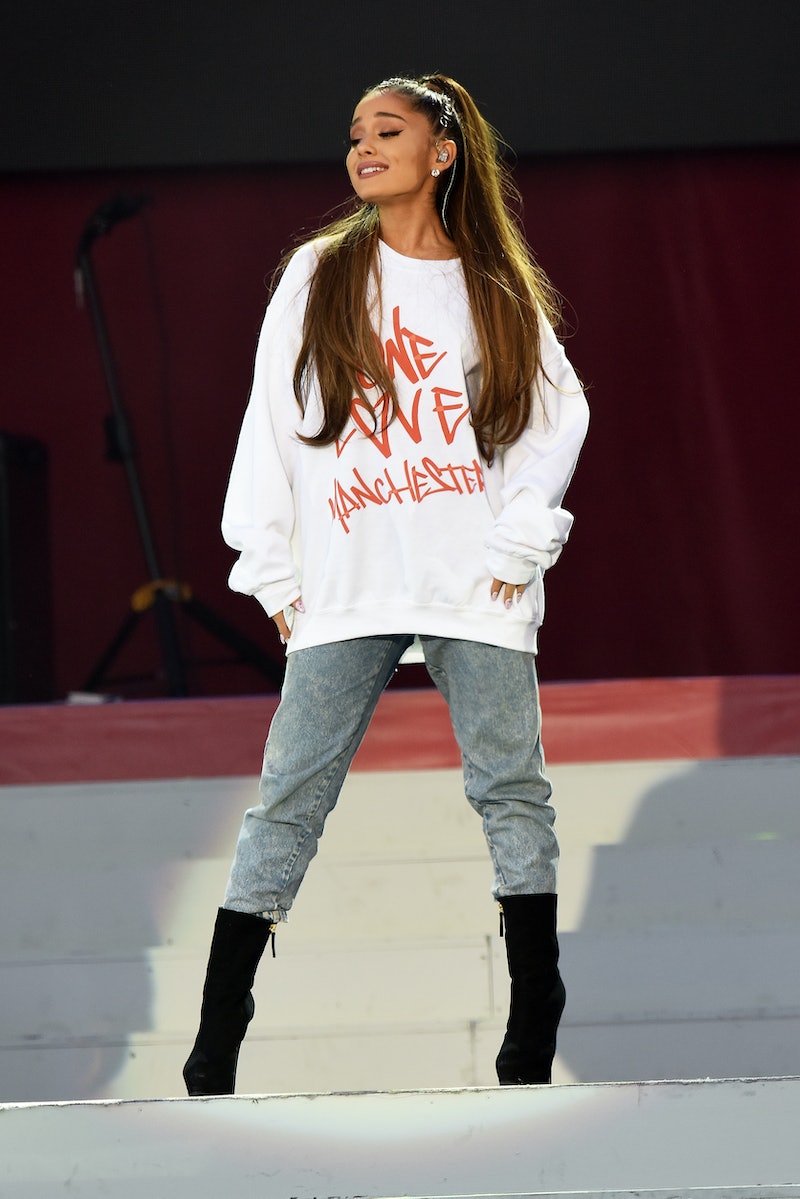 Just days after her emotional return for the One Love Manchester benefit concert, Ariana Grande is resuming her Dangerous Woman Tour. The singer took to Instagram to pen a moving note to her fans and crew, and to once again pay tribute to the 22 people who were killed in the May 22 terrorist attack outside of her Manchester show. Grande wrote,

"First show back tonight. Thinking of our angels every step of the way. I love you with all my heart. Grateful for and incredibly proud of my band, dancers and entire crew. I love you I love you."

The 23-year-old's first show back will take place in Paris, France. She briefly suspended her tour in order to pay her respects to those who were affected by the attack. Throughout everything, the singer has seemed passionate about doing whatever she could to help the city begin to recover after such a shocking tragedy.

On Sunday, June 4, the "One Last Time" singer brought together a wide range of artists including Miley Cyrus, Coldplay, and Pharrell Williams to celebrate the strength of the city of Manchester, and to raise money for the victims. The three-hour concert was a beautiful display of love and strength in the face of overwhelming loss, and Grande headed the event up with grace and the positive energy.

During the One Love Manchester concert, Grande gave a moving speech celebrating the unity on display. She said,

"I want to thank you so much for coming together and being so loving and strong and unified. I love you guys so much, and I think that the kind of love and unity that you're displaying is the medicine that the world really needs right now."

Seeing the singer continue her tour is just one more way the artist is helping her fans, especially those who were in attendance at her Manchester concert, heal. Rather than let fear rule her actions, she's continuing to lead by example by spreading love, hope, and art around the world. Since the May 22 attack, Grande has shown nothing but compassion and strength, and she continues to do so as she prepares to take the stage in Paris.

I'm wishing her all the best as she heads back out on her world tour, and I'm sure her fans are all rooting for her too.

More like this
Two UK Cities Are Now In The Running To Host Eurovision 2023
By Sam Ramsden and Rachel Mantock
A New Portrait Shows King Charles With William & Kate Before The Queen’s Funeral
By Stephanie Topacio Long
Holly Willoughby & Phillip Schofield #Queuegate Drama, Explained
By Sophie McEvoy
Everything To Know About Taylor Swift’s 10th Studio Album, 'Midnights'
By Grace Wehniainen and Jake Viswanath
Get Even More From Bustle — Sign Up For The Newsletter