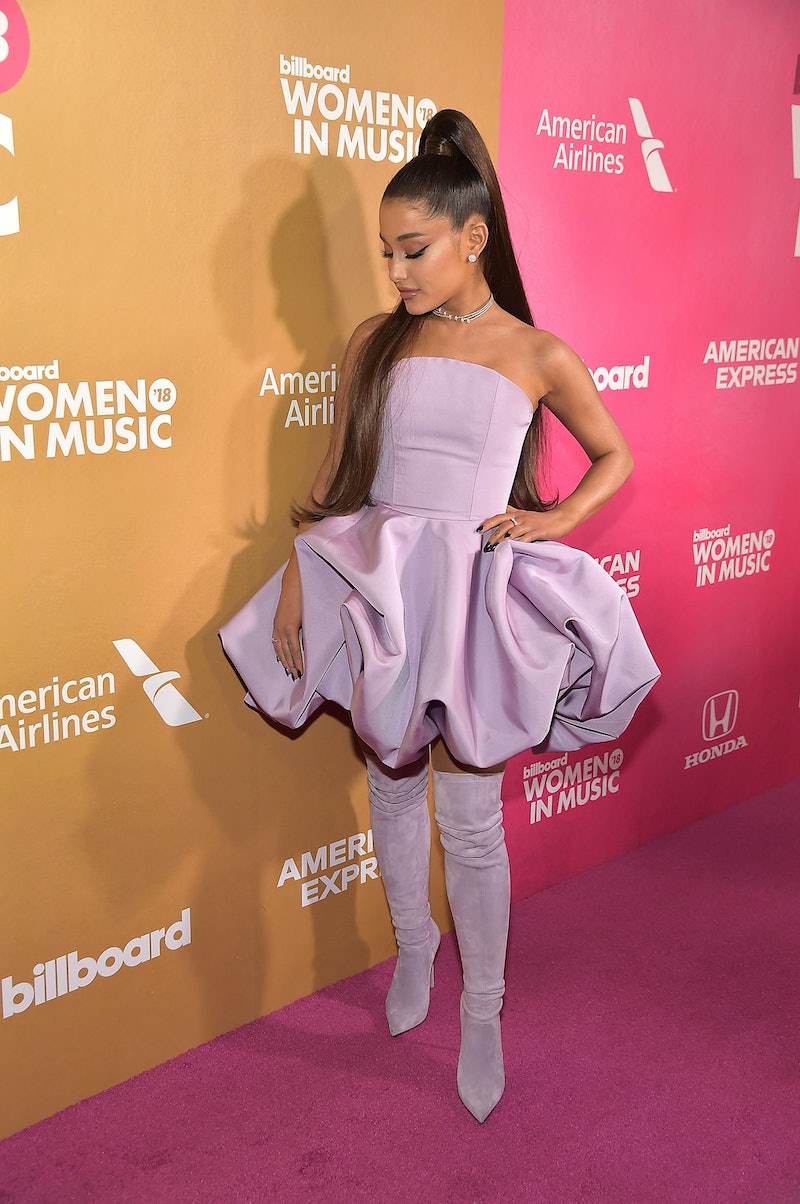 In case you've been disconnected from basically every corner of the internet and haven't heard yet, Ariana Grande's new album Thank U, Next dropped. It's not the only thing the singer released, though. There's also a new single and video, and Ariana Grande's blonde hair in "Break Up With Your Girlfriend, I'm Bored" is so much more than just a hairstyle for the singer.

Whether you're an Ariana Grande fan or not, it's hard to deny just how iconic her signature ponytail is. Not only has the singer clapped back at trolls who get a little too sassy about the pony, but she also even talked about how the ponytail represents an evolution for her. Most recently, Tyra Banks revealed that she wouldn't touch a hair on Grande's head during an America's Next Top Model makeover, and honestly, once your hair is Banks approved, you should truly not touch it. Clearly, she's not planning to get rid of it any time soon.

However, it didn't stop Grande from wearing her hair both out of its ponytail and blonde in her latest music video "Break Up With Your Girlfriend, I'm Bored," but the singer's choice to rock the style in the video doesn't seem to be an abandonment of the look. In fact, thanks to the ending of the video, Grande's blonde hair seems to be sending a message.

In the video, Grande appears in a storyline that's originally set up as a love triangle between a Grande lookalike and Riverdale's Charles Melton. The video starts out with Grande rocking long blonde hair, partially pulled back from her face. IRL, the singer has rocked similar looks before, but what's notable in the video is that her lookalike is wearing all of Grande's most signature styles including the dark ponytail, an oversized hoodie, and boots.

Soon, blonde Grande joins her lookalike and Melton and seems to start a friendship with both. In fact, there's even a scene when Grande touches the other woman's ponytail.

Fast forward a bit and Grande appears at a party seemingly hosted by her lookalike and Melton rocking her signature ponytail again and matching Melton's girlfriend.

At this point, you're probably getting some major stalker, single white female vibes, but here me out, that's not where Grande takes the video. By the end, its Grande and her doppleganger that are together, not Grande and Melton, and the video takes on a much more symbolic meaning.

If you've been following Grande's most recent work like "Thank U, Next" and "7 Rings," a pattern has been emerging. Grande has moved on from relationships with others and is focused on her relationship with herself. From her refrain in "Thank U, Next" where she sings "Plus, I met someone else/We havin' better discussions/I know they say I move on too fast/But this one gon' last/Cause her name is Ari/And I'm so good with that."

Then, came "7 Rings." While many focused on the boss vibes of the lyrics and video, Grande does explicitly talk about wearing a ring and not becoming a wife and how she's rather spoil her friends with her money. Basically, Grande doesn't need a man, and she's letting people know in her most recent singles.

Where does "Break Up With Your Girlfriend, I'm Bored" fit into this theme? It's Grande's choice of ending to the video. By the song's finale, not only has Grande transitioned to her signature ponytail look, but she chooses her lookalike. Hear me out, Grande is symbolically sending the message of self-love and self-acceptance by essentially choosing herself at the end of the video. This also means choosing her ponytail.

In fact, Twitter users also pointed out the same idea.

It's all about self-love, y'all!

Others, however, saw the video as an homage to female friendship. Grande wants Melton to break up with his girlfriend, so she can hang out with her.

Not matter which interpretation you choose, though, both fit with Grande's recent messaging. Grande's singles aren't created in a vacuum, and if you think she's just a pop diva, you may not be paying attention. All of the singer's singles have had meaning, and " Break Up With Your Girlfriend, I'm Bored" is no exception.