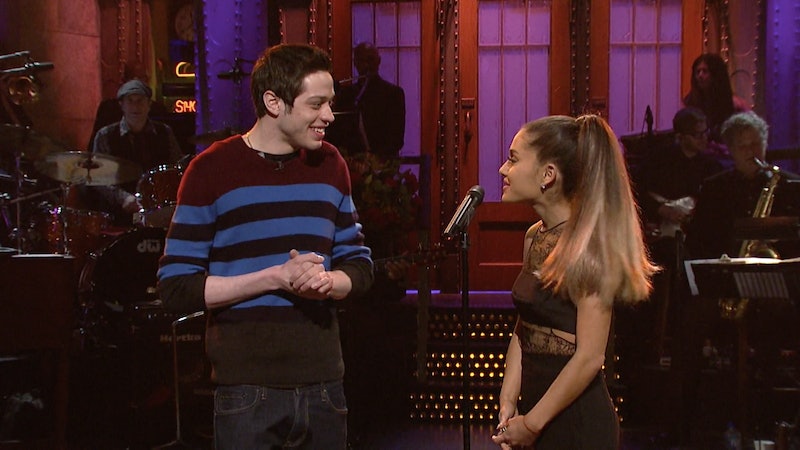 If you've been following Ariana Grande and Pete Davidson's relationship saga at all, you'd know that they love nothing more than sharing some adorable snaps of their significant other. On July 9, Grande posted a photo from her SNL appearance with Davidson, and it will make you want to relive how things began for them all over again.

On her Instagram Story, the "No Tears Left To Cry" singer gave fans a glimpse into a certain framed photo in her apartment. The photo in question featured Grande and Davidson on the Saturday Night Live stage together during a March 2016 episode that she hosted (she also served as the musical guest). During her monologue, she had a brief, but hilarious, interaction with her future fiancé when she performed a song titled "What Will My Scandal Be?"

The singer jokingly wondered what kind of grown-up scandal she should engage in for her career. Davidson offered her up a suggestion when he came onto the stage and asked her, "Hey, Ariana, I overheard. You like wanna smoke some pot or something?" Grande took it to the next level and replied with, "Pot? Let's smoke some crack, man." But, he wasn't about it as he said, "I'm good," and exited the stage.

Not only is the bit so funny, with both of their comedic chops on full display, but the moment, which was captured perfectly by the singer, was especially significant because it was the first time that the two were seen publicly together. Even though they wouldn't begin to date until two years later, it is fun to see how things kind of began for them. And obviously, Grande loves to look back on the moment as well.

To add another special spin on the photo, it's likely that SNL served as a very important marker for their engaged couple's relationship. While it's unclear exactly how Grande and Davidson met and where, there's a great chance that they met on the variety show. It would make sense, since as previously stated, it's the first time they were linked together in a public manner (albeit not in a romantic way). So, it's possible that Grande has the photo framed as a way to mark the first time that she met her current significant other. How cute.

Of course, they wouldn't begin to date until two years after their SNL appearance together. Their relationship was first reported in late May by multiple sources such as Bossip. The couple confirmed things themselves when they went Instagram official on May 30 complete with some Hogwarts-approved get-ups.

Shortly after Grande and Davidson were confirmed to be dating, they took another, majorly surprising step in their relationship. Us Weekly reported on June 11 that they were engaged after only a few weeks of dating. The comedian himself confirmed their engagement during his interview on The Tonight Show Starring Jimmy Fallon, where he described the situation as "lit." Can't argue with that.

While there were many who were all about the direction the twosome was taking, there were others who were slightly more critical of them moving so fast. When some similarly criticized Justin Bieber and Hailey Baldwin's quickie engagement, Grande decided to speak up on the issue in a since-deleted tweet. She wrote, in response to one fan's joke about the fast engagements, "You do realize we are human beings who love and have lives ...... right ....?"

The singer then touched upon some perceived criticism of her and Bieber's manager, Scooter Braun, and then echoed her fiancé's own words in her description of their love. "And that Scooter is a wonderful human being too who cares first n foremost ab [sic] our health and happiness? Love is lit. Sh*t happens. I hope to god it happens to you too. U deserve it." When someone explained that the user was joking, Grande did accept that the message was all in good fun.

It's not surprising that she would be initially defensive over her relationship to Davidson, though. The couple is obviously head over heels for each other, and apparently, they have their cute SNL appearance to thank for all of that happiness.