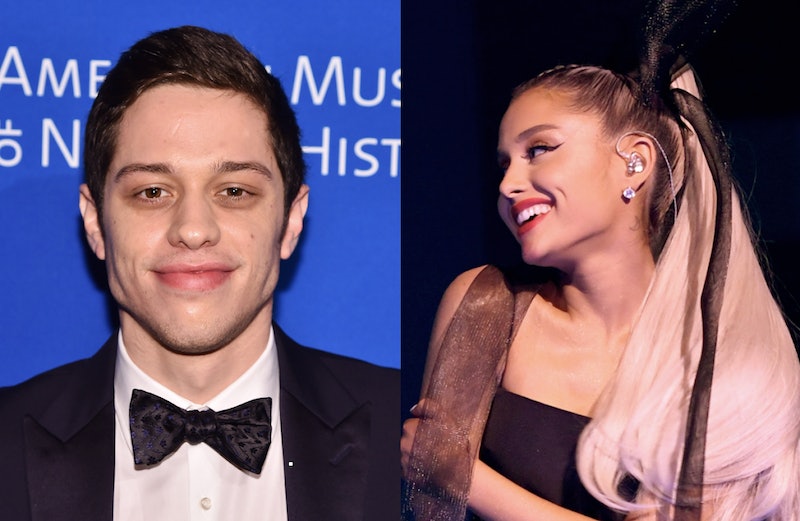 It's May 21, 2018. The royal wedding was two days ago, and most of us are still coming down from witnessing the everlasting love of Prince Harry and Meghan Markle. Then, a report starts circulating that steals everyone's attention: Ariana Grande, pop icon, and Pete Davidson, Saturday Night Live cast member, have begun dating. The unexpected pairing immediately has us intrigued, but what gets us really hooked is how intense their relationship becomes over the coming weeks: gushing Instagram posts, "lit" late-night appearances, and a handful of matching — and permanent (!) — tattoos. By the time they get engaged on June 13, our brains have totally shifted. Meghan and Harry who? It's all about Ariana and Pete, the couple everyone's obsessed with even if no one can quite figure out why.

But here's the thing: whether you're constantly refreshing Instagram for celebrity news or only vaguely interested for the sake of keeping up with conversation, the duo's romance is practically impossible not to spark your curiosity. After all, Grande and Davidson got engaged less than a month into dating and only shortly after each ended long-term relationships. Naturally, the speed and intensity of their bond has filled us all with excitement, confusion, a need-to-know-more, and (let's be real) plenty of judgment: after all, why would two 20-somethings so early on in their relationship make that move, that fast? Don't they know that's not how you're supposed to do things? Aren't they scared it's all just going to crash and burn?

Well, if they are, they're not showing it. Grande and Davidson's don't-give-a-f*ck attitude towards the internet meltdown over their speedy romance has just fueled our interest even more. And as we get deeper and deeper into the rabbit hole of analyzing their relationship — making timelines to figure out when exactly they started dating (it is suspicious...), studying Grande's very large, very expensive engagement ring, obsessing over the details of their ridiculously cool new apartment and screenshotting, tweeting, and straight-up judging the hell out of their (did I say permanent) matching tattoos — many of us also start questioning why we even care.

According to media psychologist Dr. Pamela Rutledge, it's because we simply can't get over the fact that by moving so fast and being so public with their love, Grande and Davidson are going against every "rule" of relationships we've come to know and follow. "This is not a social norm, it is an archetypal one," explains Rutledge in an email. "Many people are curious about how celebrities live... behaviors that are out of the norm make them notable and interesting."

When the news of Grande and Davidson's engagement was announced on the afternoon of June 13, practically everyone with internet access was sent into a frenzy. For weeks, we had all been following the quick progression of their relationship, from its initial reveal on May 21 to the responses from their exes to the increasingly frequent social media posts in which the duo happily — and excessively — expressed their love. Even now, every new development — a tattoo, a response from Davidson's ex, a heart-filled Snapchat — has us hooked: what will they do next? How far will they actually take this? Will their relationship, as new as it was, actually make it long-term? It just doesn't seem possible that two people could be that in love, that fast, and actually see their romance last.

According to psychologist Clarissa Silva, that skepticism is warranted. "It has been shown that falling in love takes longer than one month," says Silva, Behavioral Scientist/Relationship Coach and Creator of Your Happiness Hypothesis Method. Although some people may argue that it can happen sooner than that, they're typically mistaking love for lust, or initial infatuation. Real love, while possible to come quickly, usually takes a minimum of several weeks to kick in, as Psychology Today reports — making Grande and Davidson's professions of adoration for each other so early on in their relationship seriously questionable to say the least.

Yes, it is possible that the stars' relationship timeline is different than we think; although most fans believe that the duo didn't start dating until late May 2018, just a few weeks after each person broke up with their significant others, it's unknown if that's actually the case. They did meet during a March 2016 SNL episode, after all, and who knows if their romance actually started sooner than reported. While facts would be nice, not having the answers just fuels fans' fire to dissect every choice Grande and Davidson make, and causes us to question the speed and intensity of their relationship even more.

Of course, that's not to say that the duo don't truly feel in love with each other, or at least think they're in love; after all, it's easy to mistake lust for love, since "lust and the early stages of a relationship involve the addiction center of your brain, which is fed by the hormones that surge through you each time you see or think about the object of your desires," according to Michelle Archard, Romance Expert, in an interview with Bustle. And the early-on intensity also doesn't mean that Davidson and Grande are 100 percent bound to break up soon. But it does mean that if you're watching their romance with eyebrows raised, you're most certainly not alone — and if the unusual nature of their relationship makes you more interested in each new development, that makes perfect sense.

For some people, though, Grande and Davidson's romance is captivating not because it seems bound to fail, but because it might actually be true. After all, the duo do seem incredibly happy together, and have no qualms about taking major steps to solidify their bond, whether through tattoos, the engagement, or a shared apartment (i.e. the same reasons that have caused other people to put up red flags). If their romance is indeed actually this strong so early on, then it'd be anomaly among relationships, which tend to build up slowly over time.

And for fans hopeful for their own storybook romances one day, Grande and Davidson provide a glowing example. "This is a Cinderella story — not that Ariana Grande was home sweeping ashes or anything, but that she found her Prince Charming," explains Rutledge. "It strips away the realities of specifics and offers the promise of 'true love' with the glitter of Hollywood." Adds Bustle's Associate Social Editor Hannah Caldwell, a self-professed fan of the couple, Davidson and Grande's relationship has provided hope that fairytale romances are not totally implausible. "It's kind of like, if these two random people can find what seems like true love, then maybe I too could turn around and be in love in four minutes. You never know!" says Caldwell. "And even if they crash and burn like so many people tell me they will, then so it goes — they had each other while they did and they're enjoying their time. And that's what life's about."

For those in support of Grande and Davidson, the fact that their romance has moved at such a quick pace isn't seen necessarily as a bad thing. "The thought of me personally moving that fast is horrifying, but I am not them... I truly don't care about how fast they moved," explains Caldwell. "Obviously it's kept things entertaining as an onlooker, but there is no 'right' way to form a relationship. Some people take decades and some take days, and there have been successful and failed relationships with both paths. So who are we to say what's right?"

It's worth noting that even those who are supremely skeptical of Grande and Davidson don't necessarily want the relationship to fail — they just won't be surprised if it does. Many of us actually hope that the duo will succeed, for more reasons than the permanence of those tattoos. We all like love stories, especially ones where both people involved seem truly happy together. As Silva puts it, "We are constantly bombarded with inauthenticity in almost everything we see in media. We want this couple to be true to their commitment." As great as our judgment may be, our collective appreciation for a good romance is greater.

Frustratingly, there's no way of knowing the full truth about Grande and Davidson's relationship — whether it's real, whether it'll last, whether they're as happy as they clearly seem to be on social media. But what is guaranteed is that whatever happens next, every one of us — skeptics and fans alike — will be watching.