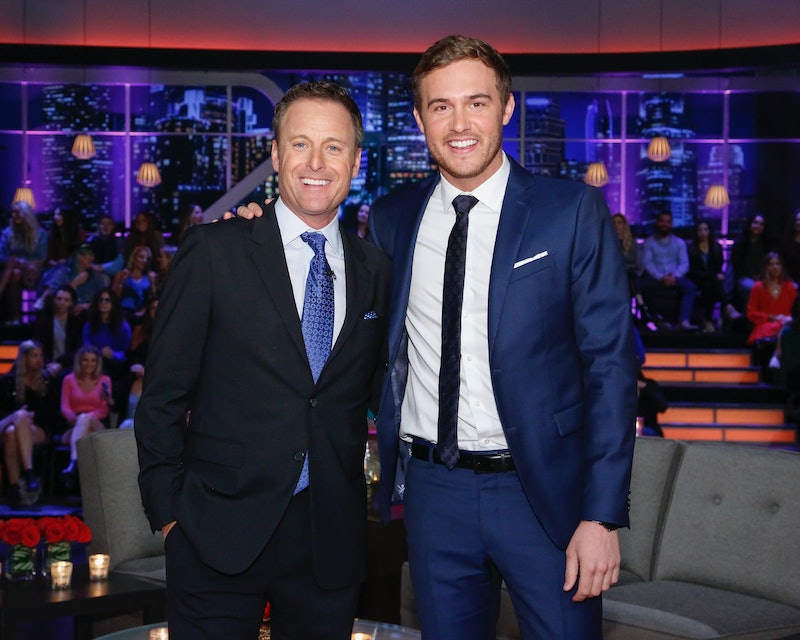 Peter's time as The Bachelor has come to its (very dramatic) end, and now, one of the producers is finally putting the season's biggest rumor to rest, once and for all. On Friday, March 13, Bachelor producer Julie LaPlaca addressed rumors that she dated Peter Weber with a post on Instagram that shared what really happened between them on New Year's Eve.

"Yes that was @pilot_pete in the tan jacket, no we didn't kiss at midnight," La Placa wrote on Instagram, alongside a photo taken during the New Year's festivities in Times Square. Rumors that Peter was dating his producer began swirling among Bachelor Nation after fans noticed that LaPlaca had spent New Years with the Weber family. She had also posted several photos on Instagram that showed a close relationship with Peter, although in some of them — including one posted on New Year's Eve — she attempted to obscure him from the camera.

While ABC's head of reality TV programming Rob Mills told Variety in early March that Peter is "very, very close" to LaPlaca and that the Webers are "all very fond of her," the producer herself officially shut down any rumors with her Instagram post. However, LaPlaca did use her post to praise the pilot and wish him luck in finding his future co-pilot. "Whoever ends up as his copilot for life is one lucky lady, because this guy has a heart of gold," she wrote.

Despite LaPlaca's reveal that she and Peter were just friends, several members of Bachelor Nation commented on her post to jokingly root for their relationship. "This was my favorite storyline of the season," Wells Adams wrote, while Katie Morton added that the rumors about LaPlaca and Peter were the "best part of the season."

LaPlaca's post comes just one day after Peter and Madison announced their split in their own Instagram posts, where the pilot wrote that he and the Auburn native "mutually decided to not pursue our relationship any further." Despite revealing that they still had feelings for one another during Peter's After the Final Rose special on March 10, the pilot wrote that he and Madison "agreed that this is what makes most sense for the two of us," and that he will always have love and respect for her in his heart. In addition to calling it quits with Madison, Peter ended his engagement with winner Hannah Ann in late January, after he confessed to her that he was unable to give her "his whole heart" and stop thinking about the runner-up.

Still, the pilot seems to be doing well after both breakups and has been spending time with his family in California. Peter also refuted rumors that his relationship with his mother, Barbara, was strained after she shared her disapproval over his relationship with Madison during ATFR. During a brief interview with Page Six on March 13, Peter also explained that his mother had nothing to do with his decision to break things off with Madison.

"This is stuff between Madi and I solely 100 percent," Peter said. "People have their opinions [about the breakup] but it should just be two of us. He also said that there was "mutual respect and love" between him and his ex, and that he was "doing good" post-split. Now that he's single once more, maybe it's time for Peter and his producer to pursue a romance for real — after all, fans already know that the Webers approve of her.