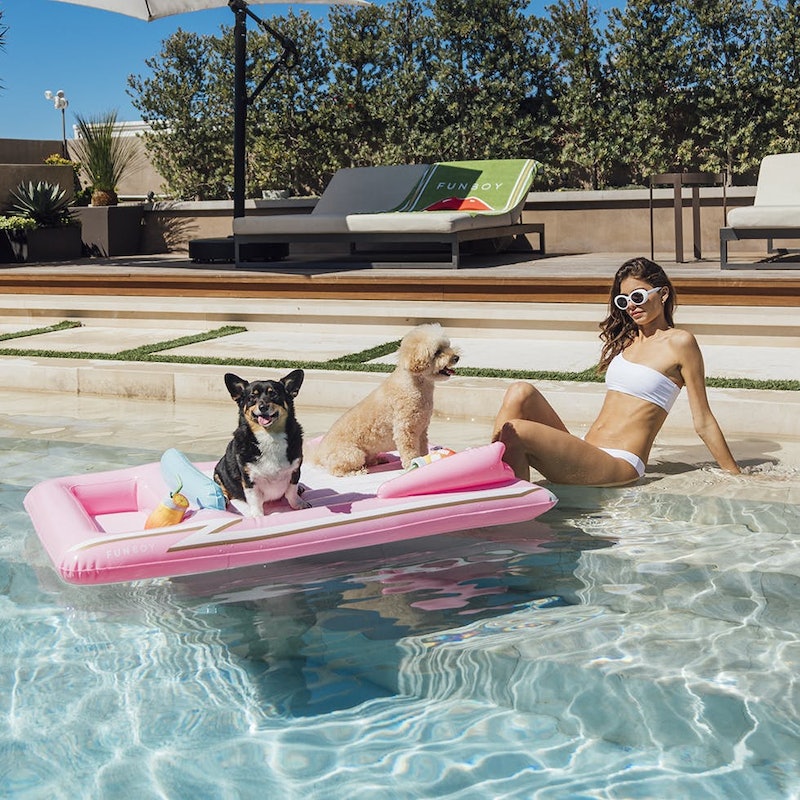 Pool floats have never really gone out of style, but they seem to be undergoing something of a renaissance in 2018 — and in case you needed more proof of the fact, all you have to do is look at Barkshop's Funboy x Bark pool floats for dogs. A collaboration between the creators of Bark Box and Los Angeles-based, Instagram-famous pool float company Funboy, these pool floats look just like two of Funboy’s most popular human-sized floats — except they are meant exclusively for your favorite canine pals. Not going to lie: It’s a little difficult for me to look at a dog floating around a luxurious on an inflatable pink convertible and not scream, “THIS IS THE VERY DEFINITION OF EXCESS!” At the same time, though, it’s just so dang cute that, uh… I’ll allow it.

Funboy’s floats are not for the faint of heart; their human-sized options start at $39 (for the Cactus Cooler Tube Float, a basic floating ring with printed all over with cacti and flamingoes), but they’re more likely to set you back at least $99, if not more. Some products the company offers —like inflatable pools shaped like convertibles — can set you back nearly $270.

The car- and boat-shaped inflatables, however, are also available as slightly less expensive lounging pool floats (one of which went viral just a few weeks ago) — and, as you might have guessed, those are the ones that have been shrunk down for the pupper-sized versions. The regular Funboy Yacht Float costs $128; it’s big enough for an adult human to recline comfortably, and even includes cupholders and a little well at the prow of the boat you can fill with ice and refreshing beverages.

The Retro Pink Convertible Float, meanwhile, also costs $128; however, it’s wide enough for up to two adults and includes a much bigger cooler section under the “car’s” hood:

The doggo versions of the floats and virtually identical, save for the size; they’ve even still got the cooler wells, although most of the product images suggest filling them with toys instead of drinks (because, obviously, your pupper has no need of rosé). Here’s what the yacht looks like:

Both floats are available at Barkshop’s and Funboys’ websites for $59 apiece — although if you’re feeling really ambitious, you can go ahead and nab a dual set of one human float and one dog float for $169 per set — saving about $18 more than if you'd bought the human and dog floats separately.

A word of warning, though: Although they’re made of puncture-resistant vinyl, ensuring that little claws won’t literally burst your bubble, the dog floats will only hold up to 70 pounds. If your canine companion is of a bigger breed, you probably won’t want to set them afloat on these suckers; indeed, you’ll likely want to both check a chart detailing the average weights of common breeds and actually weigh your own pupper before committing to a float for Fido. (And also, make sure your dog knows how to swim and doesn’t have a strong dislike of the water. Safety and comfort first and all that.)

But, y’know, hey. Even if the Funboy x Bark floats end up not being quite right for your pup, there are still plenty of options for your human self, too. What with all of the truly astonishing floats available this year, it looks like the summer of 2018 is going to be one giant pool party; we’ve got floating avocados, floating bean bag chairs, floating Inflatable Hunks, floating bars, Unicorn Islands... What more could we ask for? If the world is going up in flames around us, we may as well send it all off with a whimsical bang, right?