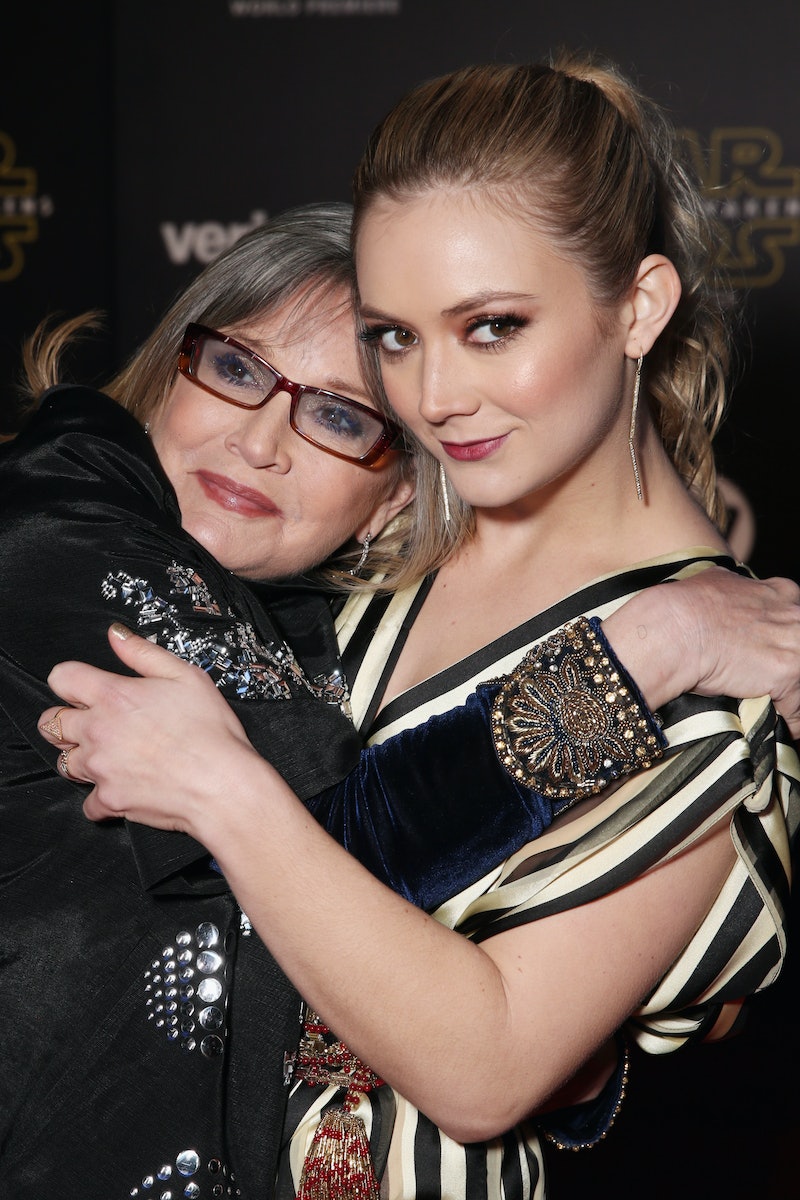 To mark the third anniversary of her mother's death, Billie Lourd honored Carrie Fisher with a musical performance shared on Instagram, continuing her tradition of celebrating the late actor with some of the things that Fisher loved the most. Describing the performance of "Angel from Montgomery" by John Prine as part of her "Take Your Broken Heart And Turn It Into Art Bathtub Sessions," — which is named after one of Fisher's most iconic quotes — Lourd captioned the touching video with a quote from author Anne Lamott about dealing with grief.

Lourd's performance isn't the first time that she has reflected on losing her mother and her grandmother, Debbie Reynolds, during this holiday season. On Dec. 25, the Scream Queens actor posted a photo from her childhood, where she is being held by Fisher and Reynolds, who is smiling for the camera. "Happy holidays! (But also sad/emotional/weird/stressful holidays!)," Lourd captioned the throwback photo. "Sending my love to everyone who has lost someone they loved and is missing them a little extra today. I see you. It’s okay if everything ain’t all merry and bright. It can be a mix of all of it."

In her post, Lourd also encouraged anyone else struggling with grief during the holidays to "feel all of the feelings," and celebrate their late loved ones with some of the things they enjoyed when they were around, as she does with her mother. "Eat something delish they used to love. Put on one of their favorite songs. Tell a story about them," she wrote. "Be kind and patient with yourself. Don’t grieve in silence."

Lourd first began celebrating her mother with musical performances in December of 2018, when she shared a video on Instagram singing "These Days" by Jackson Browne. "It has been two years since my Momby’s death and I still don’t know what the 'right' thing to do on a death anniversary is," the actor captioned the emotional videos at the time. "So I decided to do something a little vulnerable for me, but something we both loved to do together - sing. This is the piano her father [Eddie Fisher] gave her and this was one of her favorite songs."

In October, to mark what would have been Fisher's 63rd birthday, Lourd continued the tradition by performing one of the Star Wars star's favorite songs — "American Girl" by Tom Petty — in one of her favorite places, the bathtub in their home. "Not that I’m some kind of grief expert by any means, but on milestones (or whatever you want to call them) like this, I like to celebrate her by doing things that she loved to do," Lourd captioned her Instagram post about the video. "I’ll probably have a pint of vanilla Haggen Dazs and a Coca Cola for dinner."

Fisher died on Dec. 27, 2016 at the age of 60 after suffering a massive heart attack on a flight from London to Los Angeles, and her mother, Reynolds, died the following day as the result of a stroke. Since then, Lourd has been incredibly open about struggling with the grief of losing them, though she told Town & Country in a 2017 interview that she has been finding comfort in remembering Fisher and Reynolds' joy and humor. "If life’s not funny, then it’s just true—and that would be unacceptable," Lourd said, quoting her mother. "Even when she died, that was what got me through that whole thing."

Lourd has also continued to honor her mother and grandmother with her acting roles. She will play the granddaughter of Reynolds' character on Will & Grace, and is currently featured in Star Wars: The Rise of Skywalker. Through her career, her social media posts and her everyday life, it's clear that Lourd is determined to continue to take the hardship of loss and turn it into art — just like Fisher herself once advised.