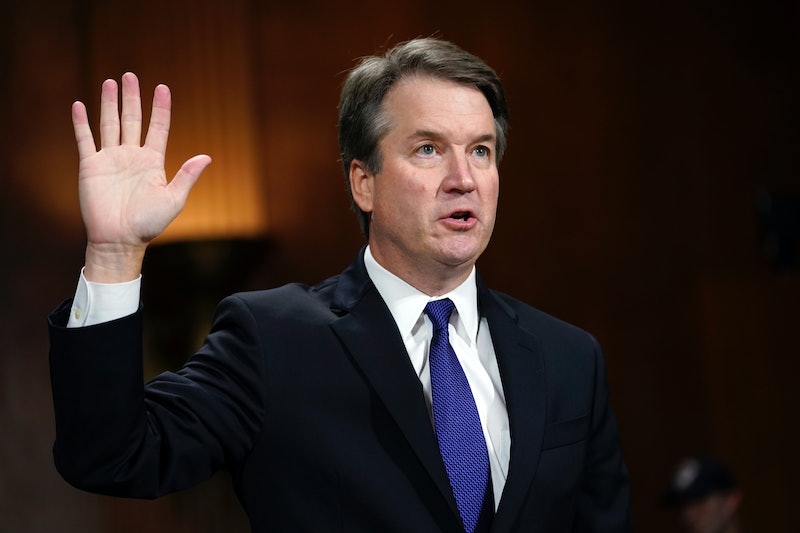 On Saturday, following weeks of controversy, Brett Kavanaugh was confirmed to the Supreme Court. With a 50-48 vote, senators approved his nomination, making him the second justice President Donald Trump has successfully appointed to the court.

The vote fell along party lines, save for Democratic Sen. Joe Manchin of West Virginia, who voted "aye" on Kavanaugh, and Republican Sen. Lisa Murkowski, who voted "present." Although she voted against Kavanaugh during the Senate cloture vote Friday, Murkowski chose to vote "present" on Saturday in Republican Sen. Steve Daines' absence. (He flew back to Montana to attend his daughter's wedding on Saturday.)

It's an arrangement known as "pairing." Senate Majority Leader Mitch McConnell's spokesperson explained, “When a senator is necessarily absent (for example, attending their daughter’s wedding), they can ‘pair’ with another senator who is voting the opposite way."

First, Christine Blasey Ford alleged that Kavanaugh sexually assaulted her while they were both teenagers in high school. According to the California professor, she was 15 at the time and Kavanaugh was 17. In response to the allegation, Kavanaugh said in a statement, "This is a completely false allegation. I have never done anything like what the accuser describes — to her or to anyone."

Ford ultimately testified about her allegation before the Senate Judiciary Committee, as did Kavanaugh. However, senators largely remained divided along party lines, even after hours of testimony.

Later, Deborah Ramirez alleged Kavanaugh exposed himself to her while the two were playing a group drinking game as students at Yale University. She claimed that she was forced to touch Kavanaugh's penis as she pushed him away. Speaking before the Senate Judiciary Committee last Thursday, Kavanaugh said, "I’ve never sexually assaulted anyone. Not in high school, not in college, not ever. Sexual assault is horrific."

The third woman to make an allegation against Kavanaugh was Julie Swetnick, who said in a "sworn declaration" that she saw him at parties in the 1980s where, she claimed, he wasn't "taking 'no' for an answer." In her statement, Swetnick said that Kavanaugh and his friend would try making girls "inebriated and disoriented so they could then be 'gang raped'" by a "'train' of numerous boys." Swetnick further alleged that she was "incapacitated without my consent and unable to fight off the boys." Kavanaugh denied these allegations, saying in a statement that "this is ridiculous and from the Twilight Zone. I don’t know who this is and this never happened."

Regardless of how the confirmation vote ultimately turned out, the way the Senate chose to handle the allegations will go down in history. The confirmation process, above all, renewed a vital conversation about the obstacles so many survivors face in coming forward with their stories.