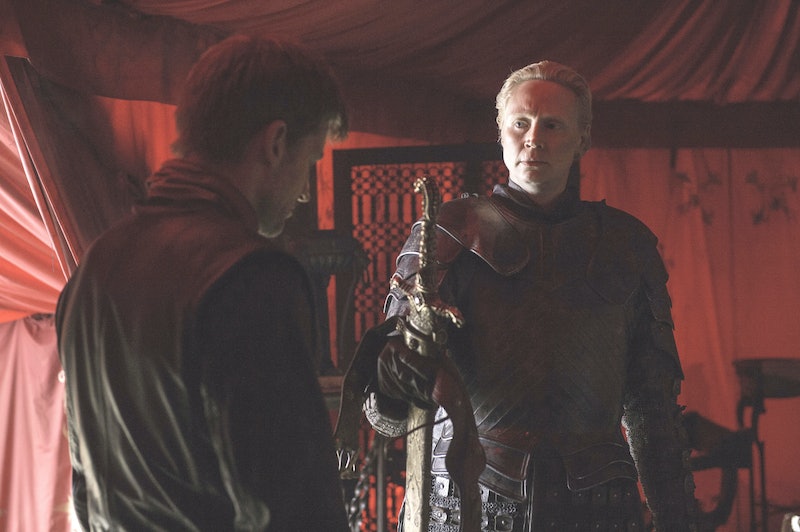 What the Stark sisters were up to during the Game Of Thrones episode "Beyond The Wall" is beyond me. After Littlefinger gave Sansa the not-completely-terrible advice of using Brienne to keep the peace between her and Arya, Sansa sent Brienne away to King's Landing. While that left Sansa vulnerable to Littlefinger and her assassin sister's many-faced games, Brienne and Jaime 'shippers could rejoice knowing that it most likely meant that the Kingslayer and Brienne the Beauty had a chance of reuniting — after all, Sansa even said as much. And thanks to the preview for the Season 7 finale, it has been confirmed that Brienne and Jaime will reunite on Game Of Thrones at the Dragonpit. But that doesn't necessarily mean something good will come of these friends meeting again.

Sansa was called to King's Landing by Cersei and — kind of like with Sansa and Arya — I was unsure exactly why Cersei was luring her Stark sister-in-law to the capital. Sansa referred to a gathering, so perhaps the Queen of Westeros was preemptively inviting the Lady of Winterfell to the White Walker show-and-tell that Tyrion promised. Even if that wasn't why Cersei sent a raven to Sansa, Jon did successfully capture a wight and will be presenting it at the Dragonpit in King's Landing. So no matter what Cersei's goal in inviting Sansa to the South was, the Dragonpit meeting will have Brienne is in attendance at this great gathering that's being overseen by Jaime and Cersei.

If you missed Brienne entering the Dragonpit in the above video, it would be understandable since it's only shown for a split second in the preview. But she's most certainly representing the interests of Sansa and the North by standing behind Jon Snow in between Ser Davos and Podrick. With them are also Tyrion, Jorah, and Theon, along with some of the Dothraki army.

Now, Sansa could have sent Brienne in her stead so that she and Littlefinger could take down Arya, but rather than dwell on the impending doom that seems to be surrounding the Stark sisters, let's focus on Brienne and Jaime being in the same place at the same time. After Brienne delivered Jaime to King's Landing, she resumed her quest to find the Stark girls for Lady Catelyn in Season 4. The next time Brienne and Jaime saw each other was in Season 6 when Brienne and Podrick traveled to Riverrun to deliver a message from Sansa to her great-uncle Brynden "the Blackfish" Tully. Although that reunion ended with the Blackfish dead and Brienne and Podrick fleeing by boat, Jaime and Brienne still shared a mutual respect and no desire to fight one another.

Now that they will be on opposing sides again for the Season 7 reunion, things may not end so peacefully. As she made clear at Joffrey's wedding to Margaery, Cersei is threatened by Jaime and Brienne's relationship, and Jaime is now sitting by Cersei's side at the Dragonpit. So rather than hope for a full-blown reunion, it may be best if Brienne and Jaime don't even speak to one another. That might be the best case scenario considering Cersei's capacity for wrath and the fact that a war could easily break out since the armies for the Lannisters and for Daenerys seem to be waiting in the wings.

With Cersei allegedly being pregnant, Jaime is probably very much under her thumb and if a battle did occur, he'd be expected to kill anyone on Daenerys and Jon's side — including his bestie Brienne. So although a heartwarming reunion would be a lovely thing to occur in the Season 7 finale of Game Of Thrones, I'm hoping that they stay as far away from each other as possible in the Dragonpit. And if fighting does take place, Brienne fans should want Tormund also to be there since he'd kill anyone who threatened Brienne — including Jaime Lannister — without a moment's hesitation.