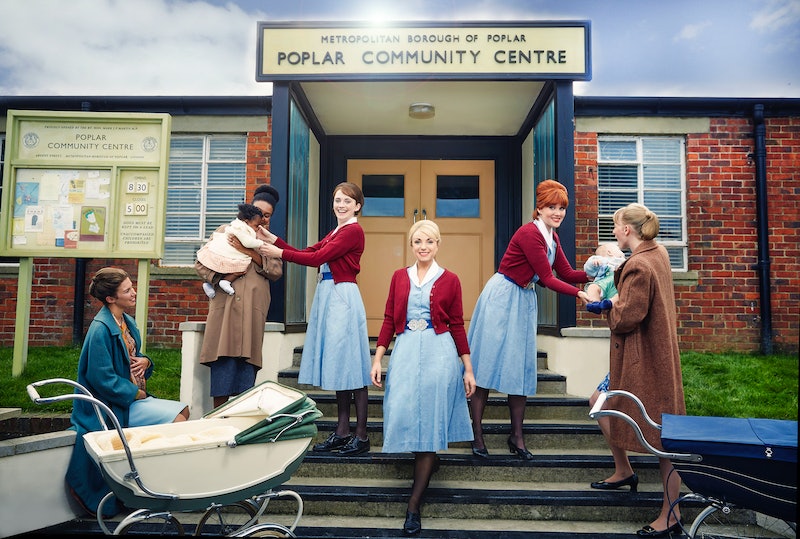 It's unusual for a show to not only gain in popularity in its sixth season, but to also continue to break new ground for women on television. Under the careful direction of series creator Heidi Thomas and a team of all women writers, that is exactly what the feminist treasure Call the Midwife has done. So far in 2017, the BBC and PBS series has won a Gracie Allen Award for Best Ensemble Cast, been named the Most Popular Period Drama at the UK's National Television Awards, and earned the honor of being dubbed the Best Show of the 21st Century in a Radio Times poll. In an interview with Bustle, Thomas is quick to express her gratitude for her show's continued success, and eagerly shares her hopes for the future of Call the Midwife.

"I think it’s lovely that we are still telling stories about women, which are actually quite challenging in their way, and yet we still have this hugely invested and loyal audience saying, yes, we want to hear those stories," Thomas explains during a phone chat in late April. "That's really what we exist for as a show, we exist to shine a light on women's experiences, and to give voice to women's stories that were never told."

In Season 6, that means taking a deep dive into the stigmatization of mental illness, the horror of female genital mutilation, and the dangers and freedoms the arrival of the birth control pill brought to women in the '60s.

All of those topics could be considered taboo, especially for a series that is decidedly mainstream in the U.K., but that only makes Thomas all the more determined to tackle them. For Thomas, Call the Midwife has always been a way to examine the past as an echo of the future.

With the show set to introduce its first black midwife in Season 7, Brexit, and its possible negative impact on the immigrant workers who have contributed so much to Britain's National Health Service, was not far from Thomas' mind. The show's new character, Lucille, will be part of the influx of West Indian nurses who arrived in England to join the National Health Services in the '60s.

"Lucille is someone completely new and she does represent an extraordinary generation of young women who were in excess of 30,000," Thomas says, the excitement about introducing Lucille into the narrative clear.

Likewise, when it came time to introduce the pill into the show's narrative, Thomas scoffs at the people who joked with her that its arrival would mark the end of Call the Midwife. After all, a show about women giving birth couldn't possibly go on once women gained control of their reproductive rights, right? "The pill was not a silver bullet that sterilized every woman in the world," Thomas says with a laugh. "It was a much grayer, more interesting choice. It was a choice; women had a choice and that is where the drama lies."

Thomas is looking forward to exploring what the introduction of the pill will mean to the women of the East End. It was impossible not to be swept away by the excitement of all the story possibilities the historical moment would bring as the writer discussed the moral implications for the nuns of Nonnatus House, the new sense of autonomy many women would gain, and the inherent dangers that existed for women when the pill first became available.

"You have to remember for every woman who was exultant about having control over her own uterus, there was a shell-shocked man having to make his own sandwiches. We drive that feminist bus through the second half of the series, I’m telling you," Thomas says of Season 6.

Fans in the U.S. should brace themselves as the new season moves into its back half on PBS. Thomas revealed the finale is so harrowing some fans in the U.K. had t-shirts made saying "I Survived the Call the Midwife Series 6 Finale." The show has a reputation for being an emotional juggernaut, and it's not untrue. Between its stories of the many triumphs and tragedies involved in the process of bringing new life into the world, the show has created a core cast of characters whose journeys are every bit as relevant and moving as the births of the week.

For instance, Season 6 revisited the brutal attack on Sister Mary Cynthia in Season 5 in order to not only make a statement about what it is like to live as a survivor of assault, but also to explore the psyche of a character who has been part of the show since it began. Thomas was eager to truly explore Sister Mary Cynthia's plight in further detail, and what it means for her character moving forward.

"She hasn’t been able to come to terms with its assault on her personhood as well as on her physical form," Thomas says of Sister Mary Cynthia's emotional storyline. "Therefore I wanted to take that journey further, and that in turn, takes us from an analysis of the pressures society imposes on women who have been sexually assaulted to how society deals with those who are suffering mentally. Even looking at it in the historical context I could see a really true and timeless aspect of the human experience that would enrich our drama and enrich our understanding of Sister Mary Cynthia."

It's fitting that ultimately Mary Cynthia will find a way to make a choice about her need for mental healthcare only after returning to Nonnatus House, where she is surrounded by her fellow Sisters and friends. There is no greater support system for women than other women on Call the Midwife, and that may be the secret to the series' success.

"In many ways, women have transferred their kinds of struggles to a more positive, nurturing, and supportive world, but there are many struggles that are the same," Thomas muses. "I think it's fascinating. Some things simply don’t change, some things haven’t changed enough, and I think a lot of the grit and the texture of Call the Midwife comes from bringing together different generations of women and their experiences."

Is it any surprise the BBC has ordered three more seasons of Call the Midwife? A show so steeped in the history of women and the power of their relationships is essential to the TV landscape and for the viewers who continue to find strength and joy in their weekly visits to Nonnatus House.