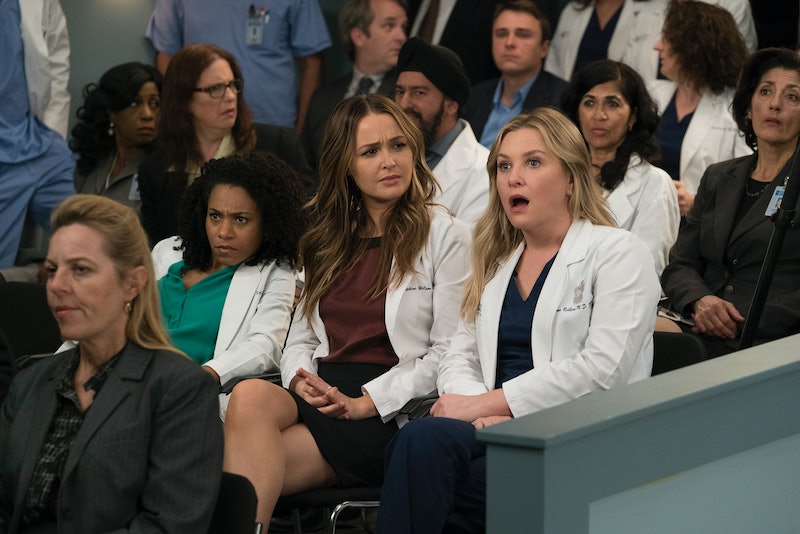 While Grey's Anatomy viewers know to expect a roller coaster of emotions within a single episode, that doesn't always soften the blow of the series' many shocking plot twists. Despite getting a behind-the-scenes look at those twists and turns while filming, the Grey's cast isn't necessarily immune to this emotional turmoil, either. For Camilla Luddington, who plays Grey's surgeon Jo Karev, there's one scene in Season 9 involving Arizona (Jessica Capshaw) and Callie (Sara Ramirez) that's stuck with her since the episode first aired in May 2013.

"It's the moment when Callie discovers Arizona's wedding rings on the other doctor, and she realizes that she's been cheated on," Luddington reveals to Bustle of the scene following Arizona's hookup with Dr. Lauren Boswell (Hilarie Burton). "I did not know that was going to happen in the table read, and I just remember thinking like, 'Ahh!' I was losing my mind. I was like on the floor crying, it was so shocking."

It's clear that Luddington is a true super fan of Grey's, as she continues talking about other iconic moments from the series that have stuck with her — even ones that she's made up on her own. Luddington adds that she sometimes wishes she had been able to join the cast sooner in order to work with some of her favorite characters, especially Dr. Lexie Grey, (Chyler Leigh), who met her demise in Season 8.

She even has some ideas for hypothetical Jo and Lexie scenes. "I think it would be really funny if they had met when they were kind of single and denying that they were in love with the guys that they're in love with," she adds, referencing Eric Dane's "McSteamy" Mark Sloan and Jo's now-husband Dr. Alex Karev (Justin Chambers). "Seeing them try to be single girls while denying being desperately in love would have made for some good comedy."

Since Lexie couldn't realistically return to the show (in the flesh, anyway), the Grey's character Luddington wishes she could bring back is Capshaw's "hysterical" Arizona, who last appeared in the show's Season 15 finale. Though she admits that she's biased because the actor is one of her best friends in real life (Capshaw recently attended her wedding to Matthew Alan in Aug. 2019), Luddington wishes the duo had more onscreen moments together.

"She had so many scenes with April (Sarah Drew) where they're just like getting drunk together that were just amazing. I would have loved to have been part of them," explains Luddington.

Although the British actor promises Jo and Alex's relationship is "super solid right now," she knows that in Shondaland, no one's happiness is ever guaranteed.

"Any time they're happy, I'm just like, 'uh-oh, what's going to happen?' she jokes. "One of the great scary things about Grey's Anatomy is that you can love a couple and they can completely turn around and break up and your heart is broken too, as a fan. But it makes for great drama."

Aside from Jo and Alex, of course, Luddington says her favorite Grey's couple of the moment is Amelia (Caterina Scorsone) and Link (Chris Carmack). "It's funny because I loved her and Owen together, but they just have such great chemistry. I was like, 'Wait a second.' I'm super in, sold. I'm rooting for them!"

Between her favorite plot twist, Jo and Lexie fan fiction, and her very justified fears about her character's relationship, it seems like Luddington might be more of a Grey's superfan than anyone else.

More like this
Natalia Dyer Opened Up About Steve & Nancy’s “Lovely” ‘Stranger Things’ 4 Dynamic
By Grace Wehniainen
These 2 Tragic ‘Stranger Things’ Finale Moments Were Improvised By The Actors
By Grace Wehniainen
What Working At Marvel Is Really Like, According To A 'Ms. Marvel' Co-Creator
By Gretchen Smail
Zooey Deschanel Can't Be Anyone But Herself
By Samantha Leach
Get Even More From Bustle — Sign Up For The Newsletter