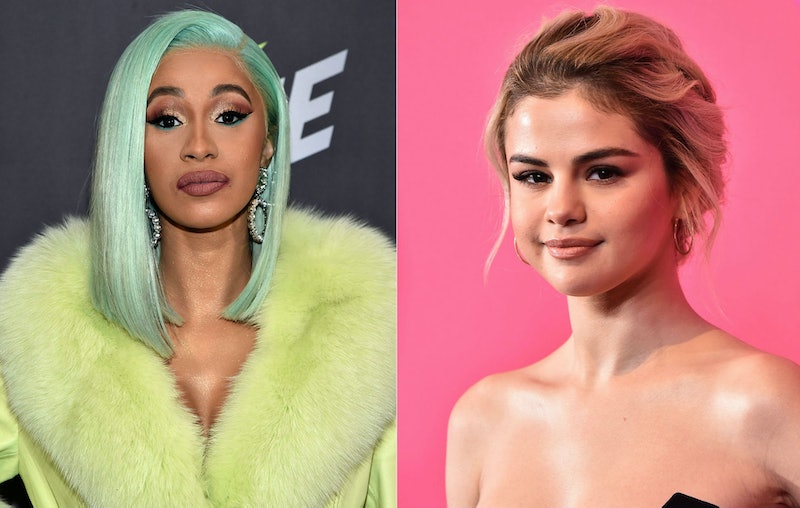 This is a beautiful show of love and support. On Thursday, Cardi B supported Selena Gomez on her Instagram Story by sharing a photo of the singer performing. The rapper captioned her image, in all caps, "You are amazing." Cardi B's praise for the 13 Reasons Why executive producer comes after reports surfaced on Oct. 11 that Gomez entered a mental health treatment facility. (Bustle reached out to Gomez's rep for comment, but did not receive an immediate response.)

According to TMZ, the former Disney Channel star was reportedly hospitalized after having an emotional breakdown during a recent hospital stay. The publication also reported the 26-year-old is now receiving mental health treatment.

Since September, Gomez has had two emergencies, sources also informed TMZ. She reportedly faced a low white blood cell count causing her to become "despondent and emotional." As for her most recent hospital stay, which TMZ reports occurred last week, Gomez reportedly "freaked out" upon being told she wasn't allowed to leave the hospital. Reportedly, the latter incident led to the "Back To You" singer being admitted to a psychiatric facility.

People also reported on Thursday that a source confirmed Gomez has been struggling. The insider said,

"She has had a tough few weeks and the panic attack in the hospital was the tipping point. She realized she needed to seek additional help for her ongoing emotional issues. She’s surrounded by close family and has a lot of support. She’s doing better now and is seeking treatment on the east coast."

E! News reported something similar, saying that Gomez's treatment will help with "ongoing issues related to anxiety and depression," which is something the singer has opened up about in the past.

It's no surprise that Cardi B sent Gomez so much love. They recently collaborated on "Taki Taki," a dance tune also featuring DJ Snake and Ozuna that was released on Sept. 27. The Invasion of Privacy artist has been known to praise Gomez.

As reported by E! News on Sept. 28, Cardi B opened up about working with Gomez on Billboard's Instagram Stories, where she gushed about the track, "It's very Spanish. It's very like a Spanish vibe. As soon as I heard it, I was like, 'I want to get on it.'" She continued, "Then I found out Selena Gomez was going to be on it, and I'm like, 'Oh, sh*t!' I knew it was going to be a hit."

Gomez has continuously been open about her struggles with mental health, in addition to her other health battles, including lupus and having a kidney transplant. As Harper's Bazaar's March cover star, she unapologetically admitted,

"I’ve had a lot of issues with depression and anxiety, and I’ve been very vocal about it, but it’s not something I feel I’ll ever overcome. There won’t be a day when I’m like, 'Here I am in a pretty dress — I won!' I think it’s a battle I’m gonna have to face for the rest of my life, and I’m okay with that because I know that I’m choosing myself over anything else."

The way she's discussed her issues with depression and anxiety is not only brave, but inspiring. Gomez shows there is no shame in dealing with mental health issues, just like it's absolutely OK to get help.

As she said, this is an ongoing fight Gomez faces, so it's good that she has people by her side, like Cardi B. Now more than ever, she needs all the support she can get.