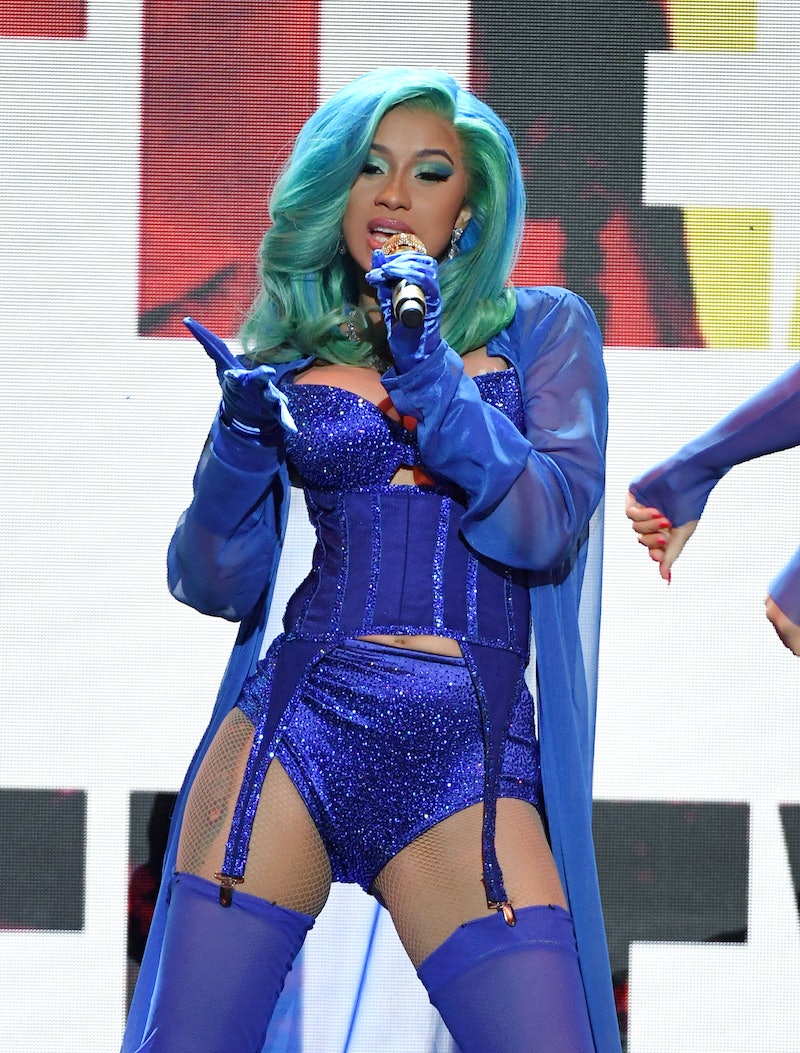 On Monday April 1, it was announced that Cardi B will performing at Hot 97's Summer Jam, adding yet another performance to her already tightly-packed schedule. Billboard reported that Cardi is slated to perform on the showcase's main stage at MetLife Stadium in East Rutherford, New Jersey on June 2 and the news couldn't come at a better time for fans who may be trying to catch Cardi in concert this summer. The show is said to also feature other big names such as Meek Mill and Migos and will additionally include performances by A Boogie wit da Hoodie, Tory Lanez, Rich the Kid, Blueface, Trippie Redd and Davido, according to Billboard. It's also worth pointing out the concert, which has notably become one hip-hop's most anticipated annual events, will feature a remarkable amount of female talent for this year's festivities.

In addition to Cardi, Complex shares that rappers, City Girls, Megan Thee Stallion, Kash Doll, Melii, as well as singer Nicole Bus will all hit the stage during the concert. This year's female-centric announcement arrives just two years after rapper Remy Ma's monumental tribute to women in hip-hop at the venue in 2017. During her appearance that that year's Summer Jam concert, Remy shared the spotlight with some of the most powerful ladies in hip-hop including, Queen Latifah, MC Lyte, Lil Kim, Monie Love, Lady of Rage, Rah Digga, Young M.A. and Cardi B, uniting women throughout the genre in a way that many hadn't seen before.

With her unstoppable domination on the music charts, Cardi's certainly going to be a busy bee during this spring/summer season. Amidst touring to support her 2018 debut album, Invasion of Privacy, Cardi will also begin her first Las Vegas residency at The Palm Casino's KAOS nightclub on Saturday, April 6. Along with that, she is also set to perform and headline many other festivals throughout the country including Miami's Rolling Loud and The Bonnaroo Music and Arts Festival in Manchester, Tennessee. On April 2, it was also announced that Cardi will, along with Travis Scott, co-headline Jay-Z’s eighth annual Made in America festival over Labor Day weekend in Philadelphia, PA, according to Variety.

Given the history of Cardi's unrelenting work ethic, it should come as no surprise that the rapper has set a lot of big plans in motion this year. In addition to dominating the music world, Cardi, who debuted her own clothing line through a partnership with Fashion Nova last year, recently revealed a collaboration with Reebok that has all but solidified her status a marketable superstar. She will also serve as a judge, along with Chance the Rapper and T.I., on Netflix's talent competition, Rhythm + Flow which will make its debut sometime this year.

And just last month, Rolling Stone revealed that the rapper filed an application to trademark the term "Okurrr" — a word which has notably become synonymous with the "Money" entertainer. Cardi filed an application to stake claim to the sound through her company Washpoppin, Inc. The legal filing, which was dated March, 11, 2019, will reportedly cover merchandise, including clothing and other goods such as paper cups and posters.

In light of her many ventures, it seems that Cardi's presence may soon be more ubiquitous than ever before. And with Summer Jam now right around the corner, fans will have yet another opportunity to catch her on the big stage.