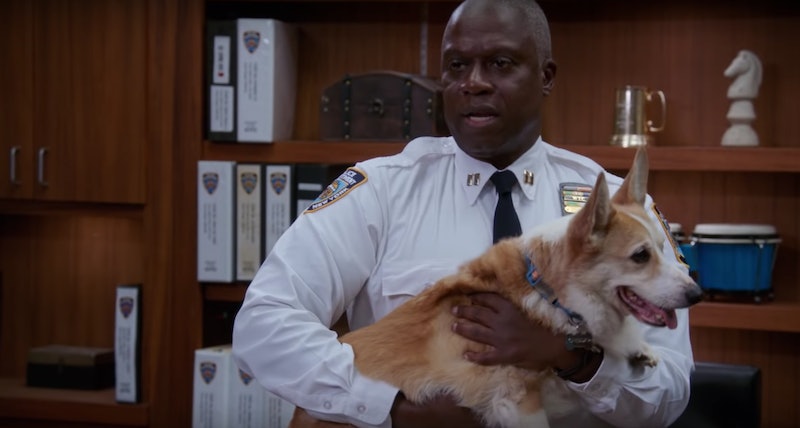 Sad news from the 99th Precinct. Stewart, one of the dogs who played Cheddar on Brooklyn Nine-Nine, has died. As Captain Ray Holt once said, "Everything is garbage." On Monday, July 8, Stewart's owner shared that the Corgi that portrayed Captain Holt's beloved pup "crossed the rainbow bridge" that day. He was 13.

“My precious boy Stewart crossed the rainbow bridge today. We went to the beach (his favorite place) where he frolicked in the surf and then enjoyed a picnic lunch of In & Out burgers. We relaxed in the sun and just enjoyed each other’s company. Our veterinarian met us there later and Stewart went to sleep peacefully in my arms while listening to the sounds of the ocean. He was a one in a million kind of dog, he was my supaah staah.”

His final hours were spent at the beach, eating burgers, and with his buddies. Man, that is just about the sweetest, most devastating thing.

Multiple dogs have played Captain Holt’s beloved Corgi throughout the series, but as Entertainment Weekly noted, Stewart played the role the longest. It looks like they have kept the part of Cheddar in the family: Back in May, Stewart’s owner announced on Instagram that he “has officially passed on the torch” to his sister Stella.

“Stewart is not necessarily one of our full-time movie dogs, so he works when he needs to work, but he’s not always working. So when he does get on set, it’s a fine line of keeping him under control and un-clownish, because he does feed off the energy of the set, so if he does make a mistake and there’s a reaction, he will make the mistake over and over again just because he can get the laugh.”

Would you like to hear more about Stewart's shenanigans? Of course you would. Go ahead and buckle up for an incredible anecdote. In the aforementioned EW feature, Brooklyn Nine-Nine executive producer Dan Goor recalled,

“In the episode where Gina and Terry try to boost Captain Holt’s social media presence by making Instagram pictures of Cheddar, there is a scene where Holt gives a moving speech filled with gravitas about honor and duty. Every time he began that monologue, Cheddar, who was just off screen, would let out a soft, unending howl, which cracked up everyone on set. Every time.”

Are you kidding me? That is a phenomenal story. Stewart was and is forever a comedic genius. Sure, there are other Cheddars, but there was only one Stewart the Corgi who would emit a "soft, unending howl" at the wrong/right time because he wanted to make all of the humans on the Brooklyn Nine-Nine set laugh.

Here's to you, Stewart. That grouchy chinchilla that Lieutenant Terry Jeffords follows on Instagram has got nothing on you. You precious swim trunks-wearing, plaque-finding, wedding cake-gobbling Corgi, you.

More like this
Brooklyn From 'The Bachelor' May Have Accidentally Predicted Her Time On The Show On IG
By Grace Wehniainen
Linda Ronstadt’s “Long Long Time” Plays A Pivotal Role In The Last Of Us
By Brad Witter
Taylor Swift Visited The 'Glee' Set For This Bizarre Season 5 Episode
By Grace Wehniainen
'The Queen’s Gambit' Season 2 Tweet Wasn’t From Anya Taylor-Joy
By Mary Kate McGrath, Jack Irvin and Grace Wehniainen
Get Even More From Bustle — Sign Up For The Newsletter
From hair trends to relationship advice, our daily newsletter has everything you need to sound like a person who’s on TikTok, even if you aren’t.