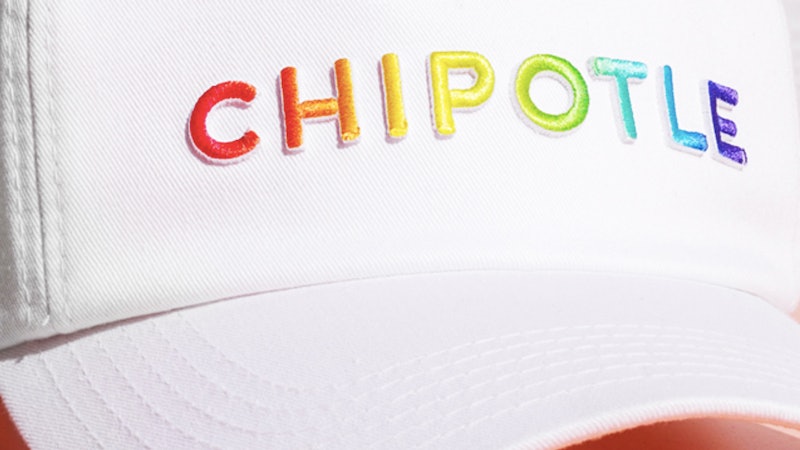 If you, like me, are always looking for an excuse to eat the heck out of some Chipotle, today is your lucky day. Because not only is Chipotle the home of the most generously sized burritos you could want, they also support a damn good cause. Chipotle recently announced its "Love What Makes You Real" campaign for Pride month. This Chipotle Pride collection is available on its website and it looks pretty incredible. And, unlike some companies that just throw a rainbow on their merch to try and steal our dollars, Chipotle is actually giving back.

"Chipotle will celebrate the LGBTQ+ community with limited edition pride gear benefitting The Trevor Project, the world’s largest suicide prevention and crisis intervention organization for lesbian, gay, bisexual, transgender, queer and questioning young people," the company explained in a press release. "In addition, Chipotle will be participating in parades across the country and hosting market wide fundraisers supporting local LGBTQ+ nonprofits." BOOM. That's how you do it.

The merchandise line features hats and shirts complete with rainbows and burritos. One option even includes the epic tagline "¿Homo Estas?" above a rainbow burrito, which is a combination of all of the perfect things I could possibly want in one single location. I'm going to buy that shirt and wear it every day of this month.

Another thing I really like about this line is it tells you exactly how much they are giving to charity in the description of each product. So for the hat that costs $17, it says that $7 of it is going to The Trevor Project. For a shirt that costs $20, it says that $10.50 is being donated. This may seem like a little detail, but it's actually a really important one. Many people in the LGBTQ+ community have gotten sick of brands saying that they're "supporting" the queer community, when really they're just hawking merch they've put a few sequins on. Actually supporting the community means putting your money where your mouth is, rather than just vaguely gesturing or using the rhetoric of "support."

Luckily, the tide does seem to be turning. This year we've seen some brands show up for Pride in a major way. Morphe has announced that they will give 100% of the profits from their Live In Color Pride Collection to The Trevor Project, the same amazing organization that Chipotle is supporting. American Apparel is donating 100% of the net proceeds from its Pride collection to the Los Angeles LGBT Center. Fossil has released a limited-edition watch and 100% of the profit from that will be going to support the Hetrick-Martin Institute. The American Eagle x It Gets Better Collection will donate 100% of its profits to the It Gets Better organization and the ASOS x GLAAD 2019 Pride Clothing Collection will see 100% of its profits going to GLAAD. PHEW. A lot of money going to a lot of good places.

It's great to see companies actually using the money they make during Pride month to help the queer community. Or, of course, you could just skip the middleman and donate directly to one of the organizations that support the queer community, rather than purchasing merch. The choice is yours, but it helps to keep an eagle-eye out and make sure that your money is actually supporting the causes and groups you want it to.

For me, any excuse to love Chipotle is a good one — and eating a burrito while wearing a rainbow burrito shirt sounds like a definite win. It's going to be a very busy, bean-filled month.