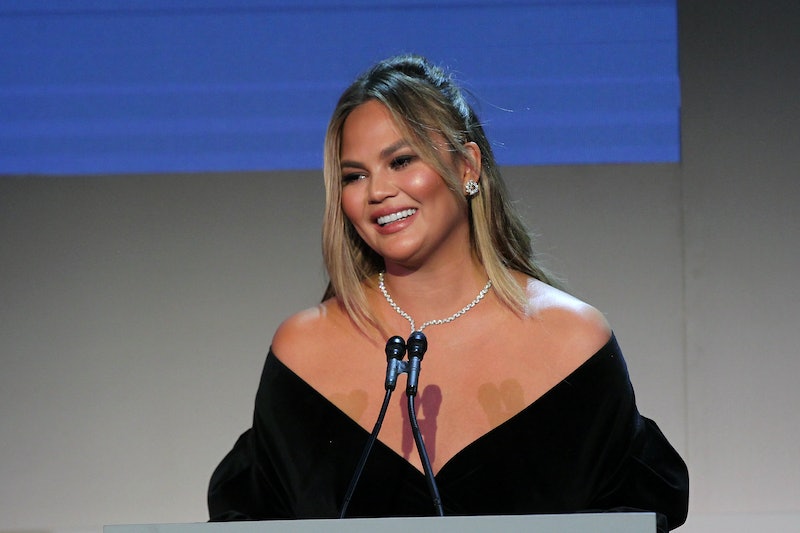 Ron Teigen Sr. has done it again. Chrissy Teigen's dad got a tattoo of Chrissy Teigen for her birthday, because what else do you get for the gal who has everything? The Cravings: Hungry for More author celebrated her 33rd trip around the sun on Nov. 30, and her dad commemorated the day by getting a portrait of her inked to his arm. On Monday, Dec. 10, Teigen shared a photo of her father with his new ink. The tattoo, which is an impressive rendering of Teigen’s visage, was drawn by Shamrock Social Club's Mark Mahoney. Yes, the tattoo is real, and yes, this birthday present is adorable.

Teigen Sr. has mastered the art of the genuinely surprising gift. Last Christmas, he gave John Legend a “Willy Warmer,” which is basically a knit sweater for male genitalia. You know, a totally normal and totally not awkward thing to give to your son-in-law for Xmas.

Another extremely memorable present courtesy of Teigen Sr.? His response to Legend’s Emmy nominations, of course. "Don't have any blank thumb drives but got this" is a timeless present, and that photo of the SD card is the gift that keeps on giving. You may say it is a stretch to call those text messages a literal gift; no, they did not come wrapped in a bow or tucked in a shiny paper tote. But like Teigen Sr., we are keeping things unconventional here.

Oh, and let us not forget about photos of the figurines he carves out of wood. Or about the time he posted a photo of some of his carvings resting on a couch and told his granddaughter to "get back here and take care of your children." Or about the time he gave us a cameo on Keeping Up with the Kardashians. So many terrific gifts. He sure is a generous one, that Ron Teigen Sr.

"MY DAD GOT A TATTOO OF ME FOR MY BIRTHDAY," wrote Teigen, which is pretty much the only thing you can say when your dad gets a tattoo of you for your birthday.

If you happen to be like, "That caption sure sounds like the title of a YouTube video where a teen convinces his dad to get an enormous tattoo of his face on his back, but then at the very end of the video the teen says it is actually a temporary tattoo and the dad breathes the most relieved sigh of relief in the history of sighs," you are not alone.

What a year it has been for Teigen. She put out a second cookbook. She launched a line of cookware at Target. She co-hosted a Christmas special on NBC with Legend. She made another face at an awards show that was turned into yet another hit meme. And she had a birthday that inspired her dad to get a tattoo of her face on his arm. Talk about an ink-ccomplishment.